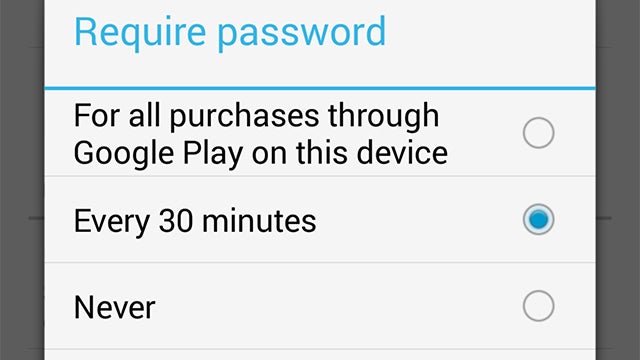 Good news for habitual in-app spenders (or their parents): Android Police says Google's newest Play store update lets you curb spending by opting to require a password for every in-app upgrade. It may not actually stop you, but hopefully it will make you stop and think. Maybe.

The latest Google Play update lets you choose between the standard 30-minute purchase window, and a new setting that requires the password with every purchase. It's just one of the many tweaks to version 4.6.16, including changes to batch install, Settings and Help menus, and security verifications.

The update comes after, among other things, a parent sued Google over her child's $US66 worth of in-game spending on Marvel Run Jump Smash game currency. Both Google and Apple have been under legal and governmental scrutiny over lax systems that seemingly allow children (or full grown adults) to spend on in-app purchases without restraint.

Android users can wait for the update to get pushed to them, or head to Android Police to download the APK now. Or you could leave your purchases unrestrained and see just how much spending you can rack up . [Android Police via The Verge]