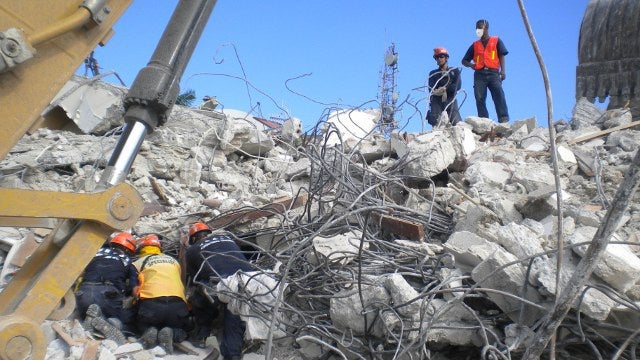 Trapped under rubble, unable to move following a natural disaster, it would be easy to assume the worst. But soon the Wi-Fi hotspot on your phone may be able to help raise alarm — acting as an SOS beacon to guide rescuers your way.

At least, that’s if Amro Al-Akkad, an engineer with the Fraunhofer Institute for Applied Information Technology in St Augustin, Germany, has his way.New Scientist reports that, inspired by cheeky Wi-Fi names near his apartment — like “no smoking on the balcony” and “turn the noise down” — he realised that an app could insert a short SOS message into the name of a phone’s Wi-Fi hotspot too.

In collaboration with emergency workers, Al-Akkad and his team have developed “victim” and “seeker” apps which allow the one to locate the other. New Scientist explains that the app allows a victim to write a 27-character message — such as “need help fire on 4th floor” — and a seeker app can spot it from 100m away. It’s already been successfully used in disaster simulations in Norway.

The beauty, of course, is that phone networks often become saturated during times of disaster, while a Wi-Fi hotspot will go about its own business. There does, of course, remain the issue of limited battery life when using a smartphone as a hotspot — but it’s at least a step in the right direction. The work will be presented at a computer interaction conference in Toronto in April. [New Scientist]