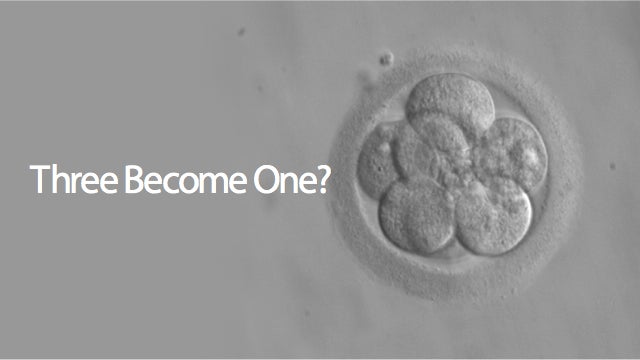 The US Food and Drug Administration has this week embarked on discussions on a topic sure to prove controversial: the idea of creating embryos from the DNA of three people.

The Associated Press reports reports that the FDA is investigating whether or not it should allow the new procedure. Current research in animals suggests that the technique, which combines DNA of two parents with that of a third female donor, results in seemingly healthy offspring.

Indeed, supporters of the technique claim that it could be used to prevent children from inheriting some genetic diseases. Those claims, however, are countered by some rather more conservative voices, who have concerns that it could lead to the development of designer babies. Either way, as Michigan State University’s Keith Latham points out, this is a process that shouldn’t be rushed:

“The end of the experiment will come decades later. It’s going to take us that long to figure out the health of the progeny produced from these procedures.”

In the meantime, the FDA is gathering evidence from experts in the field before it makes a decision. Those include Shoukhrat Mitalipov from the Oregon Health and Science University, who has so far produced five healthy monkeys using a technique which swaps out defective mitochondrial DNA in the eggs of a prospective mother with those from a healthy donor.

With an estimated 1 in 4000 US children inheriting diseases due to mutations in their mitochondrial DNA, the three-person embryo could save future parents significant heartache — but the ethical concerns certainly need to be ironed out before that can happen. [AP via Verge]