Tacos, Moviefone And Vibrators: My Most Interesting OkCupid Date Ever 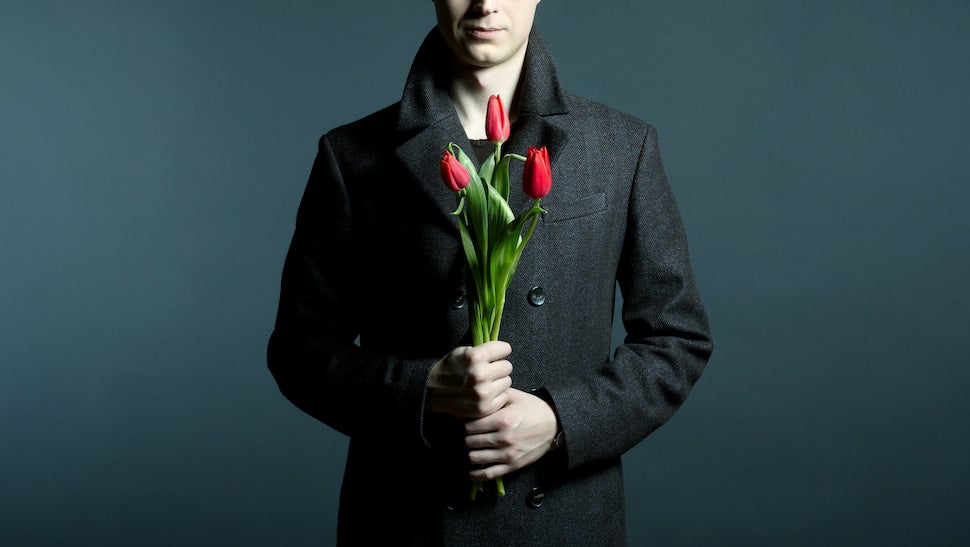 I was excited about this one. It had been a while since I’d dusted off the old OkCupid profile. I’d been working a lot and thinking about my ex too much, and this girl looked cute. So, when she actually agreed to a date, I was thrilled. This one felt important!


She suggested brunch, which was strange. Usually, I go for drinks on the first date with someone I met online — or in person, really. That way, if things get weird, I could slug down a beer and pretend like I had somewhere to be. A meal is necessarily more involved. There’s table service, multiple courses, juggling with the check. There’s also the simple struggle of chewing food in front of a complete stranger, one who you presumably might want to bone. At the same time, it’s a little unsettling that this kind of protocol exists. It makes online dating seem less like a seductive dance that helps you find your soulmate and a little more like the noisy floor at one of Henry Ford’s factories.

But brunch can be fun, I thought, and people gotta eat. My date lived in the neighbourhood, so I suggested the taco place around the corner. They have the best chilaquiles.

I knew from the second I sat down that the chemistry wasn’t there. It’s hard to say why, but sometimes love hits you in the gut, and sometimes it doesn’t. It didn’t. But, hey, I tend to be a pretty optimistic guy. Even if I wasn’t ready to marry this girl, surely we could have an interesting conversation.

I was not prepared for what came next.

“So you’re from Miami?” I said when the coffee arrived. There was something about South Beach on her profile. I spend Mother’s Day in Coconut Grove with my mum every year. We had a little something in common! She said she was indeed from Miami, but they had moved. For whatever reason, it was an easy lead-in to the inevitable what-do-your-parents-do question. I almost never ask that question on dates, but this time I’m glad I did.

“My dad is an inventor, actually,” she said. My eyes popped open.

“Oh wow,” I said, leaning forward. “That’s pretty interesting. What kinds of things does he invent?” In my head, I’m picturing Rick Moranis in Honey, I Shrunk the Kids and some awful contraption that takes up the whole kitchen but can cook toast with the press of a button.

“Lots of things actually,” she smiled a little. “Have you ever heard of Moviefone?”

“Oh my God, of course!” I said, too enthusiastically. I’ve always been a movie junkie and having grown up in rural Tennessee, where the paper didn’t always make it onto the lawn, I used Moviefone all the time growing up. “Your dad invented Moviefone?”

“Well, he invented some of the technology that made it work,” she said. I didn’t press the issue. “But his role was big enough that he made enough money to retire when he was young, so he could pursue passion projects.”

I swear to God, I was expecting her to say that he got into remote-controlled aeroplanes or carpentry or something next. She did not.

“Well, then, did he keep inventing?”

“That’s the thing about inventors, I guess,” she said. “They can’t stop inventing. My dad was that way.” She paused. “So after Moviefone, he actually invented a finger-mounted massager.”

I paused. And in fact, my mind went to the most innocent of places. I pictured something they might sell at Brookstone. She realised I was confused.

“So it’s actually the same technology that’s used in a lot of vibrators these days.”

I dropped my fork. My memory tells me it was an accident. The food was… slippery. I wasn’t… paying attention. I was… picturing 9-inch-long cylinders of pleasure stacked up in this cute girl’s house. This was a new experience.

“Actually, the new toy that Trojan’s selling violates my dad’s patent. We’re in the middle of a lawsuit, but I think we’ll end up settling outside court.”

I picked the fork back up. Shoveled a mound of chilaquiles into my face and chewed it. Not knowing what to say, I was hoping she’d keep talking. She did.

“It probably sounds a little weird, but since my dad died, it’s sort of become the family business.”

She went on to explain what sounds like the most fascinating childhood I’ve ever heard of. Her dad’s prominence in the world of sex toys meant that there was overlap with the adult film industry which meant that she would go to the AVN Awards as well as sex toy expositions. From how she described life in Miami, it sounded like porn stars were in and out of her house on a regular basis. It was like a deleted scene from Boogie Nights, in my mind, except shot in Miami sometime in the early 1990s. “Sexually liberated” felt like a G-rated version of what her actual outlook must be. Maybe this is what I’d been missing?

I didn’t ask how he died, but it seemed like it had happened a while ago. At this point, the check was on the table. She told me more about the house she grew up in, and how most of her extended family lived within a few blocks. And, presumably, they all helped run the family sex toy business. For someone brought up in the buckle of the Bible belt, this was all both very unbelievable and very intriguing. I felt a little intimidated and very prude. I’d been on a decent number of digital dates, but this was an entirely new sensation. This was the most interesting OkCupid date ever.

We said goodbye, and I never saw her again. I still don’t know exactly why. It didn’t have anything to do with her dad being a kingpin in the sex toy industry. That was really interesting! She was cute, but she was very young. That didn’t seem like the right thing for me at that point in time. And above all, I didn’t feel much of a spark with the girl. No, despite the very curious, very real talk about sex toys and the adult entertainment business, I did not want to keep going out with her simply to see what would happen in the bedroom.

In retrospect, I didn’t really think much about the date until this week, when I heard that Moviefone was shuttering its telephone service. I saw the quotes from the founders and got curious. I wondered if her dad might be mentioned. So I started Googling, first for “moviefone inventor” and then “finger massager patent” and eventually “trojan lawsuit.” Nowhere could I find evidence of an inventor who was involved in Moviefone and the sex toy industry who had died. In fact, I didn’t see an inventor mentioned anywhere.

That’s when it crossed my mind that this girl might have been a tremendously creative pathological liar. It was a pretty ridiculous story!

But, truth be told, I don’t care. If she was lying, she gets points for being bold. I don’t think she was, though. Inventors are often behind-the-scenes people, who don’t really get credit for things the way that founders do. Plus, in my research, I was also only willing to click so many levels deep into the sex toy stuff. I do work in a polite office, after all. And the fact that I couldn’t find anything about a Trojan lawsuit didn’t mean much. Disputes that are settled out of court are intentionally kept out of the press.

What I did take away from the whole experience is a new sort of appreciation for online dating. I often thought of failed OkCupid dates as a waste of time, an evening I could have been drinking beers with friends instead of sipping cocktails with strange women. Sometimes, it resembles a weird factory farm environment, where all of the necessary steps are there — more or less in the right place — though none of them seem to work as planned.

These are women I would have had great conversations with if I had bumped into them at a party or chatted with them by the water cooler at work — regardless of whether they grew up in a sex toy empire or not. Because we met under this pretense, however, it would’ve been weird simply to call my new friend from Miami the next weekend and ask if she just wanted to be pals.

If only there were some sort of online website where you could find people with similar interests who say interesting things and might live near you and who might even just want to be friends.