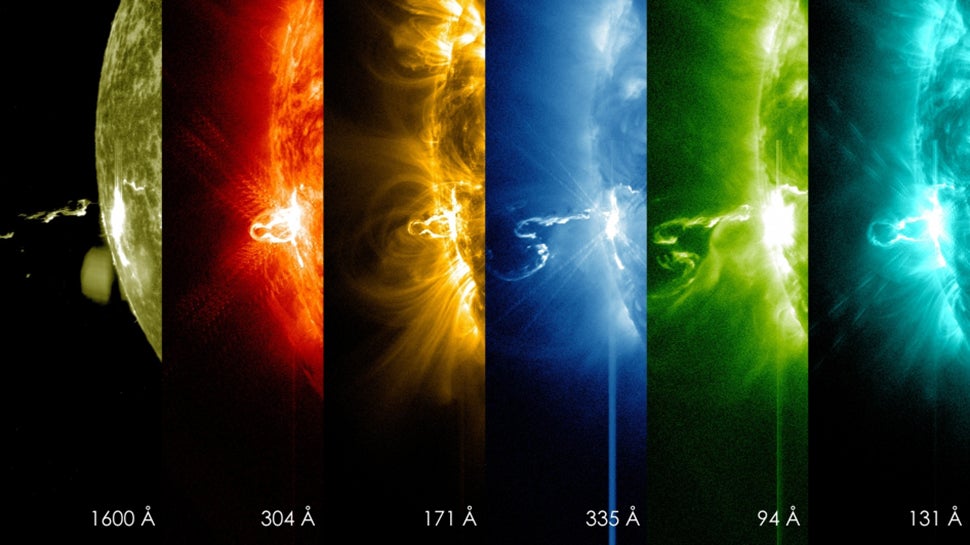 Yesterday, the sun spewed out an X-class solar flare. It hit its angriest peak just before 8pm last night, and NASA’s Solar Dynamics Observatory — which is on sun watch 24/7 — caught it on camera through six different wavelengths.

Here’s a little explanation from NASA on the series of rainbow-hued shots you’re looking at:

These SDO images from 7:25 p.m. EST on Feb. 24 show the first moments of this X-class flare in different wavelengths of light — seen as the bright spot that appears on the left limb of the sun. Hot solar material can be seen hovering above the active region in the sun’s atmosphere, the corona. Solar flares are powerful bursts of radiation, appearing as giant flashes of light in the SDO images. Harmful radiation from a flare cannot pass through Earth’s atmosphere to physically affect humans on the ground, however — when intense enough — they can disturb the atmosphere in the layer where GPS and communications signals travel.

We’ll never cease to be amazed by the wonders we can see, thanks only to NASA’s constant space surveillance. [NASA]