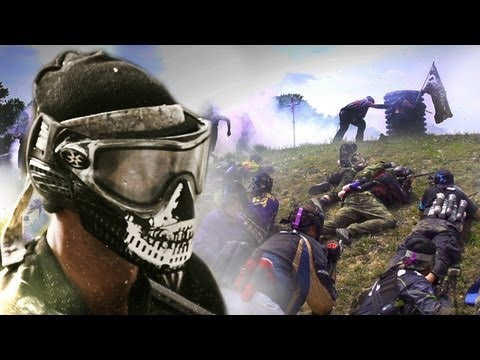 Our good friend and FPS Russia was there hosting the event, and rounds ranged from all out skirmish through to capture the flag, and another round which saw players change the orientation on the totem to score points: the longer the totem was on your colour, the longer you were in the lead. This is where the bullets really started to fly. You’d be forgiven for thinking a swarm of angry bees descended on the event at times, but those really are just paintballs flying through the air looking for their targets.

The fields came complete with forests, deserted buildings, walls and windows for cover and firing exercises and players were encouraged to bring their favourite gadgets. Buggies and armoured vehicles were on the field, and one player even fitted a wheelchair with tank tracks to make getting around the field easier. Craziness.

The video illustrates just how crazy the two-day event was, but heads-up: it’s a tad NSFW-ish thanks to a weird bikini contest that took place at Living Legends. Some of that footage — that is, three or four seconds in the middle and at the end of the video — made it in. You were warned.