Lock-Picking Cockatoos Sure Are Smart 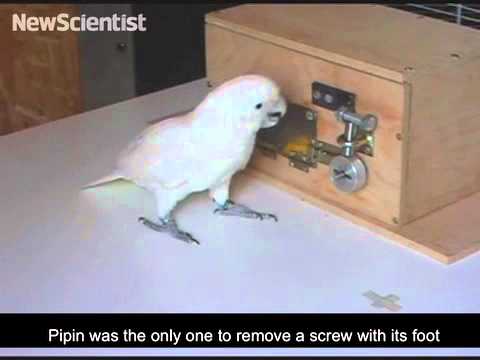 If you’re planning on getting a pet cockatoo, be warned: you might need to invest in better security! A study conducted by the University of Oxford, the Max Planck Institute and University of Vienna has shown that not only can these intelligent feathered creatures disassemble basic locks, but quickly adapt to changes in mechanisms.

Ten cockatoos had their lock-breaking skills put to the test, with the results published recently in Plos One. The experiment required the birds to open a box containing a treat, visible through a clear window. Keeping the box secured was a locking mechanism that required five steps to disengage.

According to the report, one bird in particular, a fellow called “Pipin”, managed to get inside the box within two hours, completely unassisted and having never been exposed to the lock previously. While he was the exception, the other animals performed well too — after figuring out the lock once, the birds were able to repeat the procedure easily.

But that’s not all. The researchers then rearranged or removed parts of the lock to see how the birds would adapt and sure enough, they did. If they noticed an earlier part of the lock missing, they’d try the next section in sequence.

Of course, the cockatoos didn’t perform flawlessly — some had to be taken through the process step-by-step, or watch another cockatoo perform the sequence, but the results were still impressive. From the report:

The ‘assisted’ subjects, nevertheless, also showed an almost perfect ability to replicate individual lock removals once they had succeeded once. Such ability to quickly repeat successful actions does not necessarily have to be uncharacteristic of reinforcement learning. However, since the removal of some individual locks (e.g. bolt, wheel & screw) did in itself require a distinct set of spatio-temporally adjusted motor actions, the birds’ sudden improvement in removing them does indicate pronounced levels of behavioral plasticity, sensorimotor control and practical memory in this species.