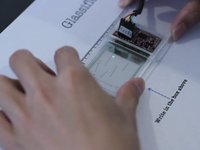 Glassified is a prototype by Anirudh Sharma, Lirong Liu and Pattie Maes, three MIT students who are part of the FIG group. Their device is simple, in theory: It’s a clear glass ruler, embedded with an OLED panel and a Wacom digitiser connected to a nearby computer. When you use it to draw a series of lines, the Wacom recognises the pen strokes and performs an analysis on them, relaying that information back to you via its OLED screen. For example, it can tell you the angle of a triangle or length of a line, or the area of a polygon. But as Sharma and co demonstrate, it can also act like a game: Draw a couple of lines, and it will use them like a maze for a dynamic ball.

It’s still a long ways from reality, but Glassified is a pretty neat demonstration of how to make traditional drawing tools “smarter”. Earlier this year, when Adobe announced its Project Mighty — a smart stylus and ruler that interact with your iPad — we got a glimpse at how larger companies are approaching the conundrum of connecting physical and digital drafting. Glassified shows us another route: rather than redesigning the act of drawing, this little device could bring the benefits of the digital to what we already know. [Anirudh Sharma via Creative Applications]