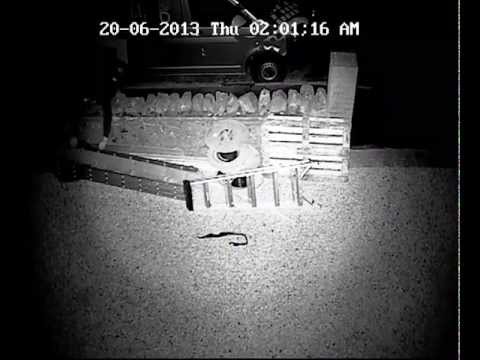 In the perp’s defence, it wasn’t immediately apparent that the roughly $300 in ladders that he stole from Barrie Smith belonged to someone whose entire livelihood revolves around cameras that catch people stealing things.

They were out in a garden, next to a building that doubles as the headquarters of Smith’s Kubix IT installation business. Still, that doesn’t excuse just how shoddy the larceny was. According to Smith:

He was not a very good thief. His clothing has some really big logos on, and he looked straight at the camera. He could not have been more obvious.

He was so obvious, in fact, that it only took one day of posting the footage on Facebook to come up with a name and address for the suspect. Smith passed the info along to the police, who found not only the ladders, but the suspect himself, wearing the exact same clothes he had been at the time of the robbery.

The man was arrested and put on what amounts to probation. Presumably he’s learned his lesson, and is counting his blessings that at least he didn’t get caught stealing from a shotgun store.