You Will Never Beat This Hustling Robot At Air Hockey 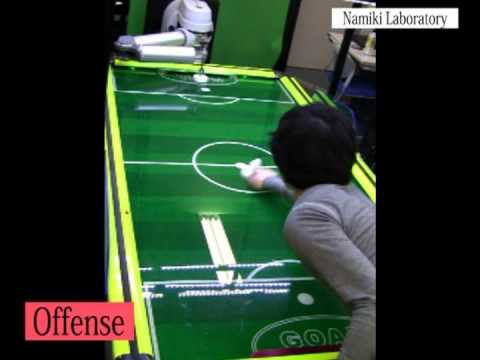 The robot’s four-axis arm is assisted by a pair of high-speed cameras that continuously track the trajectory of the puck, guaranteeing a human opponent will never be fast enough to score. But what’s particularly depressing for humans is that while this robot would have no trouble absolutely dominating a game, it’s actually programmed to study its opponents’ playing style and compete in a way that keeps them wanting to play.

In other words, the robot’s also playing a psychological game, stringing its human opponent along, letting them think they have a chance of winning when in reality they do not. So as impressive as its air hockey playing skills are, the real breakthrough here is the development of what could be the world’s first artificial hustling intelligence. [Nakimi Laboratory via IEEE Spectrum]