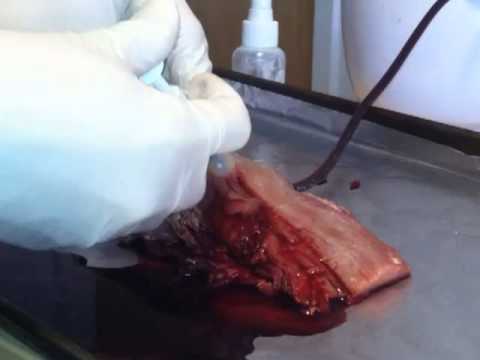 This is either some sort of magical sorcery, camera trick or freaking awesome science-fiction technology coming to real life. The Veti-Gel is a substance that can be applied to a wound and stop the bleeding immediately. It’s insane how fast it works.

Watch the video above to see Veti-Gel in action (don’t if you’re squeamish about blood). It’s shown working on a pork loin that’s being pumped with blood. You can see blood spilling out of the loin when the cut is made and then suddenly stop once the gel is applied. This is Mass Effect in real life. How does it work?

The Veti-Gel was created by New York University student Joe Landolina, who used plant polymers to instantly seal up open wounds. Basically, his synthetic creation links up with the human body, reassembling that feels and acts like skin. What’s even better is that Veti-Gel also helps the healing process too. Landolina told Humans Invent:

“It works in three ways,” says Landolina. “The first way is it works as a tissue adhesive,” he explains. “It actually holds its own pressure onto the wound so you don’t have to do it. Secondly, when it touches the blood, it does something called activating Factor 12.”

This activates fibrin, which is the polymer you need to make a blood clot, explains Landolina. “Finally, it activates platelet cells.” The gel causes these to bind to the fibrin, causing a tight seal.

The gel basically mimicking what the human body does but at a much faster rate. Landolina has been talking to the military about the Veti-Gel as they have an obvious interest. He expects clinical trials to begin within a year and a half. Read more about the fantastic healing gel here. [Humans Invent via BoingBoing]