This Beautiful House Folds And Rotates To Match The Weather 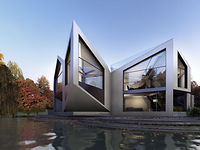 The creators, David Ben Grünberg and Daniel Woolfson, have started a business, called “The D*Haus Company” to promote the concept, called — unsurprisingly — “The D*Haus”. Grünberg first conceived of the design to deal with the “extreme temperatures” of Lapland in Finland, where the mercury bounces between 20°C to -20°C, depending on the season.

Of course, that temperature range covers a lot of places, so the design could be used anywhere, so long as the neighbours don’t mind living next door to the most boring Transformer ever.

Sadly, the video above is constructed from real footage and CG, so no, this miracle building doesn’t really exist in a verdant forest wonderland on the edge of a river. In an article on Dezeen Screen, Woolfson mentions that they’re still trying to figure out exactly how the building would “work in reality”, a somewhat significant stepping stone to a liveable prototype.

If you’re not too worried about getting enough light, then a cheaper, more immediate option might be an air conditioner, a desk fan, or Optimus Prime.

[The D*Haus Company, via Dezeen Screen]