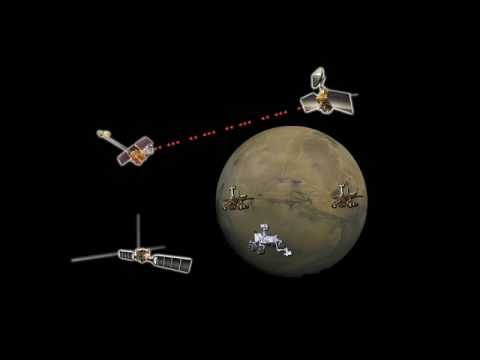 How do you remotely drive a small LEGO robot sitting on a desk in Germany from the ISS? With the internet, of course — the only problem is getting a decent Wi-Fi signal in low earth orbit. That’s why NASA is developing a new means of beaming information across the depths of space they refer to as Interplanetary Internet.

Officially known as Disruption Tolerant Networking (DTN), this communications protocol could allow future fleets of spacecraft and satellites orbiting the moon or Mars to easily communicate with Earth. “The demonstration showed the feasibility of using a new communications infrastructure to send commands to a surface robot from an orbiting spacecraft and receive images and data back from the robot,” Badri Younes, deputy associate administrator for space communications and navigation at NASA Headquarters in Washington, told Physorg. “The experimental DTN we’ve tested from the space station may one day be used by humans on a spacecraft in orbit around Mars to operate robots on the surface, or from Earth using orbiting satellites as relay stations.”

To accomplish such a feat, the DTN must be able to account for the massive lag times and dropped packets that are an invariable part of high-latency space environments. It does this with a core architecture that isn’t far off from the Internet Protocol we’re used to here on Earth, but accounts for a much higher error rate and doesn’t assume an unbreakable end-to-end connection. Instead, it automatically stores transmitted data at each node until the next node becomes available. So, say we deploy a series of satellites to orbit every planet from here to Neptune and send an exploratory probe there as well. The data that the Neptunian probe compiles wouldn’t have to be sent in one long shot from the eighth planet all the way back to us. It can simply transmit it a smaller distance (with less packet loss) to the orbiting satellite, which can send the information back to Earth bouncing it along each of the planetary satellites. The satellite orbiting Saturn may have to sit on the data sent from the satellite above Uranus for a while, but as soon as the Jupiter satellite comes within range, the data will be transferred.

“With the new system, delays caused by spacecraft moving behind planets or solar storms disrupting communications are not a problem because the data packets are not discarded when the outages occur, but instead are stored as long as necessary until an opportunity arises that allows them to be transmitted”, said Adrian Hooke, manager of NASA’s Space DTN project at NASA Headquarters.