Monster Machines: The G-Nius Guardium Guards Golan Like A Golem 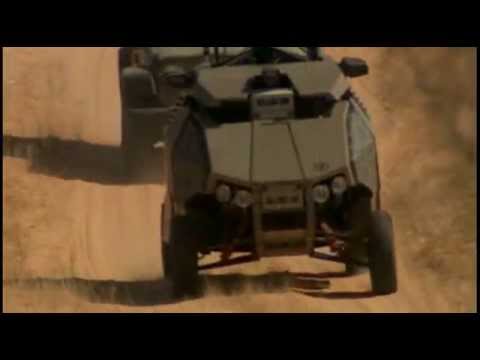 The Guardium is an Unmanned Ground Vehicle (UGV) created by G-NIUS, an industrial-security coalition between Israel Aerospace Industries and Elbit Systems, and employed by the Israeli defence Forces for patrol and ISR operations.

The original Mk I, which we first saw way back in 2008, is still widely used today to guard perimeters and high value civilian targets like airports, as well in field operations where it acts as forward scout and IED decoy.

The Guardium is based on the TomCar chassis and can be controlled either remotely by a mobile command station or drive itself over a pre-programmed route using its automated tactical positioning system at nearly speeds of 50 MPH. Each Guardium system transmits data to and is controlled by a remote C4I (command, control, communication, computer, and intelligence) centre, which processes the continuous flow of data coming in from each unit and issuing new commands as operations progress.

What’s more, it features a wide array of modular plug-n-play sensors that can be quickly switched out to suit the changing circumstances — an EO/IR camera, ECM/ESM systems, Hostile Fire Indicator (HFI), Missile Approach Warning Systems (MAWS), a Laser Warning System (LWS), a two-way audio link, chemical snifters, R/C weapons systems — both lethal and benign — even an RFID Interrogator. And since it doesn’t need all the extra bells and whistles required by a human driver (like seats and a steering wheel), the Guardium has room to pack up to 1.2 tonnes of gear to the front lines 24/7 without regard to the weather.

“We often patrol alongside infantry forces. We operate parallel to the infantry, on a path much closer to the fence,” Explained Guardium Platoon commander Lt. Kai Hajbi. “We provide an extra set of eyes that are looking from a more dangerous position while keeping soldiers out of harm’s way. We rely on infantry to deal with hotter events, but they rely on us just as much. It’s a symbiotic relationship.”

Primarily though, the Guardium is designed for guard duty — days and days of continuous unblinking guard duty. “We’ve seen several scenarios where the Guardium has proven its effectiveness,” continued Lt. Hajbi. “In one scenario, a mortar had struck the fence punching a whole through it. The Guardium provided 103 consecutive hours of around the clock surveillance without tying up essential infantry forces or placing soldiers in danger.”

But for all the accolades the MK I has earned, it can’t hold a candle to G-NIUS’ newest iteration, the Guardium MK III. While the MK I may have been built on a glorified go-kart chassis, the MK III more closely resembles an R/C Toyota FJ. It’s stronger, faster, and more manoeuvrable than its predescessors — capable of toting up to 2000kg of gear at speeds topping 120 KPH.