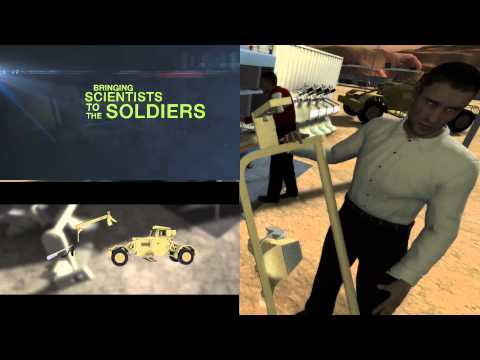 The Mobile Expeditionary Lab may look like a standard shipping container from the outside, but it’s packed with $US2.8 million worth of cutting-edge fabrication equipment as well as its own generator and heating and cooling system. Developed by the Rapid Equipping Force, a specially mandated organisation within the Army created in 2002, its purpose is to provide immediate technological solutions for the unique challenges soldiers may encounter during Operation Enduring Freedom.

Each lab is outfitted with a Rapid Prototyping 3D Printer, a CNC machine, plasma cutters, welding equipment, and more hand tools than even the A-Team know what to do with. These labs are staffed with by pair of engineers, both of whom are rotated out every four months. All of which adds up to a lightning-quick development cycle.

“Our main focus is to make sure that [soldiers] get the equipment they need quickly,” said Jose Olivero, the REF chief of operations told ARNews. That means bypassing the traditional Pentagon bureaucracy, which may require months or years of field-testing before deploying new equipment, and crafting situation-specific solutions in small batches. This allows the REF to distribute the new equipment directly to the troops that need them most in a matter of days or weeks.

The MEL does not create standard army gear such as boots and rifles, mind you. “They are not really inventing something new; they are modifying something that exists already so they can do something else,” Newell explained. Instead, the REF develops devices like the PackBot, an RC robot used extensively in EOD operations; PILAR, an acoustic system used to pinpoint sniper fire; and the Sand Flea, a tiny rover capable of hurling itself over 30-foot walls.

The REF deployed its first MEL to Afghanistan this past July, and already has plans to send over two more before US troops withdraw in 2014. [Military.com – Wikipedia – Army 1, 2 – Defense Tech]