Vampires vs. the Bronx is coming to Netflix. (Photo: Netflix)

Vampires Vs. The Bronx Pits Kids Against the Monsters in Their...

Ford Actually Offered This Driver’s Work Table In Australia In The...

Why Are VR Headsets So Bulky?

How to Use Your Phone as a GoPro

The HyQ Is A Robotic Italian Stallion 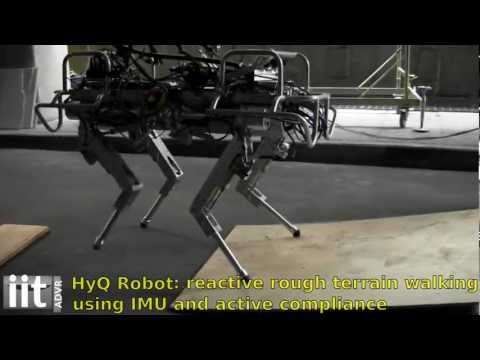 Led by Professor Darwin Caldwell, a team from the IIT’s department of Advanced Robotics has spent nearly half a decade designing, building and testing the metre-long, 70kg hydraulically driven quadraped — Hydraulically driven Quadraped, HyQ. Being hydraulically activated and constructed from lightweight aluminium, the HyQ is one of a handful of robots capable of the instantaneous corrections needed for off-road deployment. It employs 12 active joints — eight hydraulically powered, four electrically powered — to generate the necessary torque for moving nimbly over rough terrain. And boy can it move. As you can see in the test video above, the HyQ is not only capable of bounding up inclines, trotting along at 2m/s, and actively avoiding obstacles but also leaping vertically, clamouring over and around debris, even rearing up on its hind legs (just needs a simian Lone Ranger riding and the effect will be complete).

To accomplish these feats, the HyQ relies on a force-feedback system that monitors the pressure on each foot and adjusts each leg’s stiffness in response by rapidly pumping hydraulic fluid in or out of the actuators. These actively compliant legs are a key feature on the HyQ — as is its open source design. “BigDog is a black box — nobody knows exactly what designs, materials, controllers they are using,” Claudio Semini, a researcher responsible for HyQ’s hardware and a founding member of the project, told IEEE “We want to make our design as open as possible.” And, apparently, as attractive. [Forbes – Engadget – Spectrum IEEE – IIT]