A soldier tries to sleep. But he is not safe in his dreams. Jolted awake by a nightmare, the combat veteran fumbles in the dark for his 3D glasses.

He puts them on. Around him are the faces of people whom he trusts. They fight the darkness with him. The soldier's relived this scene in his head and the laboratory over and over again, until it has become reassuringly familiar. The soldier knows that his pixellated friends will take him away from these troubled dreams. When the scene is over, he takes off his goggles and looks around him. The soldier is home.

The US Army wants this dream sequence to become reality. In an Army-backed experiment called "Power Dreaming", Naval Hospital Bremerton in Washington State will help traumatised troops battle their nightmares — with soothing, digitally-made dreams crafted in virtual worlds. No, this is not the script for the sequel to Inception.

The research project is in its early planning and is not expected to launch until next year, a hospital spokesperson told Wired's Danger Room. But it is picking up momentum. Last week, the Army awarded almost half a million US dollars to a consulting company for help developing the experiment.

52 per cent of combat veterans with PTSD (post traumatic stress disorder) reported having nightmares fairly often, according to the National Vietnam Veterans' Readjustment Study. "During our conscious hours, most can hide what they have become," according to a presentation delivered to the Uniformed Services Academy of Family Physicians, a nonprofit group. "But in sleep, this vigilance slacks and the dream world can become a frightening and uncontrolled experience with waking consequences."

So the researchers will ask troops to take control of the "creation of the customised healing imagery (therapeutic dreams) to counter the impact of nightmares," according to a military contracting document.

The hope is that these "power dreams" can be watched from laptops and "home training and 3D goggles work to gradually enhance the strength of these new neurological images," according to the presentation that outlines the program's aims. 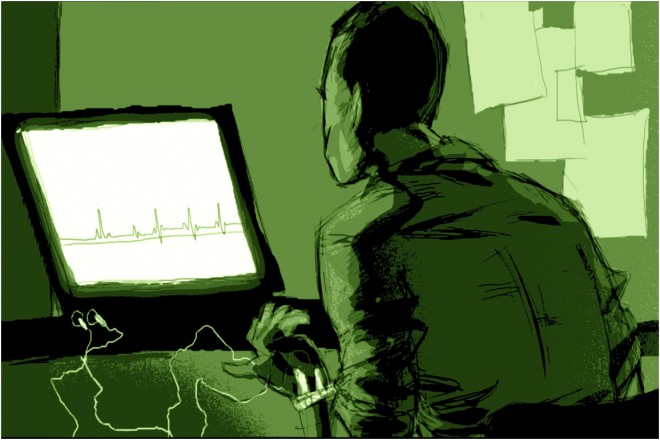 The project is another twist on biofeedback therapy, in which a PTSD-sufferer is fed real-time data on his physical stress levels so that he can be cued to calm down. If he successfully brings down his heart rate and anxiety levels, he may be rewarded with visual cues. One example of this brain-wave therapy is in use to heal troubled veterans.

The problem with existing biofeedback methods is that many patients aren't able to easily call up imaginary scenarios in their heads that will cue them to relax. So this experiment hopes to get soldiers to custom-design scenes that they can play back to themselves.

The computer program for soldiers to build out imaginary worlds and avatars on will be based on the virtual world Second Life. It will allow dream sequences to be custom designed "to develop physio-emotional states to counteract the reactive stress response inherent in trauma memories."

"The model is to develop imagery that is both customised by the [soldier]and neurologically ‘distracting' to stimulate the development of a clinical relaxation response," contract documents say.

The hope is that the soldier "learns to activate the parasympathetic dream scenarios when aroused by traumatic memories by using 3D goggles, coping successfully with intrusive nightmares," according to the presentation.

It won't be easy. And there will be security hurdles, as well as technological ones, if dreams are downloaded from hospital computers onto soldiers' laptops. Because of military concerns about data breaches, there are restrictions on the use of removable hard drives and USB ports on military computers. There is also the issue of getting the right software to allow safe file transfers. "Navy systems don't jibe with civilian systems," said a hospital spokesperson. "We are striving to have a computerized method to do it that is safe and secure."