Closest Thing To A Holodeck Used To Molest 3D Fairies 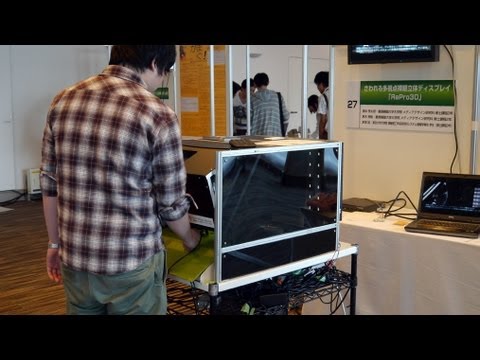 I dream of having a room full of interactive 3D holograms, much like those found in Star Trek and X-Men. This interactive holographic system, which combines a glassesless 3D parallax display with a touch sensor, gets me closer to that dream.

Unfortunately, this slice of the future shown here is wasted on a game demo predicated upon diddling a 3D sprite. The technology, called RePro3D, involves a 3D image generated from a projector array that’s viewed through a half-mirror, causing the 3D effect. Then a tactile sensor is placed around the finger which gives the sensation of touch when someone violates interacts with the object. That said the see-saw demo that begins at 1:40 in the clip looks pretty damn fantastic. [TechCrunch via SlashGear]