Kyle Stanbro’s a big dude. When he had to strap on all his gear, especially the communications gear that patched him in to the watchful drones overhead, he added another 55kg.

In the early years of the Afghanistan war, much was made of how commandos on horseback called in airstrikes from the middle of nowhere. But the gear used for doing so was hardly ideal. Strapped onto Stanbro was a “coffee can” antenna and a receiver “the size of a bread box,” he recalls. And if you wanted to see the video from a drone or a spy plane, you were in for a treat: you had a ToughBook attached to your chestplate, and you’d look down at the laptop screen for viewing a potential target. Since you might very well be running and shooting while watching drone footage – the ToughBook smacking you in the chest as you moved – you had to look away from the Talib spraying you with AK fire.

So when Stanbro retired from the military in 2004, he put his energies into shrinking everything down and making it lighter and more physically intuitive. It led him to build something called the MOVER-IV. The footlong black push-button device looks like a standard radio. In fact, it’s a receiver for real-time video that patches into an eyepiece to display the feed. Weighs just 1.3kg. He’s sold over 100 of them to the U.S. Special Operations Command. 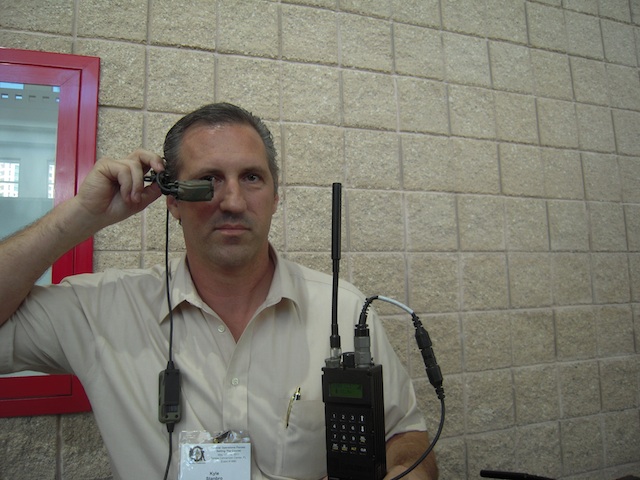 If that sounds familiar, it might be because you read Danger Room alum Nathan Hodge’s piece for the Wall Street Journal about commandos’ access to digital imagery during the Osama bin Laden raid. “[T] roops may have carried small, portable receivers that allowed them to watch the video feed being shot by an aircraft overhead,” Hodge wrote. “Some of those receivers look something like a rugged iPad; others can be worn, with small monocular screens that clip onto helmets.”

Stanbro (pictured , above) wasn’t part of the Abbottabad mission. So he can’t say how the SEALs watched video from the stealth drone overhead. But that’s throat-clearing. “Coincidentally,” he says proudly, “that sounds very similar to this system right here.” His Galaxy tablet provides another display for the footage, one that can be velcro’d onto a vehicle dashboard.

For years, U.S. troops have been outfitted with a system called ROVER, which was supposed to let infantrymen watch overhead footage on a tablet computer. In practice, the things were often too heavy and too finicky in the heat to bring on patrol. MOVER doesn’t have those issues. But it does share a flaw with ROVER – and the whole drone-video-to-the-ground construct, as currently assembled. The video feeds are sent in the clear, unencrypted. Which means the footage could be intercepted by a clever adversary. (The next gen of MOVERs should provide a partial solution. It’ll be years before all the drones get encrypted transmitters, though.)

The eyepiece Stanbro selected for the MOVER-IV is the Vuzix Tac-Eye, a lightweight high-resolution screen that attaches to a helmet and fits neatly over your non-dominant eye. (You want to keep your dominant eye free for shooting.) Stanbro gestures to his partner, Clark Dever of Vuzix, who hooks up a camcorder to another MOVER-IV and starts filming a hallway in the Tampa Convention centre, where the Special Operations Forces Industry Conference is in full effect. Stanbro hooks up the Tac-Eye to his MOVER-IV through a standard six-pin connector and hands it to me.

As Dever moves the camera around, I see a group of businessmen behind me, chatting someone up on the virtues of their own defense-related product. They show up as dense, dark objects on a green screen. My other eye is free to see ahead of me, and my peripheral vision out of both eyes is clear. This may have been what it was like to keep one eye on the inside of bin Laden’s compound and the other on whatever the stealth drone picked up outside.

It works with more than drones. If there’s a manned spy plane overhead, the MOVER-IV just needs the frequency or the band over which it securely broadcasts to receive the video feed, a process of pressing two buttons on the device. “Personal experience” got him several of those frequencies, he says.

Beats having a ToughBook on your chest. Or anything that would get in the way of your parachute opening.