Spirograph Draws Pictures That Are Bigger Than Your Apartment 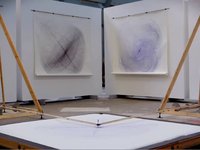 I’m no artist. I couldn’t draw a stick figure to save my life. But even I would be able to make a kick-arse sketch using this insanely cool, 2.7m tall, room-sized spirograph by artist Eske Rex. (It takes up 35sqm!)

As you can see from above, two stands are orientated at 90 degrees to one another over a giant canvas. Two arms extend from either stand, and where they meet is the real Van Gogh in this equation – a ballpoint pen. Weighs as much as 75kg are suspended from either stand to keep the momentum going. Whoever’s the “artist” swings one of the pendulums – or if he’s feeling crazy, both – and gets to sit back and relax while the physics-driven Drawingmachine does all the hard work. When it’s done, you’ll have a 2.7m by 2.7m image of ovals, circles, ellipses – basically anything but a square.

Rex has a background in carpentry, which explains quite a bit as to how he constructed such an interesting piece. Oddly enough, he’d never heard of a spirograph before inventing the Drawingmachine; rather, he was inspired by the harmonograph. [Eske Rex via Drawingmachine, The Atlantic]