Earlier this week, the guys at Pioneer let me drive around in one of their cars for a couple of days to test out the AVIC-F10BT in-dash satnav entertainment system. And now that I’ve tasted the supple delights of the AVIC, my own car’s stereo system seems old and tired, like a Hollywood starlet who’s let herself go. My satnav – once the pride and joy of my glovebox – now seems clunky and cumbersome. If I could, I’d take my car and the AVIC system to Vegas and get them hitched, because the simple fact is that they belong together.

The AVIC-F10BT isn’t just an in-dash satnav – it’s a complete in-car entertainment system. On top of its 7-inch touchscreen display, the AVIC comes with dedicated cables installed into your glovebox for connecting an iPod or USB device, a DVD player and SD card behind the screen and built-in stereo Bluetooth. There are so many different elements to this product that the only real way to review it is to break it down into sections. In the glovebox of the car is an iPod cable. It’s quite long, so you could run it all the way to the back, although you probably wouldn’t. Once you plug in your iPod or iPhone, it starts charging and all control goes through to the AVIC system. And it’s a very familiar interface – you get most of the same menus as your iPod, album art and a big “clickwheel” (although it’s really just a big four-way button on the touchscreen that looks like a clickwheel. It’s not a complete translation of your iPod though – there’s no support for Genius or Genius mixes, which is a bit of a shame. 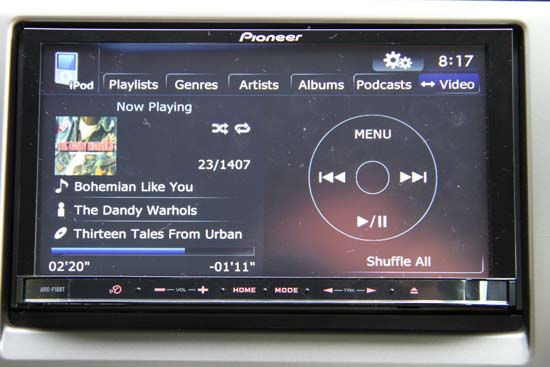 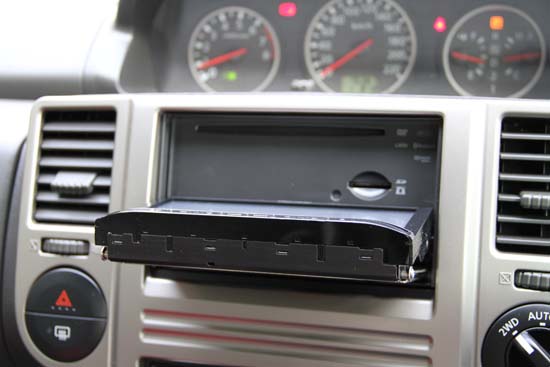 Of course, there’s also the built-in DVD player which will do the same thing, as well as play back CDs (both audio and MP3). The SD card also plays back music, and although I didn’t get to test it, the specs say it’ll play back DivX and H.264 files via either the SD or DVD slots.

There’s also the ability to play stereo Bluetooth through the system, and if your car has steering wheel audio controls, you can get them wired up to control the AVIC, although the car I was driving didn’t have them.

Being a Pioneer car, the audio playback was pretty awesome, but most of that was the speakers. In terms of controls, the touchscreen managed most of it, although there are dedicated volume and track forwards and back buttons on the bottom of the screen. The Bluetooth functionality is a godsend. My last car had a Motorola Bluetooth hands-free kit installed that used the car’s speakers, and despite being valued at a few hundred dollars, it had nothing on the AVIC’s Bluetooth. For a start, the AVIC has a screen, which lets you see details a more traditional Bluetooth system could only dream of. Once you’ve paired up your phone, you can see your signal strength and your network on the screen. But the killer is the ability to copy your contact list from the phone over to the AVIC’s 2GB of internal storage, which means you can easily call anyone on your contact list with a few presses of the touchscreen. You also get missed calls, recent calls and a shortcut to your home number easily located on the phone’s main screen. Considering the legal implications of using your phone while driving these days, this is almost worth the price of admission in itself. OK, not quite, but it’s still the best implementation of installed Bluetooth I’ve played with. 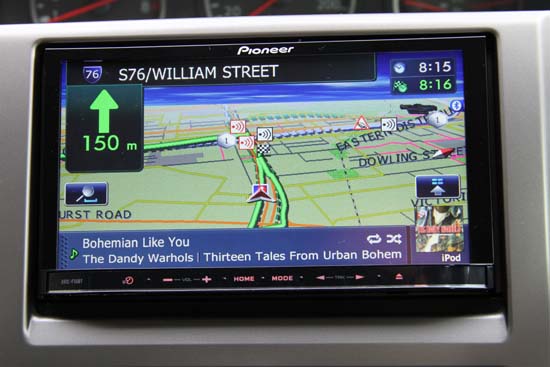 There’s a lot to be said for navigation on a seven-inch screen. It’s easy to view, easy to control and, well, that’s pretty much it. Considering I’ve long been lamenting the fact that satnavs tend to be fairly stagnant in terms of new features that are actually useful, having a device with such a big screen was quite refreshing. It uses the latest WhereIs maps, which shows off things like golf courses on the screen as you drive past them. It’s also big enough that it can display your music track information (and album artwork) on the screen at the bottom, even with the satnav running. There are a couple of other noteworthy aspects to the satnav – first off, it’s a learning device, so if you like to take a particular shortcut, it’ll start directing you that way when you next take that route.

The other big thing is a result of the device been installed – the device will actually track your position when you drive through tunnels. No beeps and messages about lost satellite reception. No confusion about underground exits. In other words, proper navigation wherever you are. And that’s awesome. It really is.

The AVIC-F10BT comes with SUNA traffic, although I have no idea where the TMC antenna is. It’s certainly not running along the bottom of your front windshield, and doesn’t need to be plugged in each time you want to use the satnav. The touchscreen interface is simple. The Home screen gives you the option of Music, Satnav or Phone. But if you press the home button again on the home screen, there’s a customisable page of shortcuts to key functions of the device. Things like navigate home or launching the FM radio. That means you’re no more than three presses from all the key functions of the device, and it doesn’t get much better than that.

There’s a dedicated button on the bottom of the unit that switches between satnav and music control. That may sound like an obvious inclusion, but it’s only when you’re using it that you realise how much sense it actually makes.

Verdict This device costs $2999, plus installation. It’s the top of the range Pioneer AVIC system though, and offers the ability to control rear screens and audio output if you have a truly kickass speaker setup in your car. It also works with a reverse camera, which can be installed as an optional extra.

But despite all that, $3K still seems pretty steep. But there are a couple of things to consider – if you’re buying a new car, you’re likely to pay that much to get a satnav option, but you’ll probably miss out on the whole Bluetooth and iPod functionality. The other thing is that Pioneer have a cheaper option, which has a smaller screen and fewer functions, but maintains the core aspects of the device (iPod, Bluetooth and satnav) selling for under a grand (plus installation). Considering top of the line satnavs cost almost a grand, that’s incredibly good value. You do need a double DIN free in your car, but if you can spare it and the cash to get it installed, I have absolutely no hesitation in recommending this system. It’s a complete solution for most of your in-car needs, and well worth the price of admission.