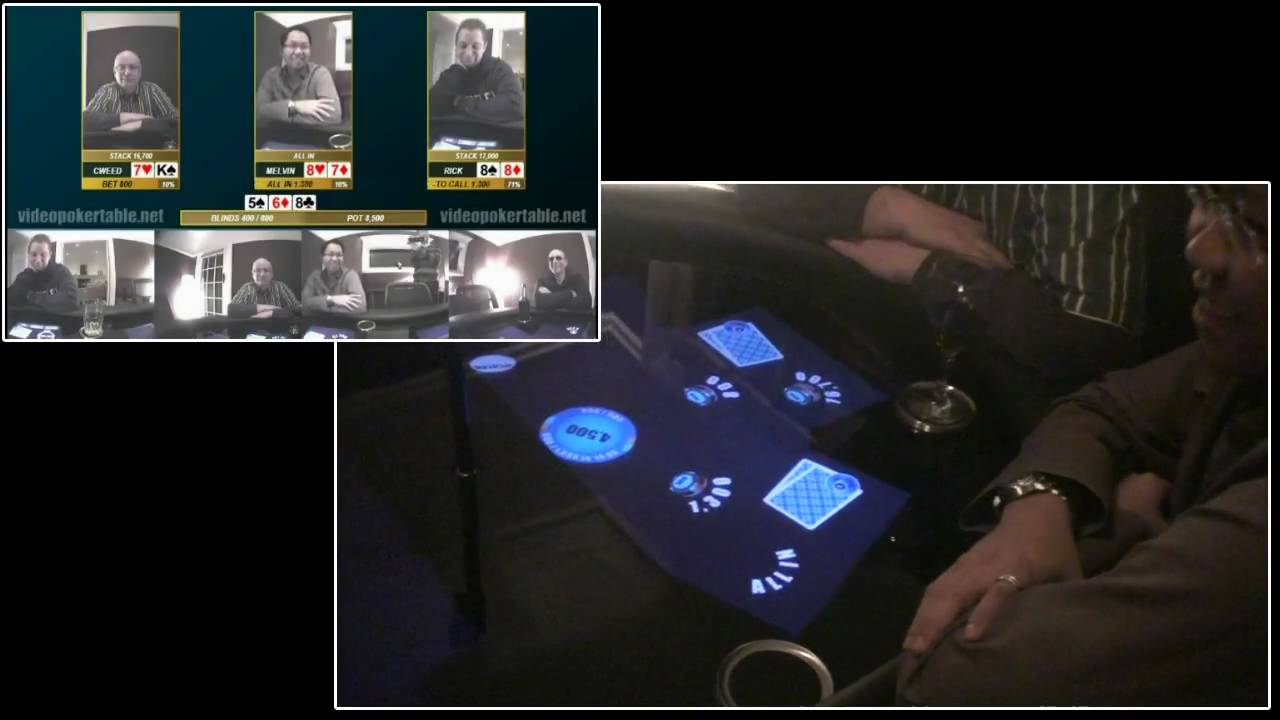 Remember that DIY RFID Poker table that Aussie geek Andrew Milner created last year? Well, turns out it wasn’t quite good enough. So he’s gone back to basics and created the Hold ‘Em-1000 Virtual Poker Table, a touchscreen enabled custom poker table that not only does away with the need for a dealer, cards and chips, but is also actually available to buy as well.

As you can see from the clip above, the interface is intuitive, the animations are fluid and the game faster. In fact, what started as a way to overcome some of the problems with the RFID table resulted in more poker actually being played. In Andrew’s own words:

“The reason I developed [the virtual table]was because of some problems with RFID I couldn’t solve – the biggest being how to get accurate chip counts for players. I did experiment with RFID-embedded gaming chips but it was impossible to get players to keep them stacked in a way that would ensure reliable counts. The virtual table does have other advantages – since there’s no manual dealer to shuffle cards, we play a lot more poker – almost double the number of hands per hour.”

The tech inside the table is impressive: it contains 3 x 32-inch LCD screens with custom software written by Andrew in C# using Microsoft’s Visual Studio 2008. The UI was created with Windows Presentation Foundation (WPF), while a seperate Windows app, also developed using C# runs on a connected network PC to stream HD video and graphics of the poker match online.

The table uses nine projected capacitance touchscreens – one for each player – to allow touchscreen control of each person’s cards.

“PCT isn’t true multitouch, due to a principle called occlusion. That’s why I had to use a separate touchscreen for each player. I also had to develop code which reads the raw data from the touchscreens and approximates the size and position of the users hand or finger. It’s a hack very similar to the way an iPhone works – it’s not true multitouch because it can really only sense 2 touchpoints reliably.”

But the touchscreen interface has been the most difficult element of the table for Andrew to get right.

“Getting the touchscreens to work just right has been the biggest challenge, correctly recognising gestures. Finding a good compromise between usability and safety (in other words, preventing ‘accidental’ folds or bets) has taken a lot of time.”

The online streaming of the poker match has also been improved by the virtual nature of the table. Rather than relying on RFID, the table now does everything over ethernet, which is faster and more reliable.

Unlike the RFID table, Andrew is actually planning on selling the Hold ’em 1000 Virtual Poker Table. Even though he only announced it on his website a few days ago, he’s already received a large number of commercial inquiries. But it won’t come cheap – you can expect to pay $20,000 plus shipping to get your hands on your own table. Sure, it’s expensive, but considering the amount of time and effort Andrew’s clearly put into creating this beast, not to mention the high-tech wizardry inside, $20K is a downright bargain.

You can get more info on the table, as well as contact Andrew about ordering one for your very own on his website. And if you’re wondering what happened to the old RFID table, rest easy knowing that it’s safe: “The RFID table is safely stored away – I think I’m going to start a poker table museum”.