Samsung caught a whole mess of bad press last year after numerous reports of its Galaxy Note 7 smartphone exploding. The company, however, apparently believes there's still a rabid fanbase demanding a defused version of its mobile time bomb. So a refurbished version of the phone is going back on shelves next month -- bearing what might be the most delusional name possible.

For Some Reason, Samsung Might Sell Refurbished Versions Of Its Exploding Phones

The Galaxy Note7 is a huge black mark for Samsung -- an exploding embarrassment that cost the company a ton of money and kicked off one of the biggest PR nightmares in recent memory. But despite the global recall, the jokes on late night TV, and the fact that the FAA and other agencies banned the phone from air travel, Samsung might sell refurbished Galaxy Note7s in the future. That's... certainly a choice!

Samsung's Battery Factory Caught On Fire Because Of Course It Did

Just when you almost forgot about what a terrible time Samsung's been having, a literal garbage fire broke out at the company's battery supplier in Tianjin, China. The cause? Discarded faulty batteries.

US Airlines Don't Have To Warn You About Explodey Galaxy Note7s

Is there anybody left who doesn't know you can't take the Galaxy Note7 on an aeroplane? The US Department of Transportation thinks not. As of Tuesday, the FAA says that airlines no longer have to make pre-boarding announcements concerning the explodey -- and banned -- nature of the device. 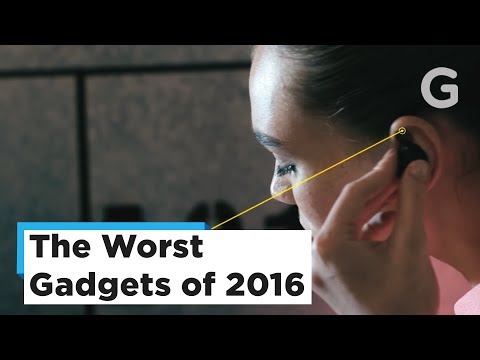 Every year, countless gadgets find their way into the Gizmodo offices. Many are flat-out terrible. As garbage year 2016 comes to a close, we look back at the worst gadgets of the year.

This week, one Virgin America flight was delayed and another was reportedly canceled after crew members discovered a Wi-Fi hotspot named "Samsung Galaxy Note 7" mid-flight. Ultimately, however, no Note 7 was found on the plane, as the network belonged to another device named to resemble the banned smartphone.

It will be impossible to look back on 2016 without shaking your head in disbelief. So as the year finally draws to a close, there's no more fitting way to celebrate the holidays than by curling up with a glass of Soylent alongside a crackling simulated fireplace full of Samsung Galaxy Note 7s spontaneously combusting.

Samsung Is About To Brick Every Galaxy Note7 In America

If you're still carrying around a Galaxy Note7, you should return it ASAP. As an extra incentive to US customers, on Friday Samsung announced that it will be issuing a software update to US Note7s that will prevent the phone from charging or working as mobile devices.

Samsung is really, really, really sorry about all of the explosions. On Monday, the Korean hardware giant issued an apology to its customers in the form of a full-page ad in The Wall Street Journal, The Washington Post and The New York Times.

Samsung New Zealand has had it with idiots who refuse to turn in their recalled, explodey Galaxy Note 7 devices. Starting on November 18, Note7 owners in New Zealand "will no longer be able to connect to any New Zealand mobile network services to make calls, use data, or send SMS messages".

Samsung Lost A Ton Of Money Due To Exploding Phones

Samsung just filed its third quarter earnings report, and the results are not looking good. The company's net profit fell 16.8 per cent following the disastrous launch and unprecedented recall of the Galaxy Note7 smartphone launch. Samsung's mobile division is reporting the lowest quarterly profit in more than six years, back when its first Galaxy phone came out. Ouch!

This iPhone Skin Transforms Your Phone Into An Exploded Note7

As if having to return the latest and greatest device from their favourite smartphone maker didn't already sting, now Apple fans can stick it to their Samsung-loyal friends with these smartphone skins that make it look like an iPhone's battery has had a severe meltdown as well.

Samsung is offering its South Korean Note7 owners a cheaper upgrade for the yet-to-be-released Galaxy S8 or Note8.

Samsung Still Doesn't Know What Made The Note7 Go Boom

After continued reports of the phones catching on fire when charged, Samsung finally put the Galaxy Note7 out of its misery two weeks ago. But 2.5 million recalled devices and $3 billion in projected losses later, the company is apparently no closer to identifying what killed its flagship smartphone.

When a Galaxy Note7 caught fire in China, its owner started filming the damage. That's to be expected. What was less expected was how Samsung reacted to news that one of its phones caught on fire.

Samsung Hit With US Class Action Lawsuit Over Note7 Debacle

Three Galaxy Note 7 owners have filed a class-action lawsuit against Samsung in New Jersey. The lawsuit comes one week after Samsung officially recalled its Note 7 smartphone and ended production worldwide.

On Saturday the federal flight ban on Samsung Galaxy Note7 phones went into effect in the United States. All four major Australian carriers have also banned the phone. We asked our readers how this was working out around the globe and from the replies we've received, it's safe to say that, so far, this sucks.

Feds Just Banned All Galaxy Note7 Devices From US Flights

The Transportation Department just banned all Samsung Galaxy Note7 smartphones from any flight in the United States. The ban goes into effect at noon on Saturday local time, though it's unclear how effective it will be at keeping the devices off of aircraft since the TSA won't be actively searching for the devices at checkpoints.

Josh Dickey, an editor at Mashable, just published a blog post about why he's keeping his Samsung Galaxy Note7. The smartphones have been exploding left and right, and Samsung is officially halting sales of the device and recalling all phones already in the wild. But Mr Dickey wants you to know that, actually, exploding phones are fine and good. And he has the Fight Club quotes to prove it.

The Galaxy Note7 nightmare is getting worse for Samsung, as the company reports that it is expected to lose $3 billion in profit this quarter because of the disastrous phone launch and subsequent recall.