You Can Now Buy Pretend Food For Your $2,900 Sony Robot Dog

There’s no denying the appeal of a robot dog. You get the companionship, the fun of playtime, and the pre-programmed loyalty without all the mess or expenses of feeding and maintenance. Unless you really want to feed your Aibo, in which case Sony will happily sell you make-believe virtual meals and treats that unlock fun “tricks” your $US2,900 ($4,255) soulless splurge can perform.

Most smart appliances can be remotely operated using an app, but for voice control, you usually need to add an intermediary like Google Assistant or Amazon’s Alexa. Sony thinks Aibo could fill that role too, in the company’s latest attempt to convince consumers to spend $US2,900 ($4,251) on its robotic dog.

Resurrected back in 2017, Sony’s robotic dog Aibo made a big splash at CES 2018, but there wasn’t much fanfare for the pup at Sony’s CES booth this year. A few weeks later, however, Sony has announced a new version of the robotic companion featuring a beagle-inspired tri-colour paint job, and some new tricks that expand the pricey toy’s capabilities.

When Aibo is standing on its hind legs, tail wagging and soft OLED-lit eyes roving, it's so dang adorable you forget it's supposed to do stuff. But after a while the initial charm of its design wears off, and you're stuck asking what the heck this robot dog even does.

Sony, Please Let Me Play With This Good Boy

First Sony killed Aibo, the little dumb robot dog. Then, like a phoenix, Aibo rose from the ashes, new and improved, with LED eyes and a soft little back. This good boy, who went on pre-order in Japan last year for 198,000 Yen, will go on sale on Thursday, January 11. In Japan. Which is not where I live.

Sony's Robotic Dog Aibo Is Back From The Dead

First released back in 1999, Sony's robotic dog Aibo was so lifelike and animated that devoted owners are still doing everything they can to keep their ageing pets alive after Sony discontinued repair service on earlier models. But 18 years later, it might finally be time for them to say goodbye now that Sony has announced a new and improved version of the robo-pup.

In March of 2014, Sony announced it would stop supporting its impressive line of AIBO robot dogs, leaving many owners heartbroken. Countless toy companies have tried to create similarly capable robot pets since AIBO's demise, but they have all been a disappointment -- until now. Despite being a Star Wars toy, Spin Master's new life-size BB-8 might just be the zero-maintenance pet you've always wanted.

Sony's Robotic Dogs Are Dying A Slow And Heartbreaking Death

Back in 1999, Sony released a robotic dog called Aibo, a canine companion that didn't crap everywhere and only ate electricity. It sold pretty well -- 150,000 units, despite the $US2,000 price tag. Some owners became remarkably attached, which makes it even more sad that Sony has stopped repairing Aibo. Slowly but surely, they're all dying.

When a decades old toy breaks down and stops working with no hope of repair, you usually just toss it or find some way to recycle the parts. But what if you're as attached to that toy as you were a pet? In Japan, people are giving Sony's robot AIBO dog actual funerals to say goodbye to their faithful, electronic companions.

Four years after the Aibo puppy was discontinued, some CAT scans and X-rays have emerged showing two of the models' inner parts. The CT scans don't appear to show any abnormalities, but then I'm no doctor. Or roboticist.

Aibo And The Days Of Hot Dog-On-Robot Action

In 1999, the world met Aibo, the $US2500 robotic dog from Sony. The following year brought quite the litter of less expensive mechanised pups. Real dogs, however, had mixed feelings about their cyber counterparts. 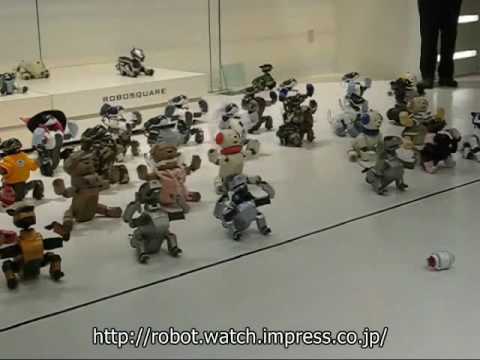 Ladies and Gentlemen, I introduce us to the real enemy. You thought your robot overlords would resemble Skynet? No, my friend. What you should be fearing is this: obedient, discontinued machine puppies.

Top Tips on Socialising Pets and Bots, Courtesy of WSJ

The Wall Street Journal has a great feature this morning about pets and household robots, such as Roombas and Pleos. Writer Andrew Lavallee has compiled all sorts of anecdotes—including useful tips on how to bed your pet in with the 'bot in your life, including protecting your Sony Aibo from cat bites (cayenne pepper and Cholula hot sauce applied to the 'bot butt, apparently). One dog owner told off the Roomba in front of his mutt, and the dog never lunged at the robot vacuum again.

Yo, suckers! You want this robot dog to guard your home? You're a nut! Mr. T only likes Big Dogs or hot dogs! HPI's little G-Dog thing is way too small, like Murdoch's stupid dog Billy. And it's some kind of kit, so you got to be putting all those fiddly parts like plastic pieces, three-axis acceleration sensor, servos and 7.2V nickel hydrogen batterys together. With no spark-welding, man! But if you're into this crazy robot stuff: I ain't gonna stop you. You're gonna have 15 x 5.3 x 7.5 inches of robot with some crazy motion processing software stuff, and it's gonna be doing robo-doggy do on your desk. What's it gonna cost? Cool it: we don't know the price. But you can get it from July, in Japan.

It looks like Kotaku's word on a new AIBO was fairly solid, because a new from Stuff talks about an AIBO PS (or AIBO PlayStation as we read that). Controlled through a PS3, the AIBO PS will appear as an avatar on the PS3 XMB (menu system). Personalities will be downloadable off PSN and...wow, it just gets better (along with the mega-sized scan):The Wi-Fi capable AIBO PS will be completely controllable through a PSP or PS3. Plus, when in security mode, the AIBO PS will be able to awaken itself when sensing sound or motion and ping your email. Your PSP could then interface with its camera and stream the signal real time. Oh, the little guy will be able to climb stairs with the best of em.

Stuff puts the probability rating at around 53%. So whether it's pure speculation or from a hot tipster, we don't know. But none of it sounds all that crazy to us.

New AIBO in the Works, Could be PS3-Compatible

According to an interview with game designer and Sony buddy Masaya Matsuura, a new AIBOesque device is in development. From his interview with Kotaku:

"The engineers behind the Aibo are doing the PS3. We are talking about making something like the new Aibo."

I ask if it will connect to the PS3. Because that's what I really want: A robotic dog for my PS3.

"I don't know. Connection is not hard. I'm sure some engineer could do that."

AIBOs never appealed to me. But with PS3 support and a killer app, the robo pet could actually be a lot of fun. You know, not quite as fun as a real dog. But still alright.