Google’s revamped Nest Camera is not only battery-powered, but the company made some changes to its features to make it much more economical when it comes to sucking up bandwidth. Google also stopped requiring a premium Nest Aware subscription to get the most out of the camera. The Nest Camera can also work outdoors and indoors, so you don’t have to think too hard about where to place it. And there’s a magnetic base that makes it easy to remove the camera when it’s time to charge. If you want an all-around dependable security camera, the Nest Camera is good. But it could be better.

At a glance, the Nest Camera seems like a mere model refresh. Folks like myself can keep using older Nest cams until Google cuts off support. (When that is, is still unclear.) Google will support new Nest device software for at least five years. But the old Nest cameras don’t have on-device facial and object recognition. They also don’t offer 24/7 live recording or access to the free tier of Nest Aware. As it stands, the new Nest Camera is the best Nest cam you can buy. The only concession you have to make is whether you want to go all in with Google. 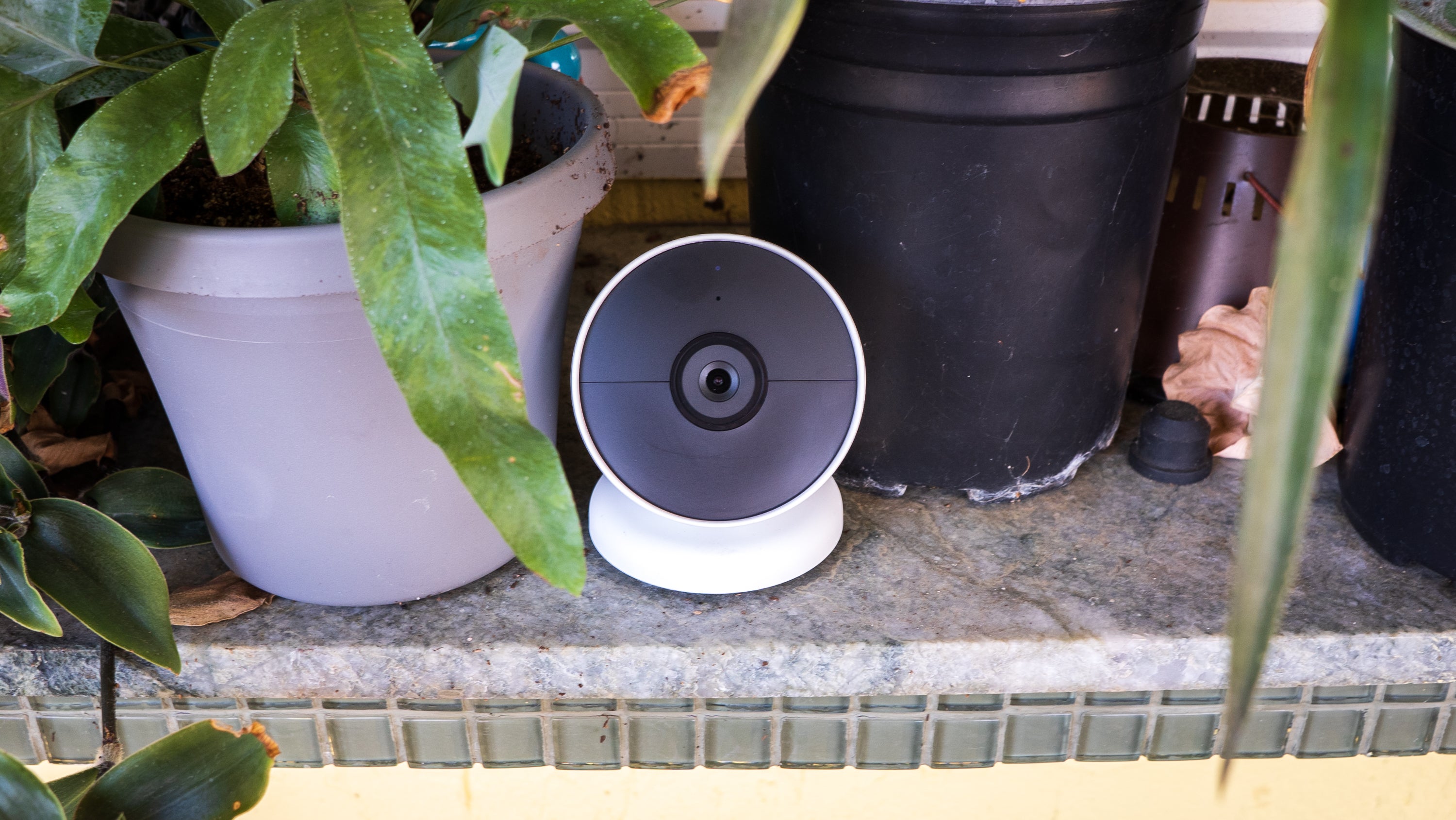 No-fuss setup, on-device facial recognition, rated for both indoor and outdoor use

Can only be used through the Google Home app, requires a sold-separately stand for use on a tabletop, magnetic mount is finicky to use

The Nest Camera ushers in a new look for Google’s security devices, and it’s much more modern and sophisticated than the dippy bird-look of the original Nest Camera Indoor. The chassis is also water- and dust-resistant, so it’s primed for being placed wherever.

The magnetic mounting system is one of the major selling points of the new battery-powered Nest Camera, though I struggled with it a bit. At one point, I tested the camera upside down and used a settings option in the Google Home app to re-orient it. But when I did that, it flipped over the motion sensor. The app warned me that I might not get the best performance when using the camera that way, so I figured out how to move it back onto the base. As is the case when dealing with magnets, it takes a bit of trial and error to figure it out, because it wants to point the camera up and outward. The magnetic base works better if it’s mounted, as it doesn’t have the requisite pivot ability to function as a stand. Google sells one for $US30 ($40), and you’ll want to grab one of those if you’re planning to use the camera solely on a tabletop or bookshelf—or wait until the company launches its indoor wired camera.

The Nest Cam can be used indoors with its magnetic mount, though it points outward.

The Nest Cam is IP54-rated for water resistance.

Right of the box, the Nest Cam looks like a ceramic mug. The bottom of the camera is a magnetic mount for the charging cable, plus a speaker for two-way communication.

Everything else about the Nest Camera is a cinch once you figure out where you want it. The magnetic cable easily attaches to the camera, though it uses a proprietary connector, and it’s much too short at a mere 1 metre in length, so you’ll have to buy an extension cable or give in to using the battery. That’s the point of this Nest Camera, anyway, but I like to keep my cameras constantly plugged in, so I tested it both ways.

Managing the Camera Through Google Home

Setup through the Google Home app is easy. I used the QR code ability to get the Nest Camera online, and it took just a few minutes since I already use Google as my day-to-day digital assistant. The Nest Camera supports both 2.4GHz and 5GHz networks, so I didn’t have to worry about connecting the device to a particular band.

One of my complaints about the latest crop of Nest cameras is that they rely solely on the Google Home app for checking in and configuration. As a long-time Nest user, and one who still has a bunch of those devices in a connected home, it’s confusing to have to shuffle between two apps when trying to figure out where a notification is coming from.

The first tap takes you to your cameras. But I’ll have to scroll down here…

Tap on it, and you get a glance at how much battery is left on the device.

In the Google Home app, you can view clips through the Priority events feature at the bottom or scroll down to the camera, tap on it, and then navigate to the History tab. Here, you’ll see a perpetual timeline of the latest events, individually highlighted by clip. You can scrub through with your finger as needed. There’s also a full history function available with an animation of the capture clip, and that’s to help you peruse the events a little faster. It’s a bit different from the Nest app’s way of listing out everything detected, and I found it a little cumbersome. What’s even more annoying: You have to tap on the clip an additional time to download it to your device.

It’s been over a week, and I’m still teaching the camera the faces of my child and her caregiver, who like to hang out in the backyard where I set up for testing. I noticed the requests decrease over time the more faces that I feed it. The camera can also detect packages, vehicles, and animals. Though it did mistake the stroller for a box dropped off a few times, and my kid for an animal prowling in the backyard, so it’s not a foolproof system.

A Camera for Indoors and Outdoors The battery-powered Nest Camera’s specs are solid for using it both outdoors and indoors. The camera records in 1080p and has a 130-degree field of view and 6x digital zoom. It’s helpful when you’re panning around, though the picture was clear enough during my testing that I hardly used it.

However, I did rely on the zoom feature at night, mainly when testing the camera outside. The Nest Camera’s night vision is good enough, but it’s not the best. (Netgear’s Arlo definitely takes the cake for its superior night vision capabilities.) Google claims it has 6 metres of visibility, but I only recognised that when testing it in the garage, which has many contrasting elements. Out in the backyard, which is a vast open field, I had no idea what was happening beyond the scope of my patio cover. The Google Home app lets you dive into the settings and choose 0 T your 0 T Cam should detect. Of course, the more you ask it to detect, the more battery it uses. (Screenshot: Florence Ion / Gizmodo)

By default, the Nest Camera is geared up to get you the best battery life. But if you’re used to having Nest cameras capturing motion and sound around the clock, you might find yourself disappointed by the number of clips made available. The Nest Camera is pretty conservative about the events it picks up, especially if nothing is moving around for it to recognise.

Unfortunately, it’s not possible to do the kind of battery rundown test I’d like to show you how long the Nest Camera will last on a charge. I had it plugged in for the first week of use in the garage and then left it on the battery as I migrated it out to the back. The camera still has 87% left after six days off the charger, and that’s with me checking in with it frequently for testing. Google says its camera can run for up to seven months before needing to be plugged in. And when the Nest Cam battery reaches 20% (about seven days left), it dials down the video quality to help keep battery life thumping.

There’s No Need to Upgrade

Let’s talk about Nest Aware, which is now an optional subscription program for the new Nest Cameras. (It’s required for the old ones.) Google now offers live viewing and three hours of event-based motion sensed video history for free, as well as one hour of on-device storage in case your network goes out. For $US6 ($8)/month or $US60 ($80)/year, you can upgrade to 30 days of event history, or $US12 ($16)/month or $US120 ($160)/year for 60 days. You’ll still get the benefits of checking in on everything remotely without paying a monthly fee.

If you already have security cameras around your home, you don’t need to replace them with Google’s latest offerings. Even if you’re still living with older Nest devices, you can hold out until Google releases its new wired cameras for $US100 ($135) later this year. The new Nest Cam is a reasonably hefty camera compared to the regular indoor one, and you might not want to deal with its bulk or buying a separate stand if you merely want to watch over a room in your home.

The other thing to consider is that buying a Nest product from Google means relying entirely on Google Assistant in your smart home. While Google has invested more in security features, and the on-device facial recognition is less creepy than sending it to the cloud, there are still privacy concerns to consider. (I detailed this more in my Nest Doorbell Cam review.) Also, neither the Nest Doorbell (battery) or the Nest Cam works with other companies’ products or assistants, so if you rely on Alexa or Siri to automate parts of your life, this probably isn’t the cam for you. More integrations are sure to come once the industry adopts Matter in the next year. The real question to ask yourself is if you’re ready to commit fully to managing home security through the Google Home app—quirks and all.