Many caves are filled with sediments containing the excrement of birds and bats. This forms phosphate-enriched deposits known as guano — essentially, piles of ancient poo.

At Con Moong Cave in northern Vietnam, we wanted to discover more about the first modern humans (Homo sapiens) to arrive in Southeast Asia. The cave was full of surprises, including a thick layer of soaking wet guano.

We designed a laboratory experiment to better understand whether waterlogged guano destroys bones, stones, charcoal and other organic remains. This has helped us interpret the material we dig out of archaeological sites and to reconstruct what those sites were like in the past. 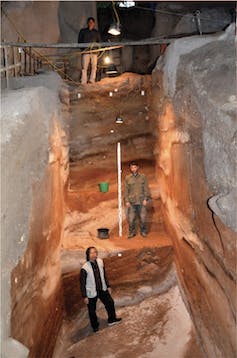 We’re not sure when people first arrived in Southeast Asia. Because of the region’s hot and humid climate, materials discarded in the landscape rapidly weather away and we are left with very little evidence of past human activity.

In Southeast Asia, caves are the best places to look for evidence of what humans were doing tens of thousands of years ago. Fragmentary remains of modern humans found in caves in Indonesia and Laos have been dated to 63,000 years or older, which is long before people settled in Europe.

Caves provided shelter to people in the past and they also slowed the destruction of the materials left behind. But caves are wet and dynamic spaces, and the sediments they contain often get moved around.

Bats are a further complication. When humans abandon a cave, bats may move in and shower everything on the cave floor with excrement.

Guano breaks down, becoming very acidic and dissolving bones, stones, ashes and clays. But guano is also loaded with phosphates that interact with dissolving materials to form new minerals. In areas where we detect these new minerals, we know any archaeological materials that were there would have been destroyed.

At Con Moong Cave, we found soaking wet guano in sediments deposited more than 50,000 years ago. Its chemical signature was unusual, because waterlogging had prevented the guano from becoming acidic.

We wanted to understand whether the guano layer had always been wet and how this might have affected the preservation of bones, stones, ashes and charcoal. So we made our own guano-filled tropical cave in the laboratory.

We began our experiment by collecting bags of poo from a cave with a large population of insectivorous bats. We also collected materials similar to what prehistoric humans left in caves, including bones, stones and charcoal.

Two sets of these materials were then placed in 24 takeaway containers. We then piled on top a thick layer of wet guano and put the containers in an oven set at 30℃ to simulate tropical conditions. Now we had 24 hot, wet and smelly analogues of what we thought Con Moong Cave was like tens of thousands of years ago.

Over the course of two years, we excavated the contents of one container every month and recorded the changes that had taken place. Two years is a lot shorter than the many millennia archaeological materials have been buried in Con Moong Cave.

But the processes observed in our experimental samples give an indication of what happens in the early stages of burial, with the changes becoming more pronounced over time. So our findings can help predict what these features might look like in archaeological deposits.

Surprisingly, the guano did not become acidic, but the buried materials were nonetheless rapidly altered and destroyed. To understand why this was happening, we studied the structure of the guano at very small scales (known as its “micromorphology”).

In our experiment, only half of each container was excavated, with the remaining half soaked in fibreglass to stabilise and solidify the contents. When the fibreglass had set hard, we cut a sliver — just 30 thousandths of a millimetre thick — through all of the buried materials.

This “thin-section” sample allowed us to examine the materials in detail, using geological light microscopes, to understand how they had changed chemically and been replaced by different kinds of phosphate minerals.

The chemical changes were extremely complex, so we analysed the thin-section samples in a scanning electron microscope to get a better idea of the processes driving these changes.

The images we collected suggested bacteria from the guano were heavily involved, with possible outlines of bacterial cells observed in the newly formed minerals.

The minerals detected in our experimental samples are very similar to those we found in the ancient sediment samples from Con Moong Cave. The fact such chemicals can form in very wet guano layers makes them useful markers for identifying periods when archaeological caves were very wet in the past. This provides an important source of environmental information in tropical regions.

These minerals can also help us understand the distribution of archaeological materials at a site. Where we find them, we know the extreme chemical environment would likely have destroyed any ancient bones or ashes.

By providing clues to the missing parts of the archaeological record, these minerals can help us better understand the limitations on reconstructions of the human past based solely on those materials that have survived.

Improving our knowledge of when humans were, or were not, living in the cave is important for understanding when humans first arrived in Southeast Asia, how long they occupied various sites, and what types of activities they engaged in.

Our experiment demonstrates the chemical cocktail formed in waterlogged guano would have destroyed the traces of any human activity in the oldest deposits at Con Moong Cave. To establish the initial time of arrival of people in this region will require further digging in other caves.

Our bat poo experiment might seem like mad science. But it is helping to fill gaps in the story of the peopling of Southeast Asia over the last tens of thousands of years.