The release of the Game & Watch: Super Mario Bros. seems to confirm that Nintendo has no plans to revive or revisit the Game Boy as it did with its NES and SNES throwback consoles. It’s time to move on because there are other companies happy to indulge your Game Boy nostalgia. With a matching Famicom-inspired design, Anbernic’s new R280V delivers the retro experience that many gamers feel Nintendo’s new Game & Watch revival should have.

Note: A sample of the Anbernic Retro Game 280V was provided to Gizmodo by online retailer KeepRetro.

For the past couple of years Anbernic has been churning out better and better Linux-powered handhelds that leverage software emulation to play retro games from classic consoles like the Atari 2600, Game Boy, and Sega Genesis, to even more powerful 3D systems like the original PlayStation and the N64. Our current recommendation for retro gaming on-the-go is the Anbernic RG350P featuring a landscape design (like the original Game Boy Advance) and a pair of analogue joysticks that are crucial if you intend to play 3D games that include camera control. It’s a lovely piece of hardware, but a 3.5-inch screen and those joysticks means the RG350P isn’t particularly pocket-friendly. Enter the new RG280V. 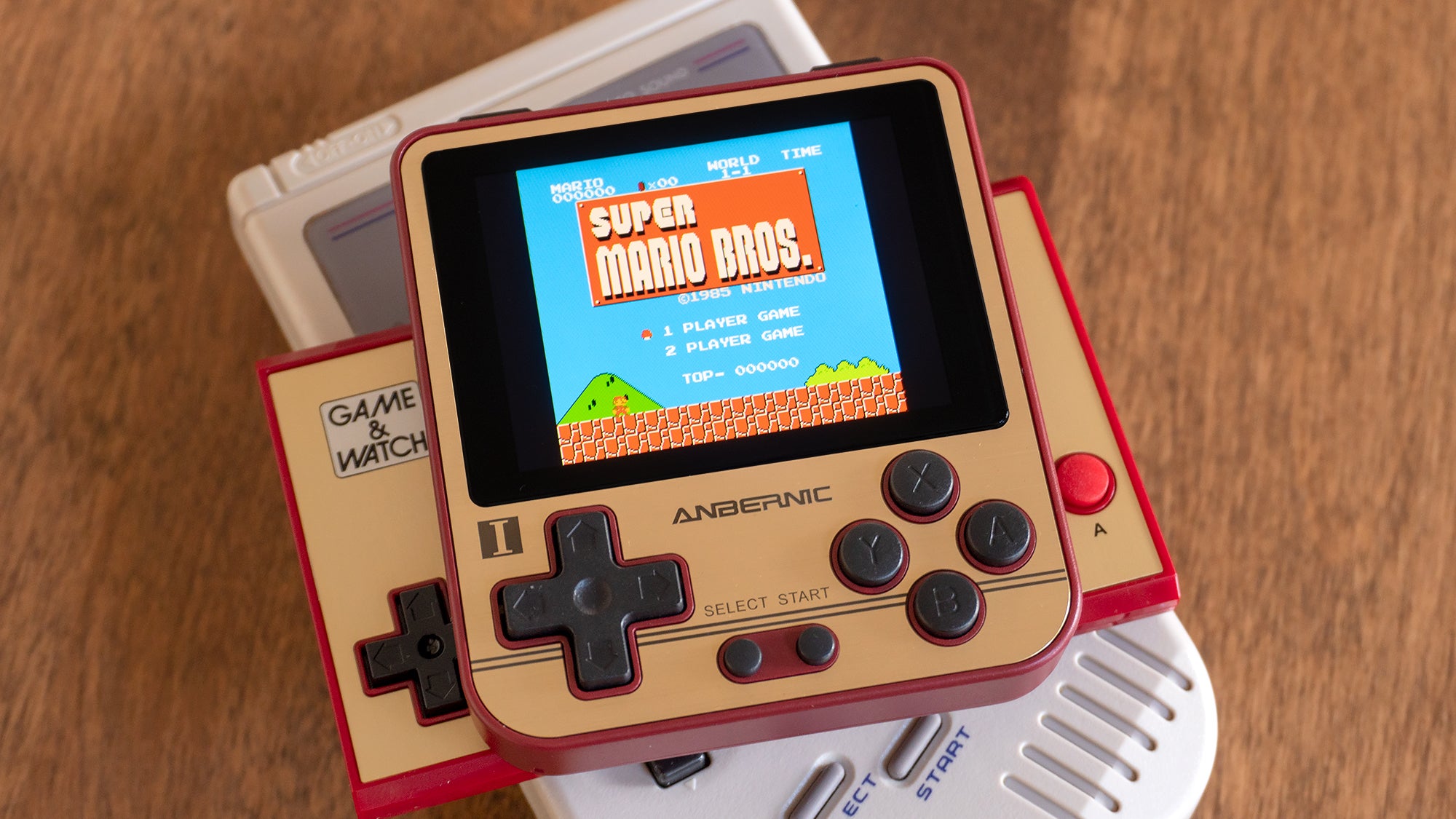 More compact and pocketable than Anbernic's other retro handhelds.

Lack of analogue sticks means you'll be mostly using it to play retro games from the 16-bit era and earlier, and you still need to source your own game files.

If you took an original Game Boy, the Game Boy Advance, and Nintendo’s new Game & Watch and mashed them all together to create a handheld highlighting all their best features, you’d end up with a console like the new Anbernic RG280V.

Internally it shares almost all of the same guts as the RG350P, including a dual-core 1.0GHz JZ4770 processor, 512MB of RAM, and a slightly smaller 2,100 mAh battery that promises up to seven hours of battery life assuming you steer clear of playing more CPU-intensive games. That means, like the RG350P, the new R280V can emulate consoles like the PlayStation and N64, but you’re probably going to want to make the PS1 your cut-off in terms of what games you’ll actually try to play on this thing. The RG280V (right) is much smaller than the RG350P (left) but runs with the same processor and RAM so it can technically play any game the larger handheld can. The RG280V (top) is much thicker than Nintendo’s Game & Watch: If you trimmed away all the original Game Boy’s fat you’d end up with the RG280V.

The RG280V is much smaller than the RG350P and features a vertical design (hence the “V” in the name) like the Game Boy and the later folding versions of the Game Boy Advance. It’s a little on the chunky side — much thicker than Nintendo’s new Game & Watch — but at the same time it’s much easier to slip into a pocket. However, the improvement in portability comes at the cost of losing the RG350P’s analogue joysticks. As with previous Anbernic handhelds, the controls on the RG280V feel great, but its smaller footprint means the RG280V lacks analogue control sticks, so playing 3D games requiring camera control is all but impossible. The buttons and D-pad on the RG280V (right) are larger than those on the new Game & Watch: The RG280V features two pairs of shoulder buttons in an excellent tiered layout, and in addition to USB-C charging, there’s also a headphone jack on top.

The RG280V features just a four-way directional pad, a set of four action buttons, and dedicated buttons for Start and Select. As with previous Anbernic handhelds all the controls feel fantastic with just enough click and resistance, and they’re larger than the buttons Nintendo included on the new Game & Watch which is a definite plus. But it means that while you can limp along playing some PlayStation titles, you’ll just be frustrated trying to tackle any N64 games. The RG280V is better suited to games from the 16-bit era and older. Gamers with larger hands might have a struggle reaching the RG280V’s shoulder buttons with their index fingers. (Photo: Andrew Liszewski/Gizmodo)

Is the RG280V too small? It depends on the size of your hands, and the games you’re playing. The two sets of tiered shoulder buttons on top are needed for playing GBA, SNES, and Genesis games, and if you’ve got larger hands like yours truly, it can be a little tricky to bend your index fingers down to reach them. I do find handhelds like the larger RG350P more comfortable to hold for longer play sessions, but it doesn’t mean that those of us with beefy paws necessarily need to stick to simpler games from the pre-shoulder buttons era on the RG280V. Comfort is often just one of the necessary sacrifices for smaller handhelds — remember the excellent Game Boy Micro? My fingers still hurt. The RG280V’s screen is beautiful, with a laminated design that makes it bright and crisp with excellent viewing angles. At 2.8-inches it’s smaller than the RG350P’s 3.5-inch screen, but also features a small resolution bump so actually looks better. (Photo: Andrew Liszewski/Gizmodo)

The RG280V’s smaller footprint also means the RG350P’s 3.5-inch screen has been reduced to 2.8-inches here, but a minor resolution bump to 480×320 pixels means it looks a little better, despite being smaller. It also features the same IPS laminated display as the RG350P which sits flush with the screen cover. As a result the RG280V’s screen looks fantastic and crisp with excellent viewing angles, and I would actually choose it over the screen Nintendo used on its new Game & Watch. ROM files can be loaded using a microSD card loaded in a slot, while the RG280V’s software lives on another microSD protected with a sticker that is challenging to cleanly remove. As a result, software and firmware updates aren’t easy. (Photo: Andrew Liszewski/Gizmodo)

The RG280V (and any retro gaming device that relies on ROM files) does require some basic competency when it comes to getting games onto the device. The RG280V is easier than most, letting you simply fill a microSD card with ROM files that then pops into a slot on the side of the handheld. It doesn’t come with any games, however, which brings us to the point in the review where I remind you that playing games using ROM files, not the original cartridges or discs, is a legal grey area which also complicates sourcing these types of files. There’s no sugar-coating it: the RG280V’s software is ugly and often frustrating to use. But it’s functional, and the handheld delivers excellent performance for 16-bit games and older. (Photo: Andrew Liszewski/Gizmodo)

You’ll also need to brace yourself for the RG280V’s Linux-based operating system which lacks the polish and user-friendliness of the front-ends on most mainstream gaming systems. More simply put: OpenDingux is ugly, kind of a pain to navigate, often confusing, and usually a challenge to perform firmware and software upgrades. You don’t need to be a hacker to figure it out, but you will need the patience of a saint. If you’re wondering why you can get a handheld gaming system with a beautiful screen that can play thousands of games for less than $US100 ($136): this is why.

If you’re looking for an all-around excellent handheld emulator, the RG350P is still my top recommendation and a solid piece of hardware that still shines. If portability is your priority, or you’re just looking for a modern take on the Game Boy, or you’re disappointed that Nintendo is now selling a $70 handheld that only plays Super Mario Bros. and a stick figure juggling game, the RG280V is the better way to go. Most of my retro gaming happens with the consoles of my youth like the Game Boy and SNES, and the RG280V plays all of those games wonderfully. The hardware and capabilities of the handheld more than make up for the lack of polish in the operating system, and assuming you’re not singularly obsessed with Super Mario Bros. you’re better off spending a few extra bucks on the RG280V over the new Game & Watch.