consumer techcookingthermoworksthermoworks signalsthermoworks signals review
Photo: John Biggs
To sign up for our daily newsletter covering the latest news, features and reviews, head HERE. For a running feed of all our stories, follow us on Twitter HERE. Or you can bookmark the Gizmodo Australia homepage to visit whenever you need a news fix.

As a fan of multiple meats, I’m always checking hamburgers, steaks, and other grilled gobbets with a portable thermometer to test for doneness. Until the ThermoWorks Signals, I haven’t been able to find a product that acts as sort of a meat tender, something that will monitor multiple foods at once. It’s not a new device but this particular version is updated with Wi-Fi and Bluetooth and after preparing a few meals with it I can say it is a solid upgrade to handheld, pen-style thermometers popular with at-home grillers.

The device itself consists of a four-panel LCD screen that can stick to metal surfaces with magnets on the back of the display. Theoretically, you could stick it to your grill, but you shouldn’t (more on that in a second). Still, the magnets mean it’s easy to stick on your fridge or even the side of an oven if you’re using it inside.

You plug in the multiple probes – either a thinner internal probe or the thicker air probe that measures the ambient temperature – and connect the device to your phone via Bluetooth or Wi-Fi. The included app gives you instant access to each temperature and you can set alarms and timers both in the Signals itself or on your phone. 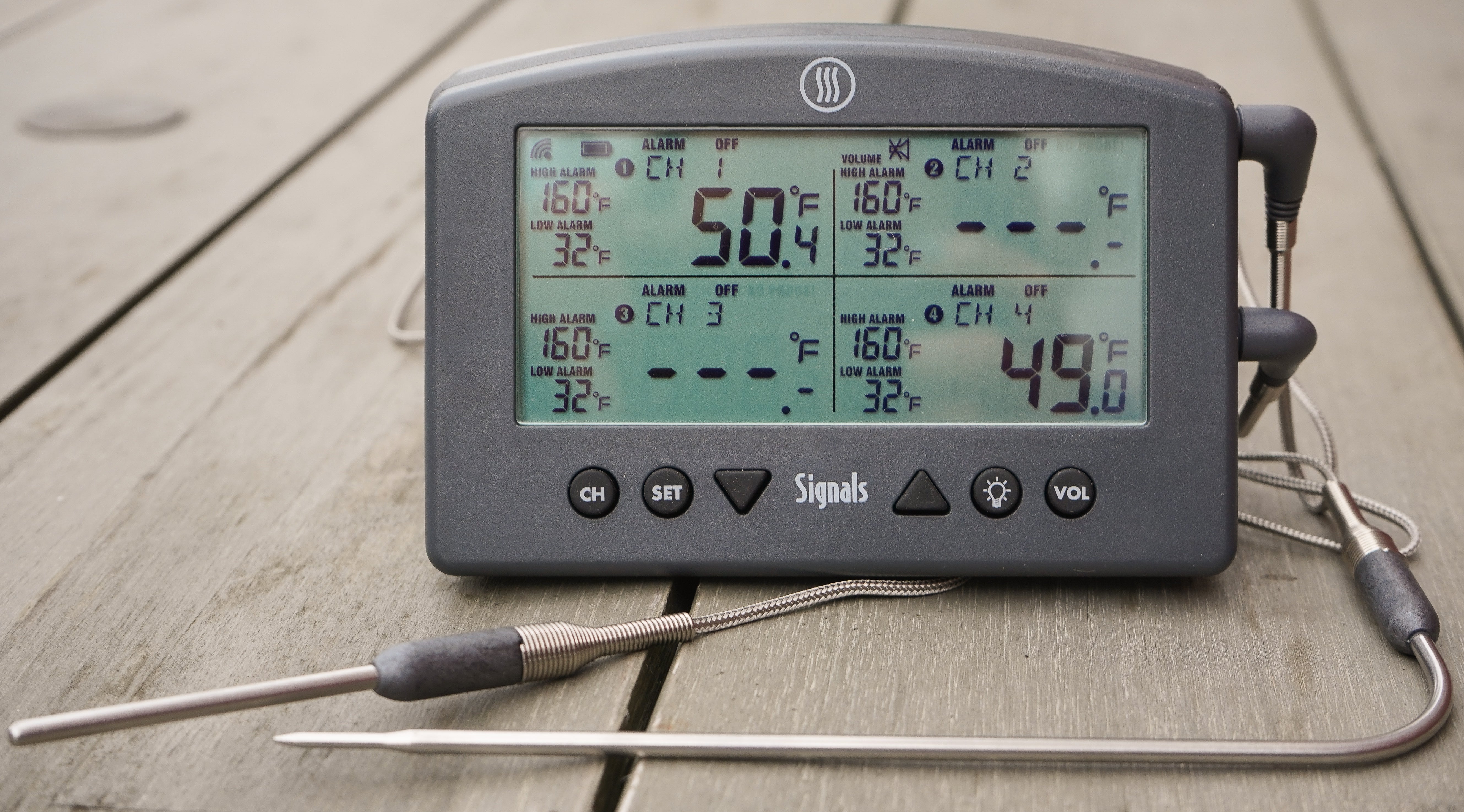 A simple solution for monitoring your meat remotely.

The system might be too simple for professional cooks.

ThermoWorks designed the system to be a portable monitoring station that lets you keep an eye on everything on your cook at once. The main unit is waterproof although you will probably want to bring it in after your cooks to avoid potential sun damage. It supports temperatures between 0 and 50 degrees Celsius which means it can survive outside in the summer, but not in the winter, and you shouldn’t attach it directly to your grill hood. That said, you can easily wind the probes into the grill area for transmitting back to the unit and leave it nearby.

And speaking of the probes, while mine came with an ambient air probe, and an internal probe, ThermoWorks makes a decent variety of probes. Most are rated to handle temperatures as high as 370 degrees Celsius. But if a probe does fail from heat damage or a bad crink of one too many times in the oven or on the grill, you can replace it for about $25. ThermWorks even sells extension cables for the probes themselves. In case you need more than length.

I tried the Signals by grilling a few burgers and a steak at about 180 degrees Celsius. My Traeger grill has recently stopped transmitting via Wi-Fi, which is what made this device particularly interesting for me. But I can imagine it’s even better if you’re working with a simpler gas or charcoal grill without high-end tech features. In this season of feasting, adding this to your outdoor kitchen makes a lot of sense. (Though would it be so bad to use in your indoor kitchen too?)

The device’s range was quite solid, even through the brick walls of our Brooklyn home. Typically the biggest issue with many of these devices is the deterioration of signal through walls and across lawns. But I have a pretty robust Wi-Fi signal outside and it worked well. If you have the same then this should work for you too. It should be noted it only works with up to 802.11b/g/n on the 2.4 GHz band, however. If your Wi-Fi set up is 5 GHz only you’ll be stuck on Bluetooth 4.2 for app support.

The ambient air probe, which is useful when smoking or baking.

The app lets you see each probe individually. For really long smokes you’ll want to plan a little as the ThermoWorks Signal lasts 16 hours on a charge. That’s a bummer when you compare it to ThermoWorks pens, which can last through years of use. But the Signal is also rechargeable via USB-C and on a really, REALLY, long smoke you could plug it in if need be.

And that’s part of the beauty of a thermometer like the Signals. It’s flexible and can be used for a wide variety of uses. The is great for smoking and grilling outside, but it also works as an oven monitor, allowing you to keep an eye on your turkey, sides, and desserts while sipping your nog. Given the importance of ensuring everything is at the right temperature, it’s a great little kitchen gadget for this time of feasting.