Everyone loves to see a big, burly truck fail at accomplishing a basic task that even a tiny city car could handle, which is why this video of a six-wheeled Ford F-250 struggling to climb a slight incline is so satisfying.


Sometimes enormous heavy-duty trucks look tough and sometimes their size makes them appear clumsy, like when they go off-road or — apparently — when they have six wheels and try to climb a small grade:

According to video aggregator ViralHog, who posted this clip onto YouTube, this all went down in West Warwick, Rhode Island, which seems about right based on the hilarious commentator’s accent. “Just going about my day and I meet this guy who starts telling me how awesome his 6×6 is,” the video’s description reads, “then attempted to make it up a 40ft hill and fails.”

Really, the narrator is one of two main reasons why I’m even sharing this video (the second being that I want to look at this truck’s 6×6 system — I’ll get to that in a sec), because the sheer joy he gets out of this burly truck spinning its wheels is a joy we should all strive to achieve at least once in our lives. His hearty laugh — “Ahhhh hahahaha, that thing’s a 6×6 fa’ nothin’!” — is just too good.

Interestingly, someone named Andrew Wladyka seems to have posted a photo of this truck onto the Oppositetalk Facebook group just hours before the video — which appears to have originally been posted to Facebook by someone named Pat Phelps — went viral.

Wladyka says the truck “rolled into work” just as he was leaving, going on to say that the machine is a true 6×6, acknowledging another commenter’s assertion that it was built by the (now-defunct) company USA 6×6.

I did a bit of digging, and found the video above, which shows how the 6×6 system works on what is almost certainly the exact same truck struggling to make it up the slight incline in Rhode Island.

There has been a bit of discussion in the Facebook video thread about why the truck had so much trouble considering it has so many tires with which to gain grip. Some claim that the reason why only the back wheels spun had to do with both rear axles sharing a differential (and thus, the axle with the least grip got the power).

But based on what I’m seeing above, that doesn’t appear to be the case, though admittedly I am not entirely certain how the 6×6 system works. This truck, like other 6×6 conversions (You can read more about how to build a cheap 6×6 here — I even drew a diagram), basically just involves mating the rear driveshaft — which normally goes from the back of the truck’s transfer case to the rear axle — to the back of another transfer case (in this case, what looks like a bulletproof gear-driven NP205, which, incidentally, does not contain a differential). 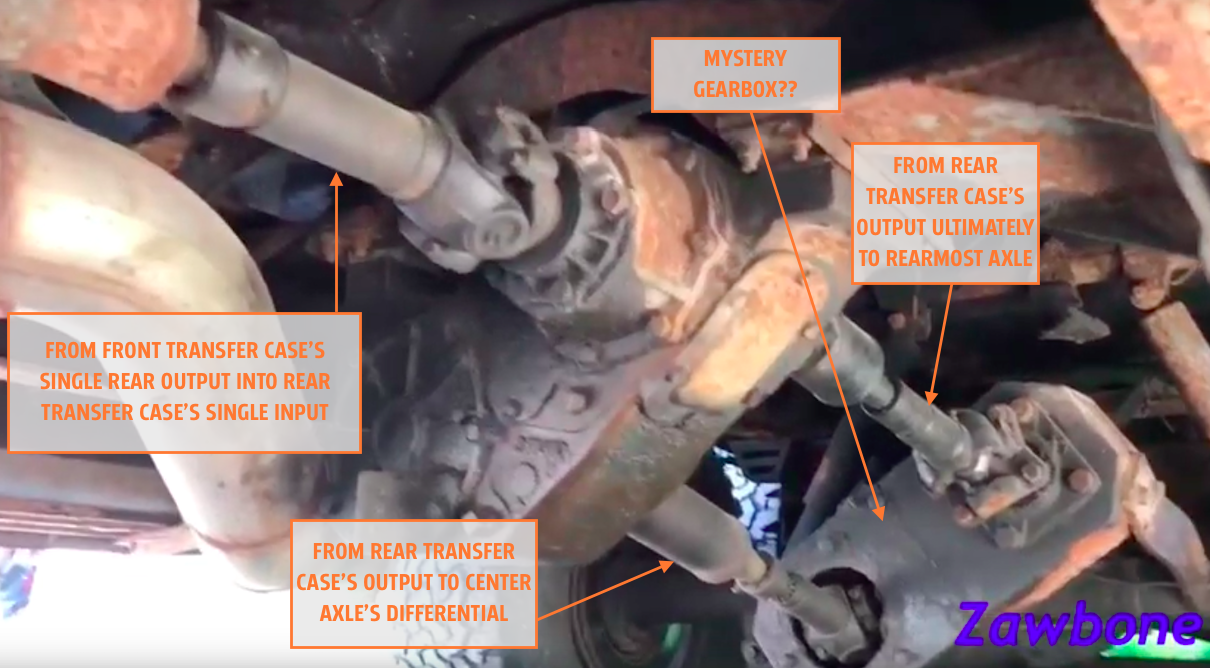 What’s interesting about this truck is that, instead of just running a driveshaft or two over the middle axle to attach to the rear diff, there’s actually what appears to be a gearbox fastened to the middle axle. I say “appears to be,” because — based on pictures of USA 6×6’s hardware and on someone named Gonzo Dave’s blog chronicling the build of a 6×6 Jeep CJ-6 — it’s common in 6×6 builds to bolt a box with a helical 1:1 gear set onto the middle axle.

But such gearboxes are there so that only a single input shaft from the main transfer case can be used to power both the rear axles. In other words, such a gearbox bolted to the middle axle eliminates the need for a second transfer case. Gonzo Dave describes why he used such a gearbox, saying otherwise he’d have had to use a differential with its own rear output:

The builder of the F-250 from the fail video likely had the same problem as Gonzo Dave in that sending power to the rear axle requires some some sort of “over-the-shoulder” solution, but since the heavy-duty truck has a second transfer case with two driveshafts coming off its back end (and the CJ-6 only has one transfer case), I’m convinced that the box fastened to the rear axle isn’t a gearbox at all, but instead really just a big bracket to help facilitate sending power up and over the second axle, since getting a driveshaft over a moving axle would be tricky.

The solution is to just have the shaft going to the rear diff attached and moving along with the centre axle.

So basically, it looks like one driveshaft from the back of the truck’s second transfer case goes directly into the middle axle’s differential, and the other goes into this rectangular “bracket,” which moves with the axle, and which I suppose has some sort of bearing and a yoke on the back side for a driveshaft to the rear diff.

Take a peek at the underbody clip and pay attention to where the driveshaft on this “other side (which normally corresponds to a transmission input)” goes. Yep, to the rear axle — the very one that lit up those tires while trying to climb the hill.