Above: An underwater hunter from Indonesia holds his breath so he can stalk and spear a fish. Via BBC's Human Planet.

Illusionist and stunt performer Harry Houdini was famously capable of holding his breath for over three minutes. But today, competitive breath-hold divers can squeeze ten, fifteen, even twenty minutes out of a single lungful of air. How do these divers do it — and how can you train to hold your breath for longer?

This article was originally published in March 2017.

“My best static breath hold is pretty crap,” says surfer Mark Healey in an article on breath-holding from the September 2011 issue of Surfer Magazine. “I think it’s about 5:30.” 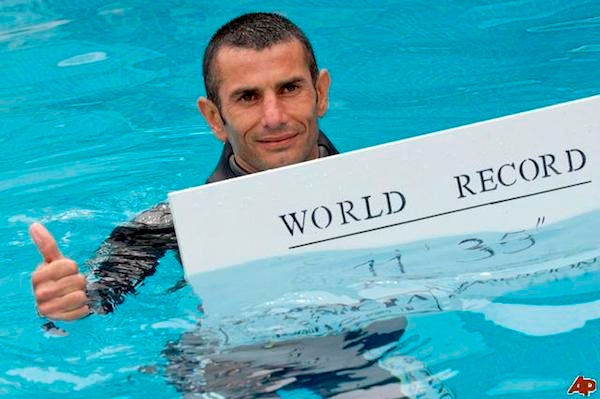 If that sounds like a long time to you, that’s because it is, and Healey is being modest (some would say irresponsibly so). But to the world’s foremost practitioners of “static apnea” — a competitive discipline in the sport of freediving in which a person holds his or her breath underwater, without moving, for as long as possible — five minutes is small change. In 2001, renowned freediver Martin Štěpánek held his breath for a then-unprecedented 8 minutes 6 seconds. His record stood for nearly three years, until June of 2004, when freediver Tom Sietas bested it by 41 seconds with a time of 8:47. The record has since been broken eight times (five of them by Sietas, himself), but the title currently belongs to French freediver Stéphane Mifsud. In 2009, Mifsud spent a lung-searing 11 minutes 35 seconds below water on a single gulp of air.

Static apnea is the only discipline in freediving measured in units of time, but it is arguably the purest manifestation of the sport. It is also, inarguably, the skill most essential to the practice of the seven other sea- and pool-based disciplines officially recognised by the International Association for Development of Apnea, or “AIDA,” the global sanctioning body for competitive breath-holding events.

These events include “No Limit” (the “absolute depth” discipline, whereby the freediver descends with the help of a ballast weight and ascends via a method of her choice) and “Dynamic Without Fins” (whereby the freediver travels in a horizontal position under water attempting to cover the greatest possible distance in the absence of propulsive aids), and are measured in units of depth and distance. Other events allow for the use of fins, ropes, weights, sleds and even specialised vests with inflatable compartments, but every single one boils down to the athlete’s ability to make the most that he or she can out of a single breath’s worth of oxygen. 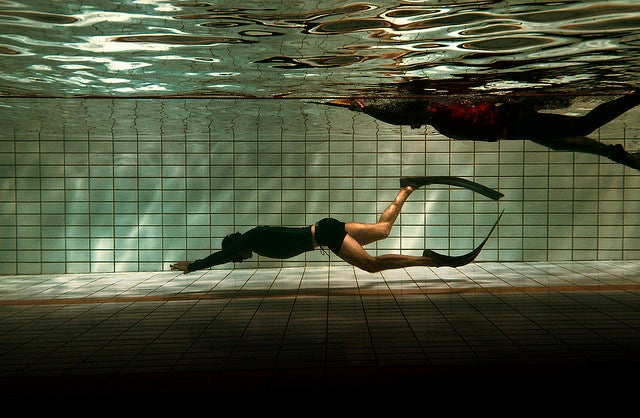 Above: A freediver with his safety diver, competing in the AIDA category of “Dynamic With Fins” (DYN) at the 2nd Great Camberwell Breath Hold Freediving Competition held in London on 31 May 2009 | Photo and Caption Credit: Jayhem via flickr

Freedivers subject themselves to years of training to achieve such breath-defying feats. In the process, they actually modify their biology.

The oxygen you breathe is transferred to your blood and delivered to the various tissues of your body, where it is converted into energy. The waste product of this process is CO2, which is carried back to the lungs and released from the body upon exhalation. When you hold your breath, O2 is still converted to CO2, but the latter has nowhere to go. It recirculates in your veins, acidifying your blood and signalling your body to breathe, first with a burning sensation in your lungs, and eventually in the form of strong, painful spasms of your diaphragm.

The blood of a seasoned free diver has been shown to acidify more slowly than those of us who spend our lives inhaling and exhaling reflexively. Activation of the sympathetic nervous system causes their peripheral blood vessels to contract soon after they stop breathing, thereby conserving oxygen-rich blood by redirecting it from the extremities to the vital organs, especially the brain and heart. Many freedivers also practice meditation to literally calm their hearts. Reducing the body’s metabolic rate attenuates the conversion of oxygen to CO2). Meditation has a calming effect on the mind, as well; much of the battle, when holding one’s breath, is mental. To know, logically, that your body can persist on the oxygen already available to it. To ignore outright the mind and body’s compulsion to breathe.

There are other tricks to holding one’s breath that rely less on extended training and more on increasing what divers refer to as one’s “total gas storage.” Take “buccal pumping,” for instance, which was developed by spear-fishing breath-holders long ago and introduced to sport diving by U.S. Navy diver Robert Croft in the 1960s.

Also known as “lung packing,” buccal packing involves taking the deepest breath possible, then using oral and pharyngeal muscles, along with the glottis, to hold the throat shut while shunting air, cheekfulls at a time, from the mouth down into the lungs. It’s been said that by repeating this pumping movement up to 50 times, a diver can increase his total lung capacity by as much as three litres.

A 2003 study that measured the lung capacity of a breath-hold diver gives a more conservative figure, noting an increase following buccal pumping from 9.28 litres to 11.02. Lung capacity can also vary considerably from person-to-person: The average lung capacity is 4 litres for women and six for men, though acclaimed free diver Herbert Nitsch has a reported lung capacity of 14 litres.

Then there’s hyperventilating, which divers often do to flush their systems of CO2 and pre-load their bodies, instead, with unconverted oxygen. The most extreme version of this technique involves breathing nothing but pure O2 for as much as 30 minutes before submerging one’s head beneath the water. The air we breathe is only about 21% oxygen (the rest is mostly nitrogen), which means that a breath held on atmospheric air will last significantly shorter than one held on pure O2.

This technique was how magician David Blaine managed to break the world-record for breath-holding in 2008, with a time of 17 minutes and 4 seconds, and how Stig Severinsen blew that time out of the water in 2012, with a mind-blowing performance of 22 minutes. This was later broken by Aleix Segura Vendrell in February 2016, who managed to achieve 24 minutes and 3.45 seconds.

It bears mentioning that “static apnea,” as discussed earlier, is defined by AIDA, and so is distinguished from the Guinness World Record for “breath holding underwater,” which allows for the use of pure oxygen in preparation.

All of these techniques and training methods carry with them a significant risk to one’s safety. Exceeding the limits of oxygen deprivation can lead to loss of consciousness or even to death, while extended exposure to pure oxygen carries its own set of risks. Hyperventilating can cause you to pass out, and there is evidence that suggests buccal-pumping can actually cause your lungs to rupture. It is for these reasons that freedivers rarely practice breath-holding unsupervised, or in or around even shallow water; after all: when you’re blacked out, it doesn’t matter how deep the water is. 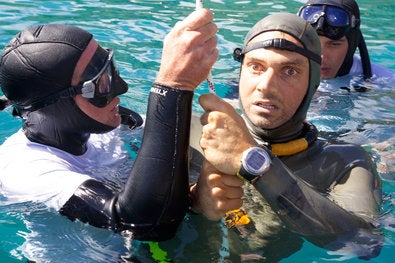 At Left: Mevoli upon surfacing from a record attempt. He died a short time later. Photo Credit: Lia Hyun-Joo Barrett for The New York Times

The jury is still out on whether repeated bouts of extended apnea is hazardous to your brain in the long term, but it should still give budding breath-holders pause to know that death is not unknown to freediving. The sport’s last major loss occurred last November, when 32-year-old Nicholas Mevoli died while attempting a record-setting free-dive of 71.93m. He was underwater for 3 minutes and 38 seconds, and while he returned to the surface by his own power, he lost conscious shortly after surfacing and was pronounced dead soon thereafter.

Studies that predict future performance in competitive diving claim that there’s still a ways to go before the physiological limits of the sport are met, noting that current training methods and strategies suggest that duration can be prolonged still further. Divers, themselves, suggest the ultimate limit, unaided by oxygen, will be 15-minutes. AIDA’s official statement claimed that Mevoli’s death was the first in more than 20 years of its competitions.

Given the pursuit of that 15-minute barrier, and other, more extreme diving performances, it’s hard to believe that his will be the last.