Come on in, the water's...quite clearly haunted. (Image: Neflix)

Even The Haunting of Bly Manor’s Episode Titles Are Spooky as...

Say High To The Stoner Buds In These 10 Sci-Fi, Horror, And Fantasy Movies

In honour of the holy 4/20 day we present this round-up of our favourite stoner characters from sci-fi, fantasy, and horror movies.


After the success of Marlon Wayans, one of the movieâ€™s co-writers), who elevates the classic â€œdoomed stoner in a horror movieâ€ comic-relief character to excellent new heights.

We all remember the â€œWassup!â€ phone call, but Shorty steals every scene heâ€™s in, including his death, which comes after Ghostface accidentally (or not?) annihilates all his stoner buddies during a rap battle. When Shortyâ€™s shot by the main characterâ€™s evil boyfriend, his pierced lungs emit enough smoke to invite a contact high. (He also gets to pop up in the credits for a quick tutorial on shoplifting snacks that clowns Screamâ€™s famous â€œhow to survive a scary movieâ€ speech.)


While we never actually see SoCal besties Bill and Ted getting highâ€”they were kind of too busy time travelling, trying not to flunk history, and saving the world to take smoke breaksâ€”theyâ€™re very clearly cut from the cloth of legendary stoner characters who came before them, like Fast Times at Ridgemont Highâ€™s Jeff Spicoli. Other tells: their drifting attention spans, their fondness for convenience stores, and the fact that they named their heavy-metal band â€œWyld Stallyns.â€ Duuuude.

This sixth entry in the Nightmare on Elm Street series takes us to a surreal future where nearly every kid in Springwood has fallen victim to Freddy Krueger, save a single survivor whoâ€™s unwittingly used by the dream demon to bring him fresh prey. This includes the pony-tailed Spencer (Breckin Meyer, four years before his Clueless breakout), whoâ€™s fond of weed and video games, much to the disgust of his yuppie father. When Spencer and his crew foolishly pick a certain house on Elm Street as a crash pad, the affable burnout dozes off with a joint in hand.

Naturally, Freddy is all too delighted to engineer a demise that incorporates all of Spencerâ€™s vices, starting with a riff on the old â€œthis is your brain on drugsâ€ PSA starring O.G. Nightmare star Johnny Depp, going into a â€œtrippyâ€ animated sequence that seems to confuse pot with LSD for a hot minute, and finally inserting Spencer and his abusive father into a video game with Freddy behind the controls. Though Spencerâ€™s friends try to wake him from the violent nightmare, heâ€™s too high to be revived…and soon, itâ€™s game over.


By the time Bill Freeburgâ€™s big scene arrives in Freddy vs. Jason, the stakes are sky-high…and so is he. The sidekick characterâ€”whoâ€™s already treated us to his particular takes on both Freddy (â€œWhat kind of a pussy comes after you in your dreams, anyway?â€) and Jason (â€œDude, that goalie was pissed about something!â€)â€”decides to take a â€œj-breakâ€ at an unfortunately crucial moment, just as he and his friends have realised theyâ€™re being hunted by killers that can target them while awake and asleep.

When Freeburg (whose name sounds so much like â€œFreebirdâ€ it canâ€™t be a coincidence) nods off, a Freddy-caterpillar waddles into the room toting a hookah, blows smoke in his face, then possesses him, making him destroy the supply of drugs thatâ€™ll save his friends from having nightmaresâ€”and goading him to inject Jason with tranquilizers. Jasonâ€™s response it to slice him in half. Harsh. 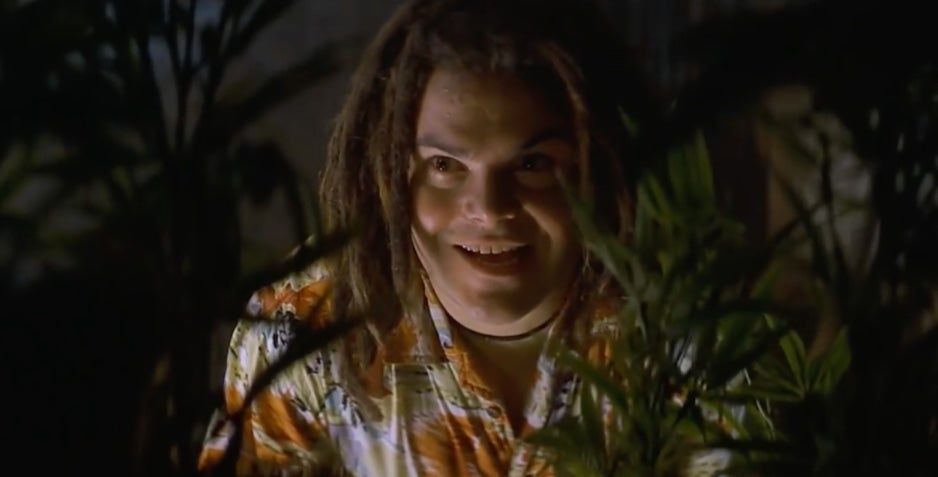 Jack Black broke out in High Fidelity not long after he appeared in I Still Know What You Did Last Summer. (Image: Columbia Pictures)

6) Titus, I Still Know What You Did Last Summer

Right away, that goofy title preps you to expect the ridiculous in this 1998 sequel; though it insists on couching its bloodbath in a tone thatâ€™s meant to be mostly serious, there are a few notable exceptions. When hook-handed maniac survivor Julie (Jennifer Love Hewitt) and her college friends win a tropical vacation, one of the first people they meet at the resort is the dreadlocked Titus, played by an uncredited Jack Black, who seems to be an employee of some vague distinction. What we know for sure is that he has plenty of party supplies: â€œAre you looking for some bud? I got some bat guano, I got the cream jeans…anything you guys need, Titus got!â€

Though the murderer is ostensibly chasing after Julie and her friends for revenge purposes, Titusâ€”whose greatest crime is being incredibly cheesy, with a side of cultural appropriationâ€”also makes the kill list, meeting a gory end while heâ€™s just settled in among his marijuana plants for a relaxing bong rip. His last words are â€œItâ€™s all good! Noooo!â€

5) Marty, The Cabin in the Woods

Drew Goddard and Joss Whedonâ€™s 2012 meta-horror comedy calls out all the genre tropes (and then turns them inside out), so of course it must contain a â€œstonerâ€ character. Enter Marty (Fran Kranz), who both fits the stereotype and completely subverts itâ€”even though heâ€™s totally baked, heâ€™s still level-headed enough to point out that reading a Latin incantation from a spooky old diary is a very bad idea. Heâ€™s also the first to catch on that all is not what it seems at the cabin. And somehowâ€”with a little help from whatever heâ€™s been smoking, which has helped immunize him against â€œpheromone mistsâ€ and the likeâ€”he also survives all the chaos alongside the Final Girl, burning one out with her as the world crumbles around them.


The Leprechaun movies are known for two things. One, that the first film starred a then-unknown Jennifer Aniston, who was cast alongside veteran actor Warwick Davis. And then, for its two â€œhoodâ€-set sequels, the fifth and sixth films in the series.

The gold-obsessed, pint-sized monster takes a break from killing to get high in both films, in scenes that have become the stuff of stoner legend. Who could forget music mogul Mack Daddy (Ice-T) teaching the Leprechaun that â€œa friend with weed is a friend indeedâ€? That made such an impression that the Leprechaun leveled up from a joint to a â€œleprebongâ€ in the next instalment.

3) Gandalf, Lord of the Rings movies

Duh…Gandalf was always the coolest wizard.

This meta-comedy is about a group of famous friends (and frenemies) playing exaggerated versions of themselves as the apocalypse overtakes Los Angeles. Weed isnâ€™t the only drug that gets consumed over the course of the movie, but it is the most lovingly celebrated, as â€œSethâ€ and â€œJayâ€ kick off their weekend hangout by getting high as hell and never really coming down, and quarantine cabin fever (hmm) inspires the whole group to create a DIY sequel to Rogen and James Francoâ€™s stoner comedy Pineapple Express.

As we eventually learn, being an enthusiastic pothead wonâ€™t prevent you from escaping Earthâ€™s hellscape and ascending into heavenâ€”in fact, as Rogen demonstrates, you can even light your joint on your angelic halo. 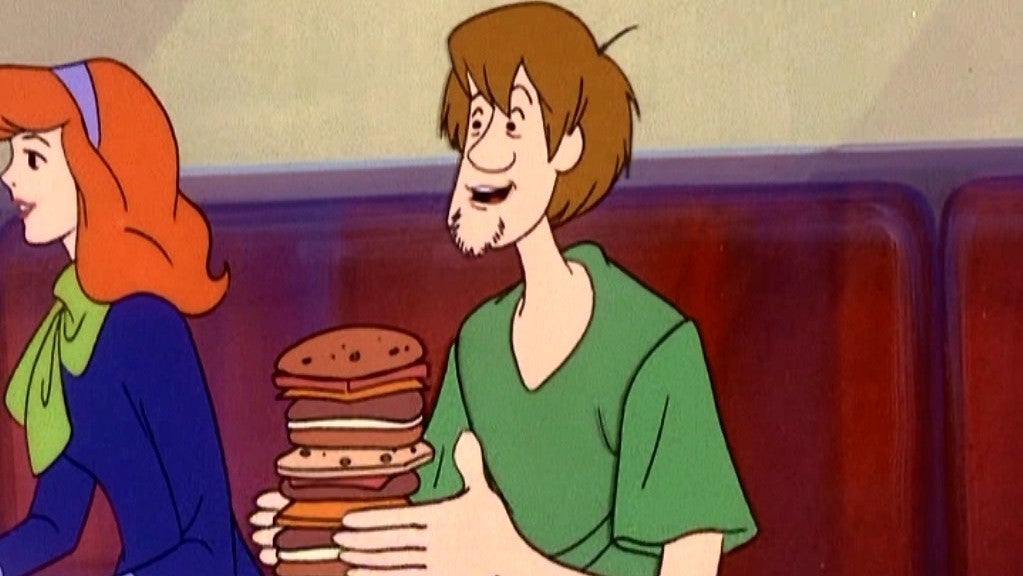 Shaggy settles in for a snack in a vintage episode of Scooby-Doo, Where Are You? (Image: Hanna-Barbera Productions)


Fans of Scooby-Doo pegged Shaggy for a stoner long before the 2002 live-action movie featured a character named â€œMary Janeâ€ for him to crush on. His late-1960s origins explain his beatnik aesthetic (the same way they explain, say, Daphneâ€™s stylishly mod outfits, the flower-power paint job on the Mystery Machine), and his fondness for dropping â€œlikeâ€ into his speech patterns.

Over the years the coding on his character just kind of morphed into â€œstonerâ€ rather than the outdated â€œhippie.â€ Though much like Bill and Ted, classic Shaggy is never actually seen smoking weed, the subtext sometimes shouts so loudâ€”all those damn Scooby Snacks!â€”you have to wonder if even the little kids who were the cartoonâ€™s intended audience mightâ€™ve picked up on it.