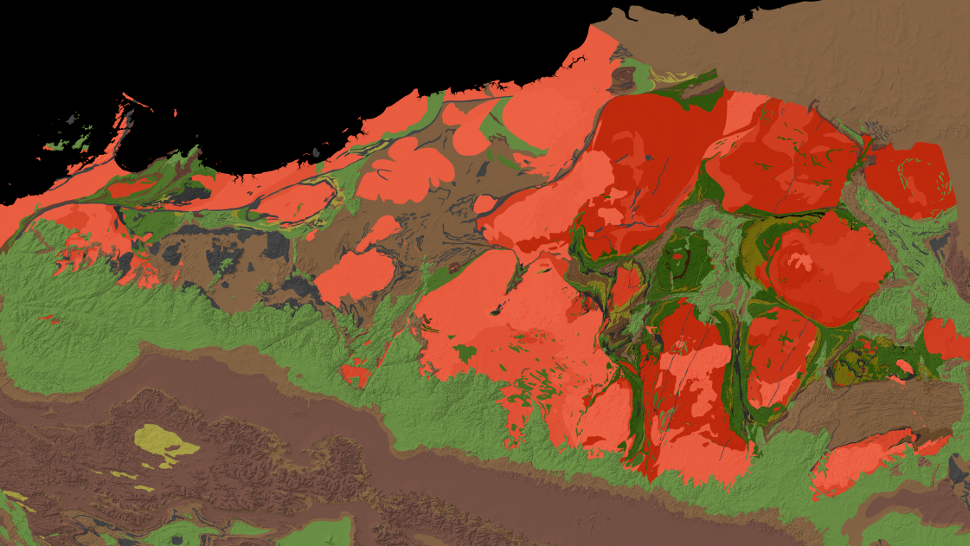 Without plate tectonics, our planet wouldn’t have continents, mountains, and possibly even life itself. New evidence suggests this geological process began at least 3.2 billion years ago, a surprisingly early origin.

Geologists debate exactly when our planet’s tectonic plates began to shift. Estimates vary wildly, ranging from 4 billion to 1 billion years ago, with general agreement that it began around 2.8 billion years ago.

New research published today in Science Advances suggests plates deep beneath the surface were moving as early as 3.2 billion years ago. Ancient rocks from Australia were found to bear magnetic signatures that could be correlated with lateral movements during the Archean eon (4 billion to 2.5 billion years ago).

“Basically, this is one piece of geological evidence to extend the record of plate tectonics on Earth farther back in Earth history,” said Alec Brenner, a co-author of the study and a geologist from Harvard University’s Paleomagnetics Lab, in a press release. “Based on the evidence we found, it looks like plate tectonics is a much more likely process to have occurred on the early Earth and that argues for an Earth that looks a lot more similar to today’s than a lot of people think.”

Plate tectonics are a critical feature of our planet, birthing and shaping our continents and forging land formations like mountain ranges. Importantly, plate tectonics churned rocks deep below the surface, thrusting them upward and exposing them to the atmosphere. This in turn led to key chemical reactions that, over achingly long timescales, contributed to the stabilisation of the Earth’s atmosphere, which eventually created the habitable conditions we know and love.

A geologic map of the Pilbara Craton in Western Australia, showing rocks between 2.5 to 3.5 billion years old. Areas in green show basaltic rock dated to 3.2 billion years ago. For scale, the entire image is over 420 kilometres wide. (Image: Alec Brenner, Harvard University. Map data from the Geological Survey of Western Australia.)

For the new study, Brenner and his colleagues visited western Australia, where they sampled rocks from Pilbara Craton—an expanse of ancient, stable crust measuring over 420 kilometres long. Some rocks in Pilbara Craton are 3.5 billion years old, representing some of the oldest crusts on Earth.

The team took 235 core samples in 2017 from a segment known as the Honeyeater Basalt. The remarkable thing about these volcanic rocks is that they’re magnetically oriented, meaning they’ve retained a record of Earth’s magnetic field as it existed when the rocks cooled and solidified during the Archean.

In the lab, these magnetic signatures, in conjunction with the known ages of the basalt, were used to infer movement of the rocks over the course of millions of years. The researchers were able to show that the rocks were on the move between 3.35 billion and 3.18 billion years ago and that they shifted in a horizontal direction at a pace of around 2.5 centimetres each year, a “velocity comparable with those of modern plates,” as the authors wrote in their paper.

Previous techniques to detect the onset of plate tectonics used methods such as measuring the positions of rocks over time and identifying chemical signatures in rocks consistent with movement. The new paper applies a paleomagnetic approach instead, establishing an early date for plate tectonics on Earth, around 1.3 billion years after the formation of our planet. What’s more, the new paper bolsters the claim that alterations to Earth’s early crust were on account of these slow and steady movements.

Stephan Sobolev, a professor of geodynamics at the University of Potsdam, said the new measurements “look convincing.” He told Gizmodo that he’s grateful for the new data about Archean Earth, particularly the data pertaining to our planet’s early paleomagnetic history, saying, “in this respect that is great work.” But he doesn’t believe the researchers have confirmed the presence of modern plate tectonics as we observe them today.

“This is the first indication of a large-scale… displacement of crust on Earth more than 3.2 billion years ago,” Sobolev, who wasn’t involved in the new research, wrote in an email to Gizmodo. “Such displacement is an indication of a kind of plate tectonics (but not necessarily the modern global type of plate tectonics) and large-scale subduction,” when plates move both sideways and downward.

It’s possible, said Sobolev, that the authors detected a special “regional type” of plate tectonics, which may have existed at different places on Earth at the time and was potentially caused by mantle plumes or meteoric impacts, as per a recent Nature paper Sobolev co-authored.

“But any type of plate tectonics requires large-scale subduction, so for me this work provides new evidence of a large-scale subduction on Earth already more than 3.1 billion years ago,” Sobolev said, adding that it “would be great if similar data were collected” at other cratons dating back to the same time period.

Another important caveat is a phenomenon known as True Polar Wander—something the researchers weren’t able to rule out as a cause for the observed displacement. True Polar Wander describes the re-orientation of a planet with respect to its axis of rotation. This can happen on account of plate tectonics, but other factors can cause Earth’s surface to shift, such as supervolcanic activity, the melting of massive ice sheets, or anything else that can alter the distribution of the planet’s mass and therefore the way it spins along its axis.

“Typical True Polar Wander estimates for the last hundred million years on Earth generate faster motions than their 2.5 centimetres per year, but we do not know how this worked during the Archean,” said Sobolev.

Accordingly, the authors said True Polar Wander might explain their data, but plate tectonics is a better fit given the observed time intervals.

Looking ahead, the researchers would like to study more samples from Pilbara Craton and other ancient rock deposits.