How What We Do In The Shadows Season 2 Builds Deeper, Creepier Vampire Worlds


“He is stuck in a home where people treat him like shit,” Harvey Guillén gestured mildly to gathered press last year near the set. His character, Guillermo de La Cruz, is a familiar, aspiring vampire, and something very different, according to a jarring plot reveal in the season one finale.

The gregariously kind actor—who also had a recurring role on Syfy’s The Magicians—treated our little press pool to Mexican hot chocolate and, hours of interviews later, doughnuts from Toronto’s local Greek bakery. He spoke cheerfully about the constant abuse of his character, “Misery loves company, I guess, because the vampires are so snappy and so mean to him, but he keeps going back to that place…The vampires are so selfish that they don’t realise what’s going on. I get home covered in blood and they’re like, where have you been?”

Kayvan Novak plays Nandor the Relentless, who for 10 years has been dispensing most of the abuse towards his familiar Guillermo. The actor would later posture, “Nandor can’t help but be a bastard to him, you know. But he still forgives him. [Guillermo] is kind of enabling this, you know, very bullying behaviour.”

But season two of What We Do in The Shadows brings many changes to the supernatural Staten Island universe. The world widens, new creatures crawl through, and characters, particularly Guillermo and the dangerously dull energy vampire Colin Robinson (Mark Proksch) grow beyond their roles as the two habitually shunned housemates of vampire manor, as their relationship with the bloodsuckers progresses. There’s action, too. “I jumped out of the window last week,” Guillén announced, happily, hinting at Buffy the Vampire Slayer antics and joking about potential window manufacturer endorsements.

“There’s a handful of funny scenes…where I get to do physical comedy, which I love to do and I rarely get to do because I always play a schlub,” Proksch beamed quietly, a pale and pleasant man, sitting politely on set surrounded by creaky fake walls so magical, I’ve promised not to describe them here. Matt Berry (who plays Laszlo), a mysterious and visibly uncomfortable presence in the far less magical break room earlier that day, was not quite as excited about all the stunts. “Going up a 50-foot side of a building to look through a window? I’d rather not do that again,” he grunted to laughter. 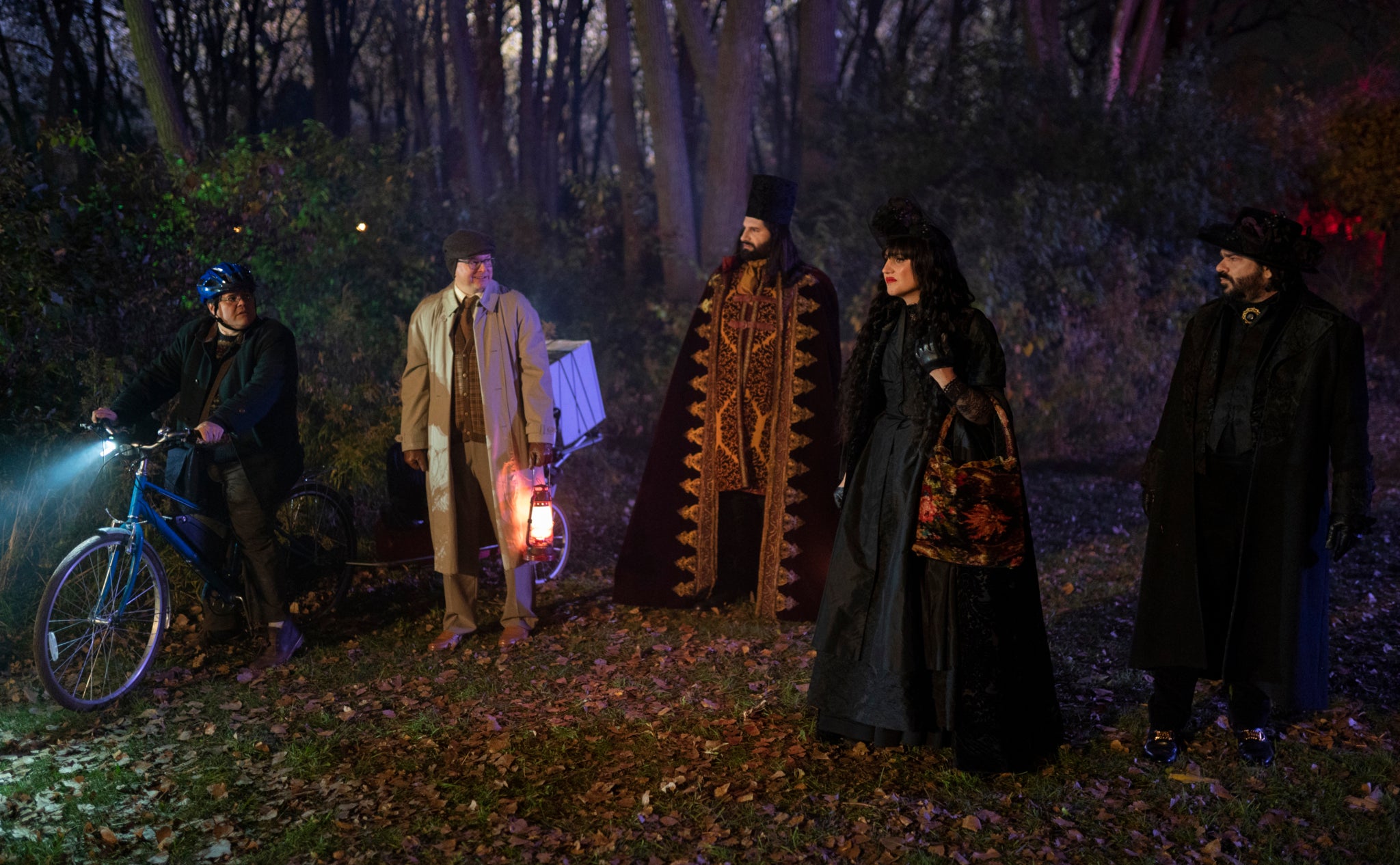 There’s a good reason for that, as stunt coordinator Tig Fong later explained—the rig that enables all that flying. “It’s quite uncomfortable. Stunt people are just used to it. We just know it’s part of the deal,” Fong said. “There are some times when a director may not even be thinking about it. They’ll stop a shot and talk to the actor while they’re hanging there.”

It takes a lot to make a vampire fly. And Fond explained, “the vampires are constantly flying. They’re flying just to get around. They’re flying when they argue and so on…except that they never fly the same way in the exact same spot. Each time that they had to fly, it was another bespoke rig, and then there, of course, there’s the times that we are travelling and we go to locations. We can’t drill holes in the floor, the ceilings are a normal height and so on. And so then it becomes another challenge.”

Then there are the costumes, some of which are Lycra, adjustable, and easily snapped on and off, but some are quite heavy and cumbersome to give them historical weight. Our first interview of the day was with costume designer Amanda Neale, as we were shuttled between racks and mannequins in vampire-esque versions of attire from every decade and century, sourced from local vintage stores and built meticulously from scratch.

“The vampires have taken elements of the various decades they’ve lived in and they’ve held onto what they want to hold onto and they’ve forgotten what they need to. It’s like real life, really,” Nealen mused. As Proksch later said, Nealen “will introduce pieces into my wardrobe that are kind of ‘30s, and ‘40s, and ‘50s that [Colin] kind of has held on to.”

The tapestry around a very boring office man can vary ever so subtly, but the standouts of the bunch were the ‘70s costumes, the creatures of the Saturday Night Fever, the velvety reds and blacks phased out by beachy tans and corduroy orange-browns. Very specific orange-browns, in fact—“a perfect quintessential mustard turmeric,” Neale demonstrated. Transplanting ‘70s-era vampires into Staten Island of the ‘90s exposes a very vampire mentality surrounding their human death. As executive producer and writer Paul Simms explained, they “never progressed beyond” that time when they became vampires.

Stuck in somewhat of a loop are Laszlo and his partner, Nadja (Natasia Demetriou), with their echoing costumes. As Neal said, “with relationships, people tend to morph into one another” and this “cohesive couple” did so with matching palettes and similar fabrics.

What’s more impressive is that the show has particular limitations. Specifically, it’s shot on a vampire schedule.

That particular relationship is due for some updates as well. I wasn’t told whether or not Nadja’s eternal (and eternally doomed) crush Gregor (Jake McDorman) would return to liven it up a bit, but creator/executive producer/writer/director Jemaine Clement would hint at developments. One thing I’ve always liked about these vampires was that relationship complexity, but also their queerness. This is where things got somewhat dissonant in terms of definitions across my interviews, giving me complicated feelings. Executive producer/writer Paul Simms would brag that he got an annual survey from GLAAD inquiring how many characters on the show are LGBTQ, and he answered, “all of them.” As in, “all of our characters are completely pansexual.” Executive producer/writer Stefani Robinson added, “They’re very open and fluid.”

Clement later would slip that these identities may have originally been formed in a joke format, as when Nadja and Lazlo both recalled their passionate affairs with the ancient, demon-like vampire the Baron (Doug Jones) and it happened to land so well. Berry summarized it simply: “Somebody comes in and we all fancy them.” I preferred that explanation to a possible joke origin story. 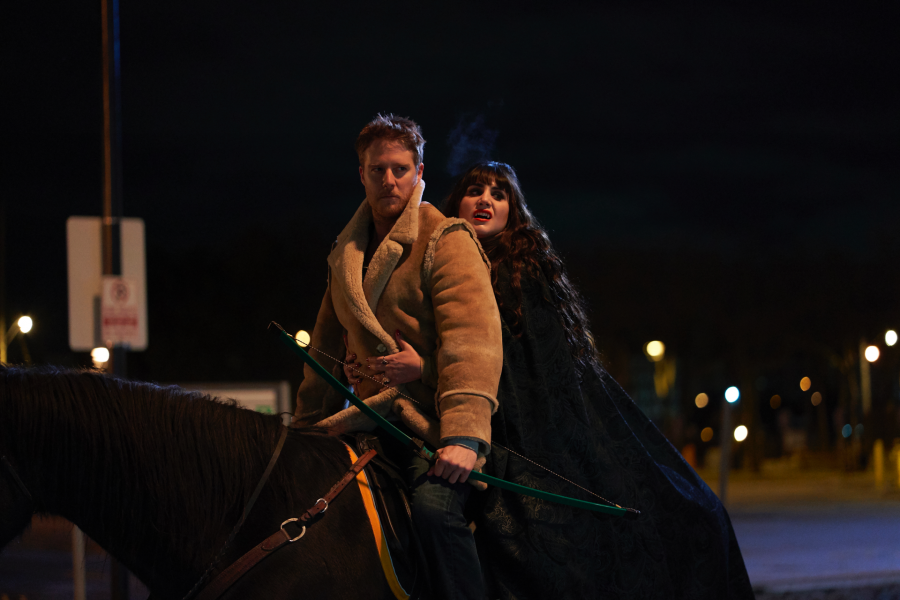 Gregor and Nadja after stealing a horse in season one. (Photo: Russ Martin/FX)

Who will arrive in season two? A whole host of new creatures, each more intricately creepy than before, “expanding the supernatural world of the Staten Island area,” as Simms said, even within one type of supernatural creature.

“In the past, we’d had a little augmentation of the brow, a little augmentation of the ears,” said Paul Jones, prosthetics makeup department head. “Now we get to see a lot more of a world, a lot more species within the vampire world. Just making teeth doesn’t make you a vampire entirely. We’ve added full faces and really gone to town on their heads. So it’s been a lot more glue this season than it was last season.” Glue, but also animatronics and puppetry. And all of that at breakneck speed. “Last season, I was getting a week or so for the four episodes. Now I’m getting like two or three days.”

What’s more impressive is that the show has particular limitations. Specifically, it’s shot on a vampire schedule, forcing the entire crew and cast to live nocturnally for most of the production period. Before a confrontation scene between Nadja and Nandor would be filmed indoors, we got to tour the empty exterior set—a tiny, ghostly mansion, surrounded by clumps of cotton snow and plaster, plastic moss-covered vulva statues, the building’s top cropped off somewhat to allow for a CGI component. Indoors, the dusty, musty hallways and rooms of the set overstuffed with overtly occult ephemera and yellowing paintings of Nandor, Lazlo, and Nadja likenesses through the centuries were, as is customary, about three-fourths to two-thirds of life-size, forcing us to sidestep around each other, the shelves, the pelts, and the upholstery comedically, going “wow, it’s all so tiny.” 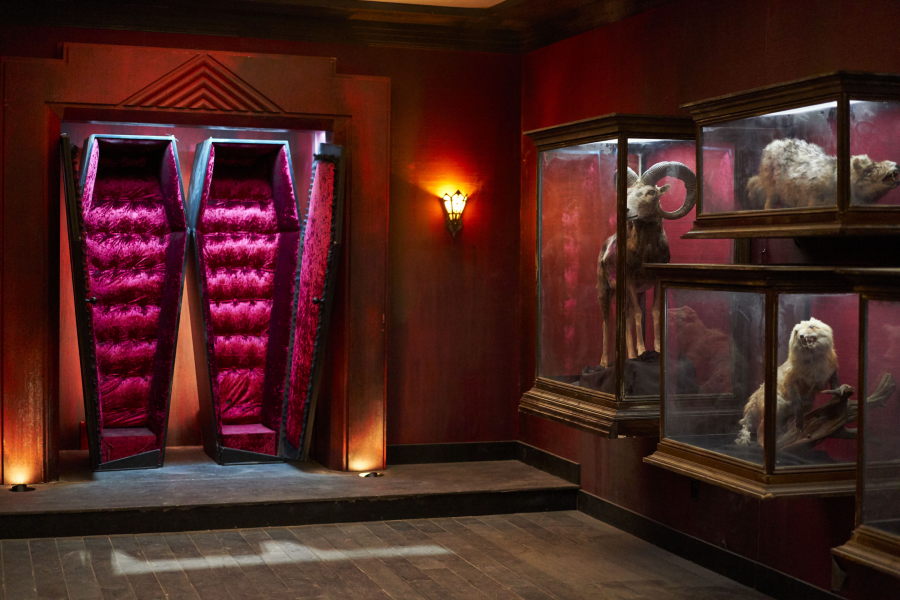 A glimpse of Nadja and Laszlo’s bedroom. (Photo: FX)

Later when we would watch a scene being filmed on monitors—Nadja stalking Nandor through that tiny hallway—it looked normal size with the appropriate lens, as expected, but I was nonetheless impressed with the choreography involved in Nandor, Nadja, and Lazlo pummelling down the short-long hallway while Nadja screamed creative insults at Nandor, swapping out one gruesome threat for another on every take.

Speaking of the script, Novak explained, “We don’t go off and do whole improvised scenes, but within the structure of the script we kind of, you know, say it in our own way although it’s so well written. I just want to say the words really. I’m not going, ‘Oh, I can make that better.’ I’m like, ‘Oh my God, I hope I can make this as good as it looks on the page.’”

The feuds continue, relationships transform, the characters evolve, but mostly, the vampires endure. There’s something about a relatable monster, Clement postured on comic book heroes and villains. “You know, you see some superhero movies and you just feel like the superhero is too powerful. There’s never any jeopardy.”

Vampires, instead, offer something more… human? They are, after all, powerless at least half the time. “They’re kind of a perfectly balanced villain in that they have all these powers and all these weaknesses,” Clement added, “So it’s really fun to watch them.”

You’ll get to watch more of the vampiric fun when What We Do in the Shadows season two premieres on FX on April 16. The new season will screen on Foxtel Go in Australia.