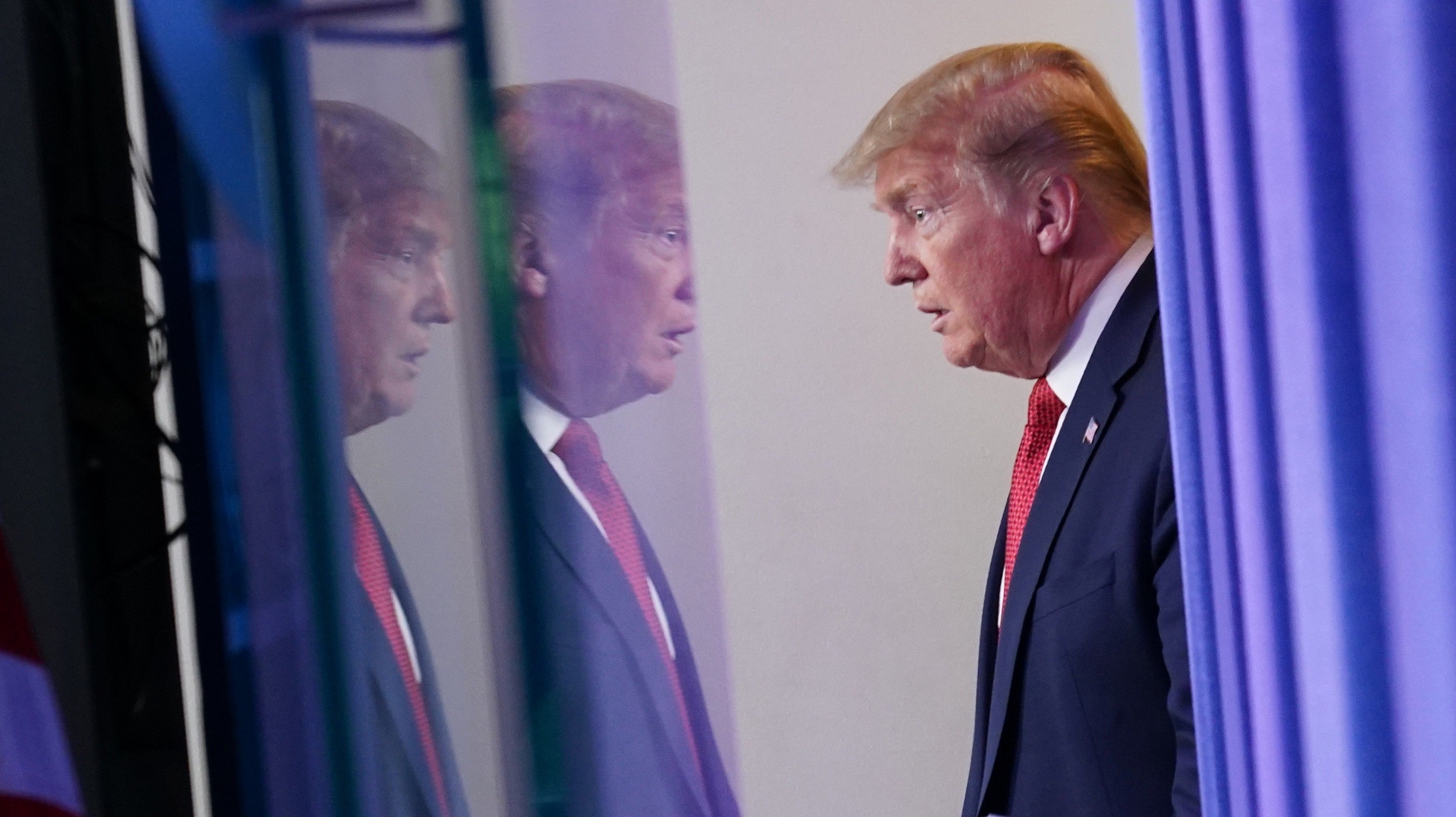 President Donald Trump, looking as confused and incompetent as ever, in the White House briefing room on April 16, 2020. (Photo: Getty Images)

In the early 1980s, Washington Post editor Joel Garreau wrote about how he would redraw the map of North America as new countries, giving each region a new name. There was Dixie in the south, Ecotopia in the northwest, and the Breadbasket in the Midwest, among plenty of others. With the U.S. currently splintering into several distinct factions during the covid-19 pandemic, it feels like the U.S. needs some new names for the nations that appear to be forming. And since the term “united states” is taken, we’ll have to get creative.

The governors of several Midwestern states announced a new alliance to coordinate strategies for when and how they’ll “reopen” their economies after the coronavirus lockdown. Shelter-in-place orders have been instituted by most states and cities to save lives as covid-19, the disease caused by the new coronavirus, has spread in the U.S., infecting more than 750,000 Americans and killing at least 40,000. A record 4,591 Americans were reported dead from covid-19 on April 17.

The governors of Illinois, Indiana, Kentucky, Michigan, Minnesota, Ohio, and Wisconsin said on Thursday that “a formal partnership” would allow the states to use “similar criteria” for deciding when to open up. Iowa, Missouri, North Dakota, and South Dakota all declined to be a part of the new alliance, with South Dakota’s governor being a particularly egregious example of a leader who refused to issue a lockdown. South Dakota has emerged as the new worst hotspot for covid-19, with at least 598 infections linked to a single pork plant in Sioux Falls.

The Midwest coalition is similar to others we’ve seen among states on the west coast and in the northeast, as local authorities take it upon themselves to form coherent plans in the wake of failed leadership from the federal government. The governors of California, Oregon, and Washington have formed the Western States Pact. The governors of New York, New Jersey, Connecticut, Pennsylvania, Massachusetts, Rhode Island, and Delaware have formed an alliance that the governor of Connecticut called the Covid Corridor. Maine, New Hampshire and Vermont may even be added to the northeast alliance soon, according to CBS News. 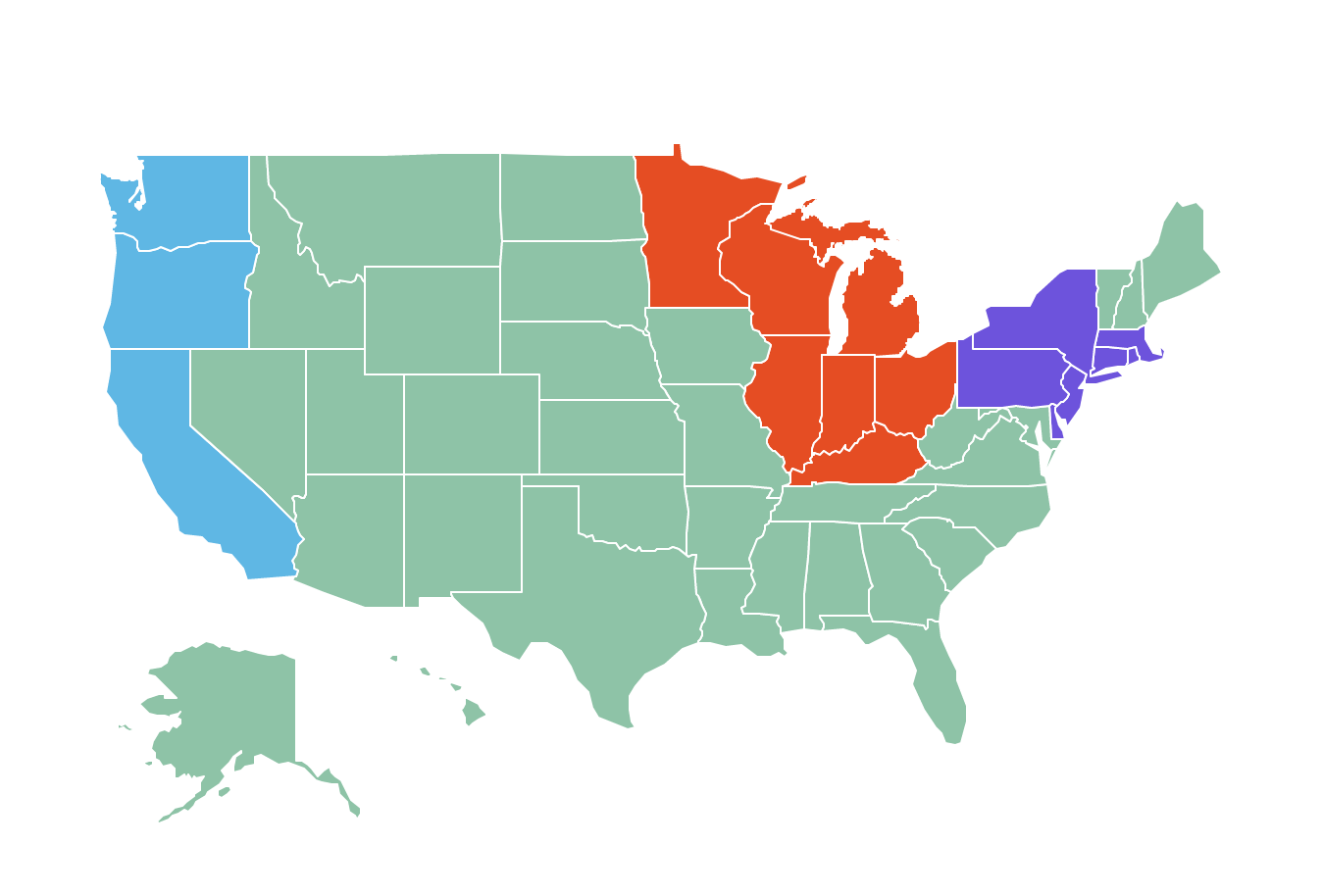 The three coalitions formed by state governors to coordinate a response to the covid-19 pandemic as President Donald Trump fails to form a coherent strategy (Image: Infogram)

President Donald Trump has previously said that he has “total authority” over the states, only to backtrack a day later, making it clear that even if Trump believes he’s in charge, he’s not providing any of the leadership necessary to actually help anyone with a coherent plan. There are no indications that Trump’s most recent “plan,” announced yesterday at the White House, will have any bearing on what individual states decided to do in the coming weeks and months.

Which brings us to the question of names for our brave new world. In the 1980s, Joel Garreau split up the country into nine imaginary regions, some with straightforward names like New England and MexAmerica, and others with more creative names, like The Foundry and Ecotopia. Hilariously, Garreau called the Rocky Mountain region The Empty Quarter, which seems inaccurate for a number of reasons. But at least it was more creative than his name for the “new” region of Quebec. It’s just called Quebec. 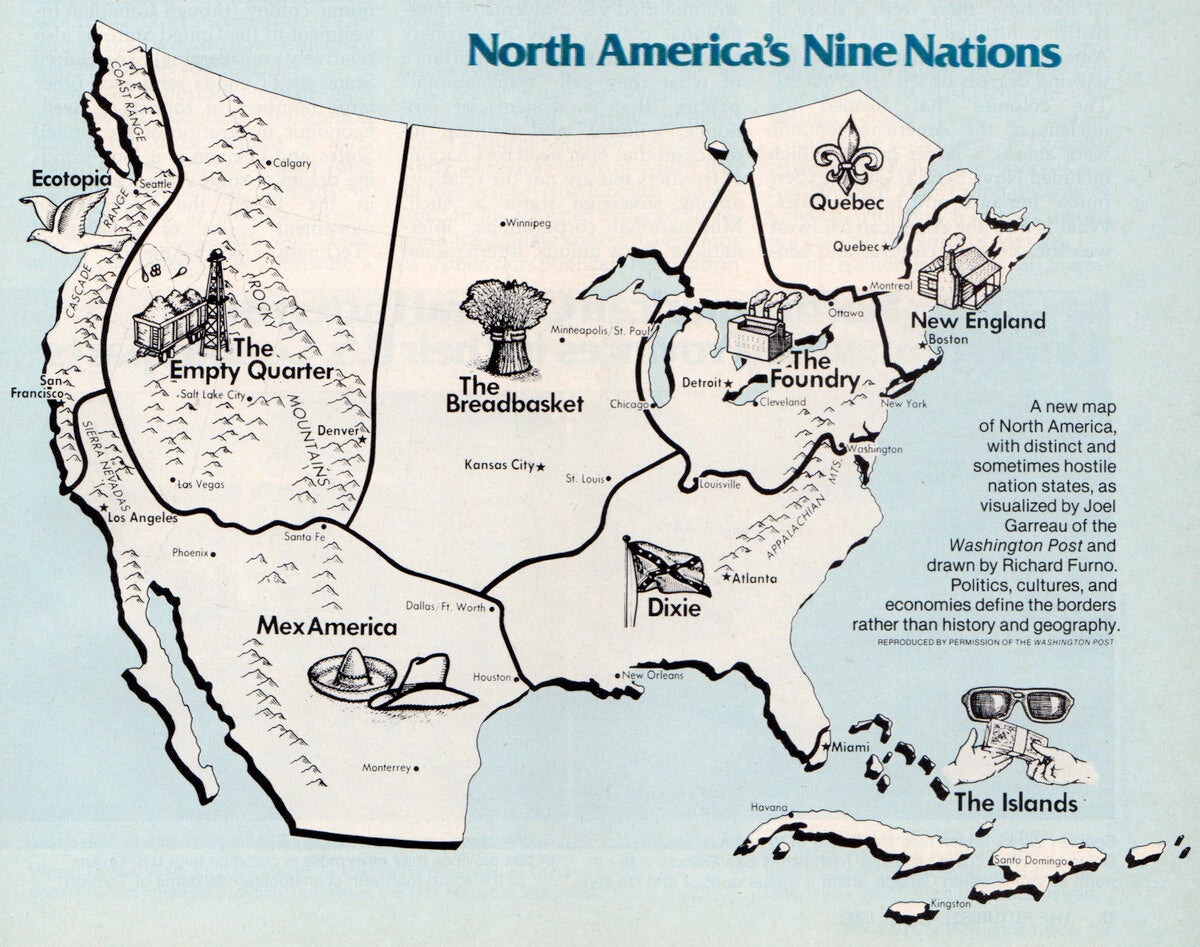 Richard Furno illustration scanned from the August 1980 issue of The Futurist magazine (Image: The Futurist)

But what are we supposed to call these new regions of the United States, with one on the west coast, another in the east, and the latest in the Midwest? I posed that question to Twitter and got some interesting responses. For the Midwest, there were ideas like The Coalition, South Canada, Flyoverstan, and simply Big Ohio. There were also names like Ohsippi or Missio, a combination of the Mississippi and Ohio Rivers. My own contribution of Great Lakesylvania didn’t seem very popular.

Back in 2017, I spoke with a former employee at the U.S. State Department, Dr. Paul Goble, who worked on geographical issues surrounding the Soviet Union in the 1980s, and it really opened my eyes to the possibility of border disruption in the 21st century.

“The tragedy of the American foreign policy of my generation, and I’m 68, is that we grew up and had our worldview formed during the longest period of no border changes in Europe,” Goble told me in 2017, talking about the postwar era of 1945 to 1990, ending with the fall of Soviet Union.

“There are a lot of people who have trouble imagining that the borders might change. It’s probable that over the next hundred years we’ll see the emergence of more countries. People have real trouble with that,” Goble said.

The capital-U “United States” may be on the brink of collapse, thanks largely to the repeated failures of an astonishingly stupid president. But long live the united states, whatever we call them from here on out.

“[Americans are] locked into a mindset that somehow borders aren’t changed and that we change things within borders,” Goble told me in 2017. “I’ve always thought that America should always understand, coming from the British Empire, but we don’t seem to have learned very much from that history.”

What do you think we should call these new alliances within the current borders of the U.S.? Are you happy that your state has or hasn’t joined one? What do you think President Trump will try to do if entire regions of the country try to secede? Let us know in the comments.

And take care of yourself during these trying times. There’s a painful road ahead during the coronavirus crisis. But even as things get torn apart, geopolitically and otherwise, there are good people around, no matter where the world’s invisible lines are drawn on a map. I promise.