This Egg Is Actually One Of The Most Powerful Drones You Can Buy For $2,699

You don’t have the chance to review an egg-shaped drone every day. The PowerVision PowerEgg X is exactly that: a powerful quadcopter that resembles an ostrich egg when folded. Although at first, I suffered the natural consequences associated with roughly underdeveloped software, things have changed quite a bit. With each new firmware update, the PowerEgg X has proved to be one of most intelligent and versatile commercial drones you can buy for $2,699. 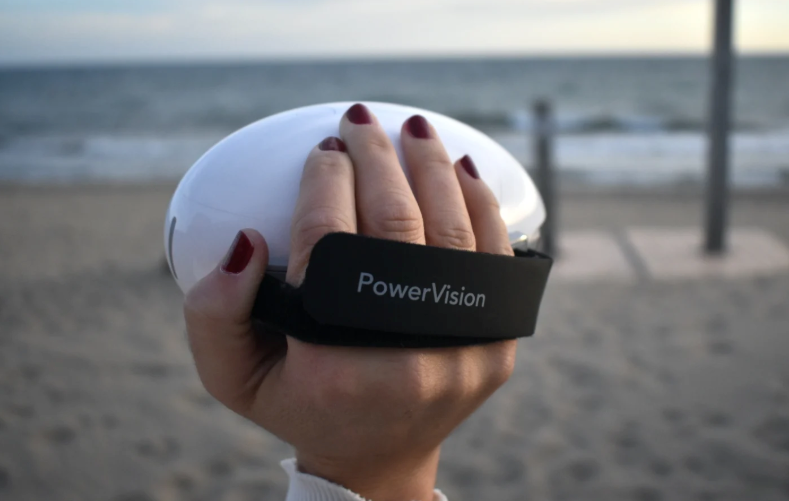 A drone that turns into an egg, and then into a handheld video camera. Probably a Decepticon

Good value for the price. The Wizard version comes with plenty of accessories.

The software needed a lot of updates to work properly. Still need some tweaks.

PowerVision, which is more known for its submarine robots than for its egg-shaped drones-in-disguise, sells two versions of the PowerEgg X. The first one is a basic package. The other one has many extra accessories, including another battery and a waterproof case.

The PowerEgg X can be used in two ways: without the propellers it functions like a handheld video camera. In camera mode, the egg weighs 1.15 pounds and its battery lasts for about three and a half hours. In drone mode (with the propellers attached), the egg weighs 1.9 pounds (860 grams) and its battery lasts for up to 30 minutes. Each battery has a capacity of 3,800 mAh. The charger, which has a rather big power adaptor with two USB ports (to charge your phone and the remote control at the same time), offers 50W of power. The remote control has its own 3,500 mAh battery that can be charged via microUSB. 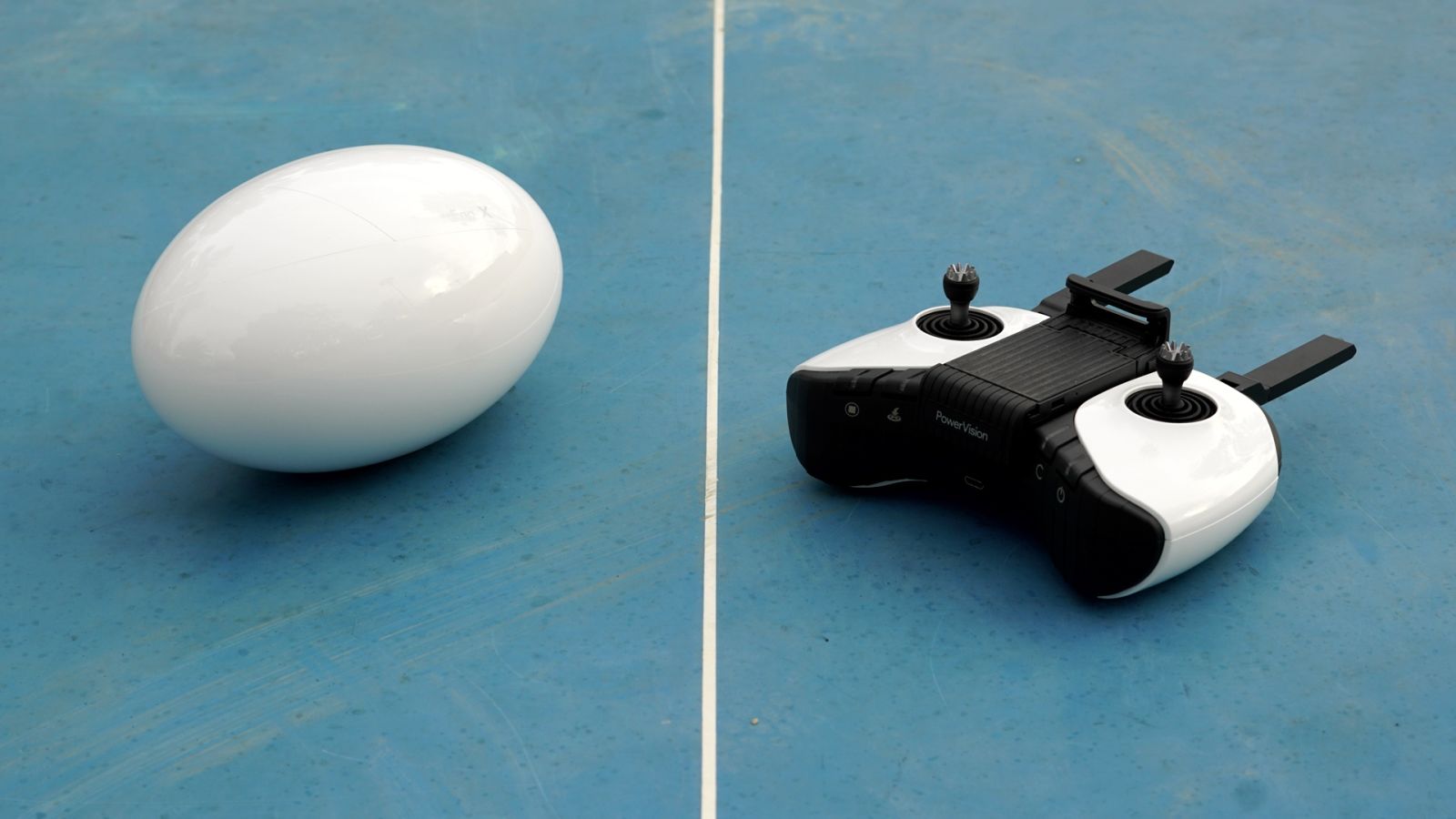 What came first, the egg or the remote control? 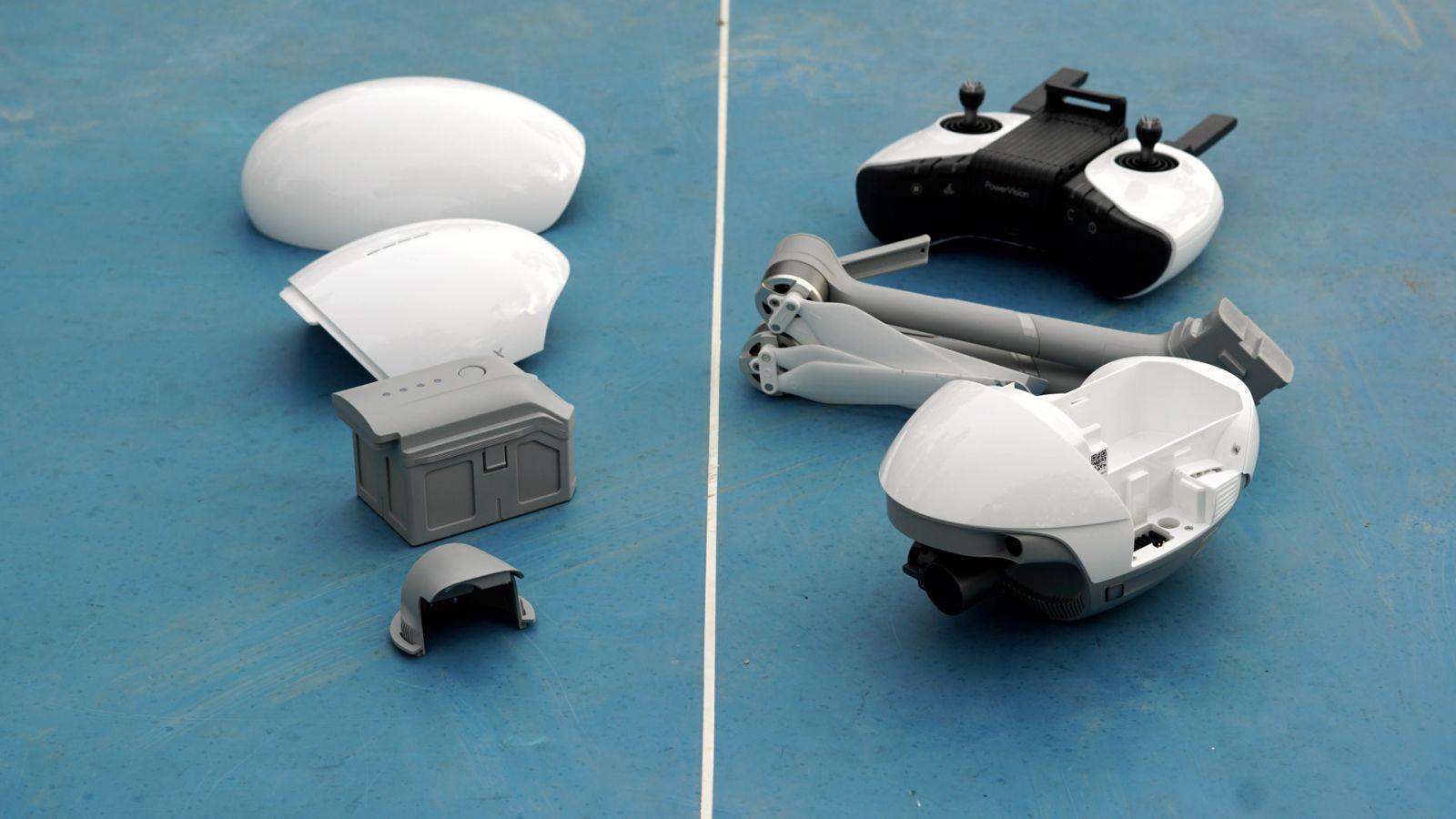 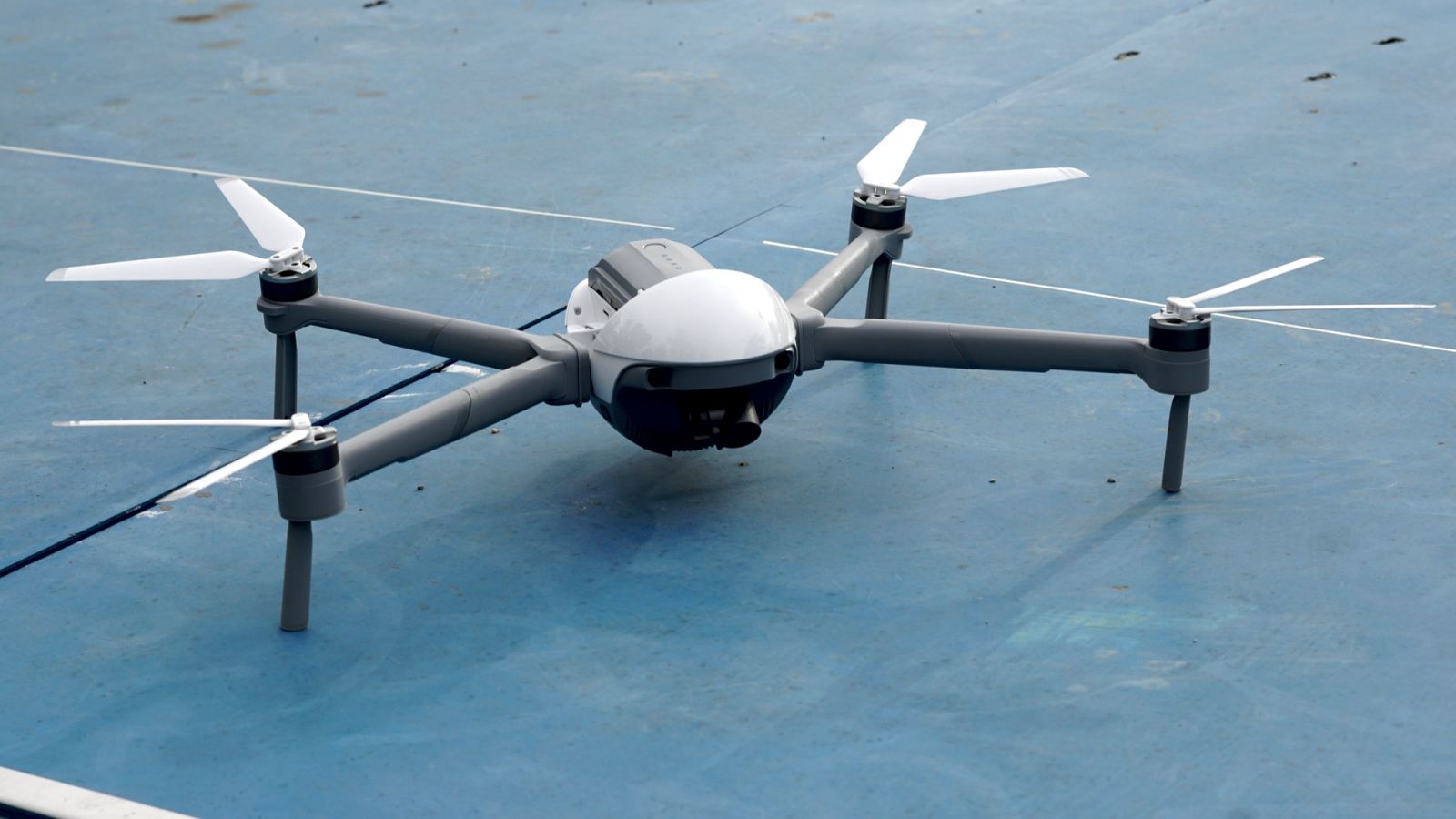 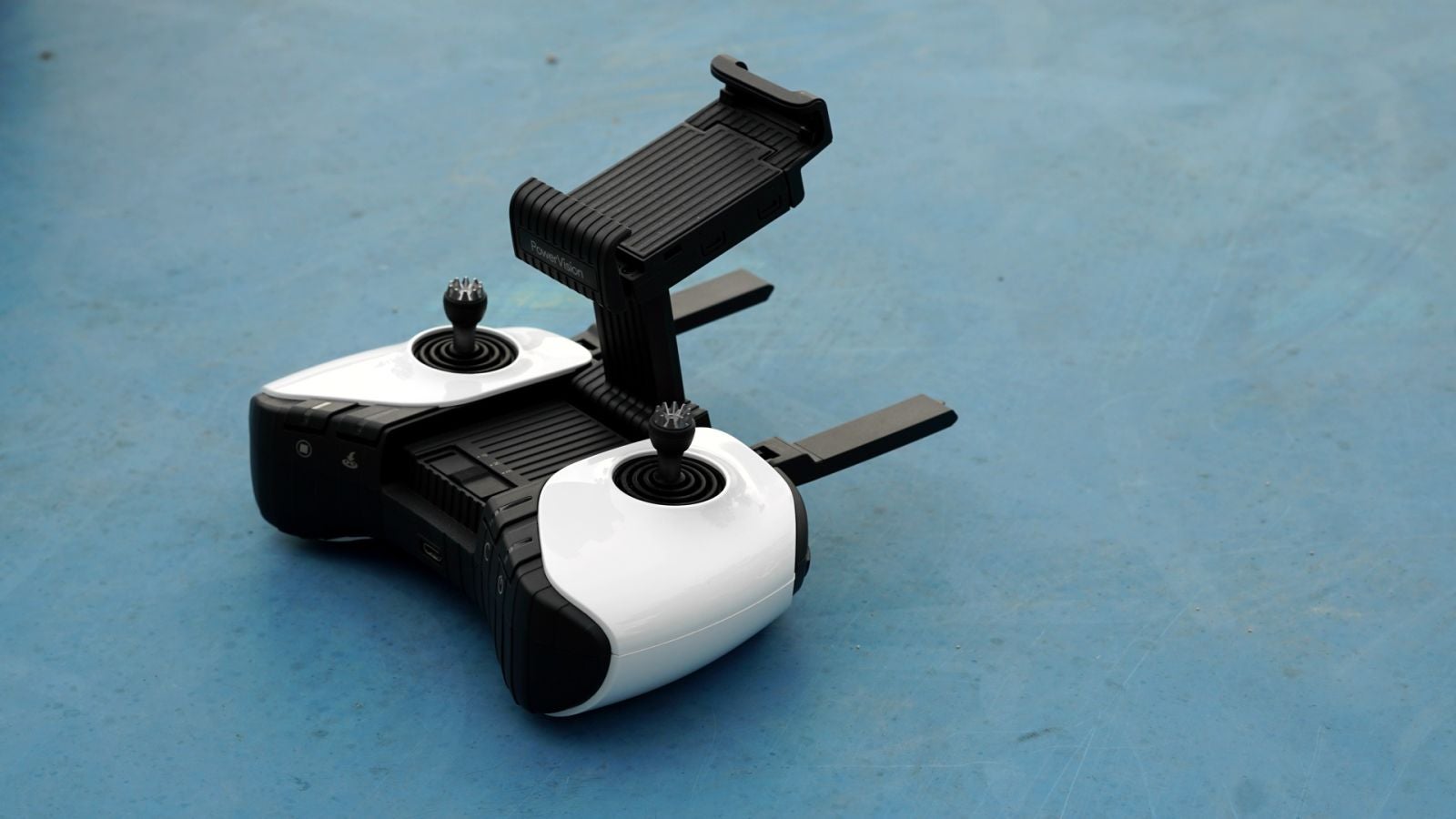 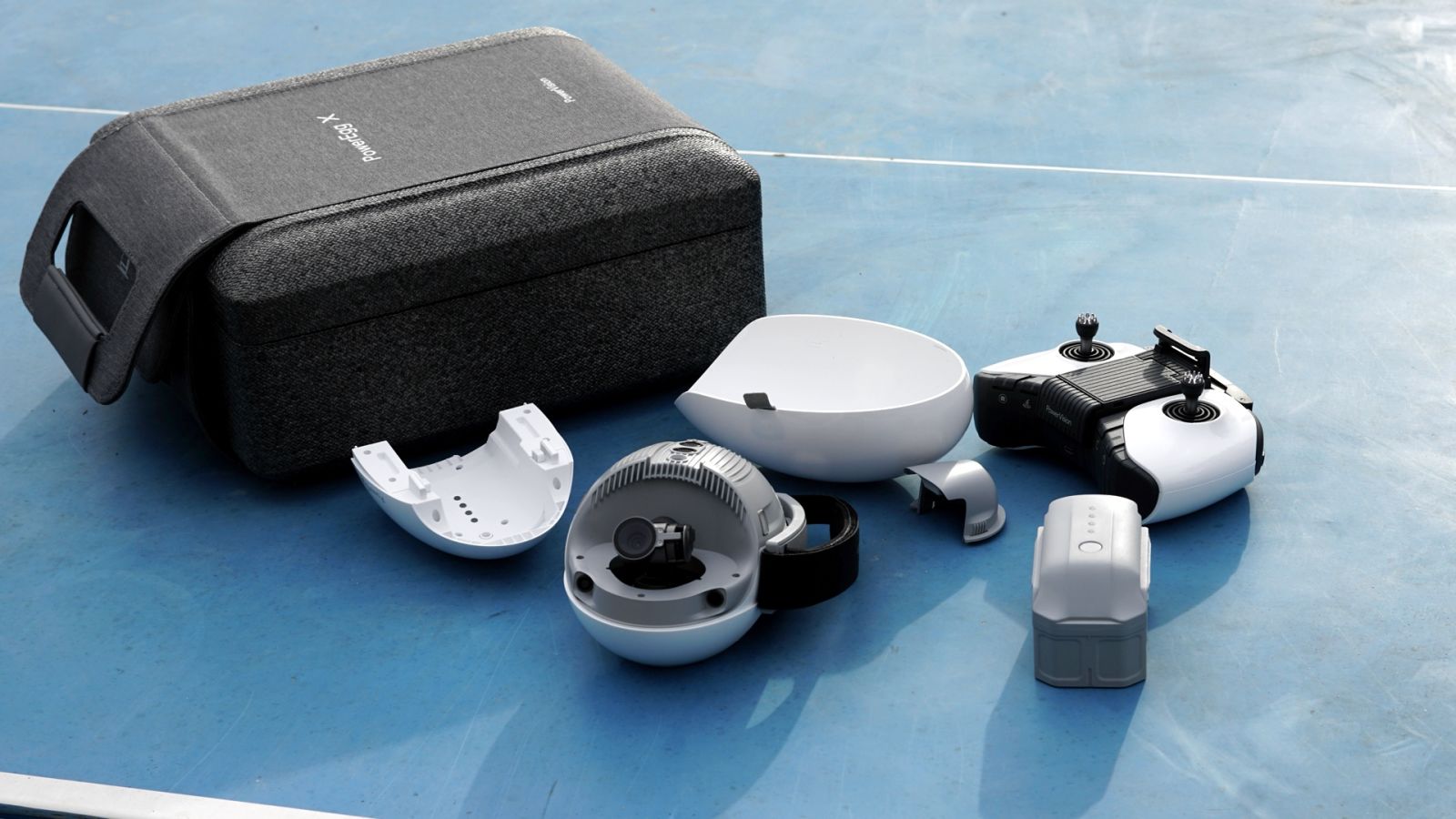 Inside, the drone is powered by a five-core CPU, a single-core GPU, four-core image processor, and a two-core neural network engine (which is what fuels the egg’s AI functions). In terms of storage, the PowerEgg X offers 6GB of internal memory plus a microSD slot for cards of up to 128GB hidden under the battery.

To connect the drone to your phone, you need the Vision+ 2 app, which is available on the App Store but not in the Google Play Store. If you use Android, the only thing you can do is download the APK from PowerVision’s website and install it manually. Some users will find another problem with this APK: It’s only available in Chinese and English.

Officially known as AI Camera Mode, the PowerEgg X’s video camera mode lets you record super stable video at ground level. It doesn’t deliver the same video quality as a high-end smartphone, but no smartphone has a three-axis gimbal capable of following a moving object.

To use the PowerEgg X in camera mode, you just have to tether the hand strap to the egg, turn on the drone with one short press and one long press and connect your phone to the wifi network it generates with the password 12345678 (not especially safe PowerVision). The PowerEggX can record 4K video up to 60fps and take photos of up to 12 megapixels.

In the long run, 1.15lbs turns out to be pretty heavy for a handheld camera, especially if you have your phone in the other hand to see the image in real-time (there’s no built in display on the PowerEgg X). However, the app lets you control the camera manually, so you can put the drone on a flat surface or tripod and control it from a distance. You can also let the intelligent tracking system do it on its own.

The drone doesn’t have microphones, but it does come with an option called SyncVoice that records audio from your phone and synchronises it in real-time with the video file. It also works with headphones or with any microphone connected to your phone, and it can even be used while you fly. However, I don’t recommend this because the sound tends to cut off if the signal is weak or if there is any radio interference.

When using the PowerEgg X as a handheld camera, the gimbal has three operating modes. FPV mode will follow your movements without locking a single axis. Lock mode will let you lock two or three axes. Finally, Follow mode tracks movement and unlocks the axes that handle movement from left to right as well as up and down. It locks the rotation axis.

The auto composition feature is the best function in camera mode. It allows you to select a target and keep your focus on it. The drone uses an automatic learning algorithm to recognise faces, but it can also maintain its focus on cars or other moving objects. Once it detects something (which can take a very long time, depending on the light), it doesn’t lose it even though it moves far away or passes by other objects. However, the drone can get easily confused and lose focus if there are too many objects or people in the scene.

With the propellors assembled and deployed, the PowerEgg X has more volume and weight than the drones DJI sells at this price range. The good news is that it has a battery life of up to 30 minutes, which its better than the Mavic Air. Besides that, it can reach a velocity of up to 40mph (64 km/h) and can withstand winds of up to 23mph (37 km/h). It flies surprisingly stable considering its shaped... well... like an actual egg.

The PowerEgg X has two sensors on its front side and two sensors on the bottom. It can detect obstacles up to 65 feet away, which helps ensure that it places itself in a safe zone before landing. That said, the obstacle detector is very noisy and can drive you crazy with alert beeps (I had to silence my phone).

The video detail in 4K is excellent, but the dynamic range, the reliability of the colours and white balance can vary tremendously depending on the light. These are settings that you can adjust manually on the app, but you normally don’t have time to be that detail-oriented when you’re flying the drone.

The remote control is also bulky and heavy, but it’s resistant to rain and quite ergonomic. It comes with three cables (lightning, microUSB, and USB-C) and a customisable button. The signal has a 3.7 mile reach and the images from the drone are transmitted real-time in Full HD. There is one negative point, though: Big phones don’t fit in the remote control phone holder if they’re in a case.

The PowerEgg X uses a GPS/GLONASS signal to return to its starting point when it’s running out of battery or when it has lost signal. You can also take advantage of this feature and use it in the opposite way. A function called Point of Interest lets you establish a location on a map and have the drone fly there and record it in circles.

The QuickShot feature puts the camera focus on a target and records a small video clip while it carries out a predetermined flight. It has similar flight modes to a DJI drone: fading away, sky rocketing, surrounding, spiral, and ellipse. The AI Track mode, or the intelligent tracking mode, is more interesting and works very well with people, bicycles and cars. You can ask the drone to follow a moving target from behind or in parallel, and you can lock the camera on the target. This allows you to record it from a fixed point or set the movements with the remote control (which makes it easy to record more cool and creative content).

The Wizard package includes a transparent plastic shell that turns the PowerEgg X into a rain-resistant drone. Combined with its wind resistance capacity, the drone is able to fly “even in strong rain,” according to PowerVision. Given that I live on Costa del Sol (Spain’s sunny and dry southern region), I haven’t been able to confirm this, but I did spend an entertaining afternoon near the pool watching the drone take off and land.

Besides having a waterproof shell, the Wizard version includes a pair of floaters for the drone’s legs that allow you to manoeuvre the drone over the water and even glide over it without fear. Though this last thing can only be done if you have certain skill with the joysticks. It’s very cool, but waterproof mode adds weight to the PowerEgg X, which reduces its battery life. The app detects the additional weight, and limits the drone’s velocity and deactivates the intelligent flight features.

The waterproof shell resisted all the dips I made it go through, but the more I got it wet, the more condensation appeared in front of the camera. On the other hand, three of the drone’s four legs got dislodged (I suspect this happened during one of the times we put on the floaters) and now they don’t fit correctly. Beware of that. The legs are fragile. 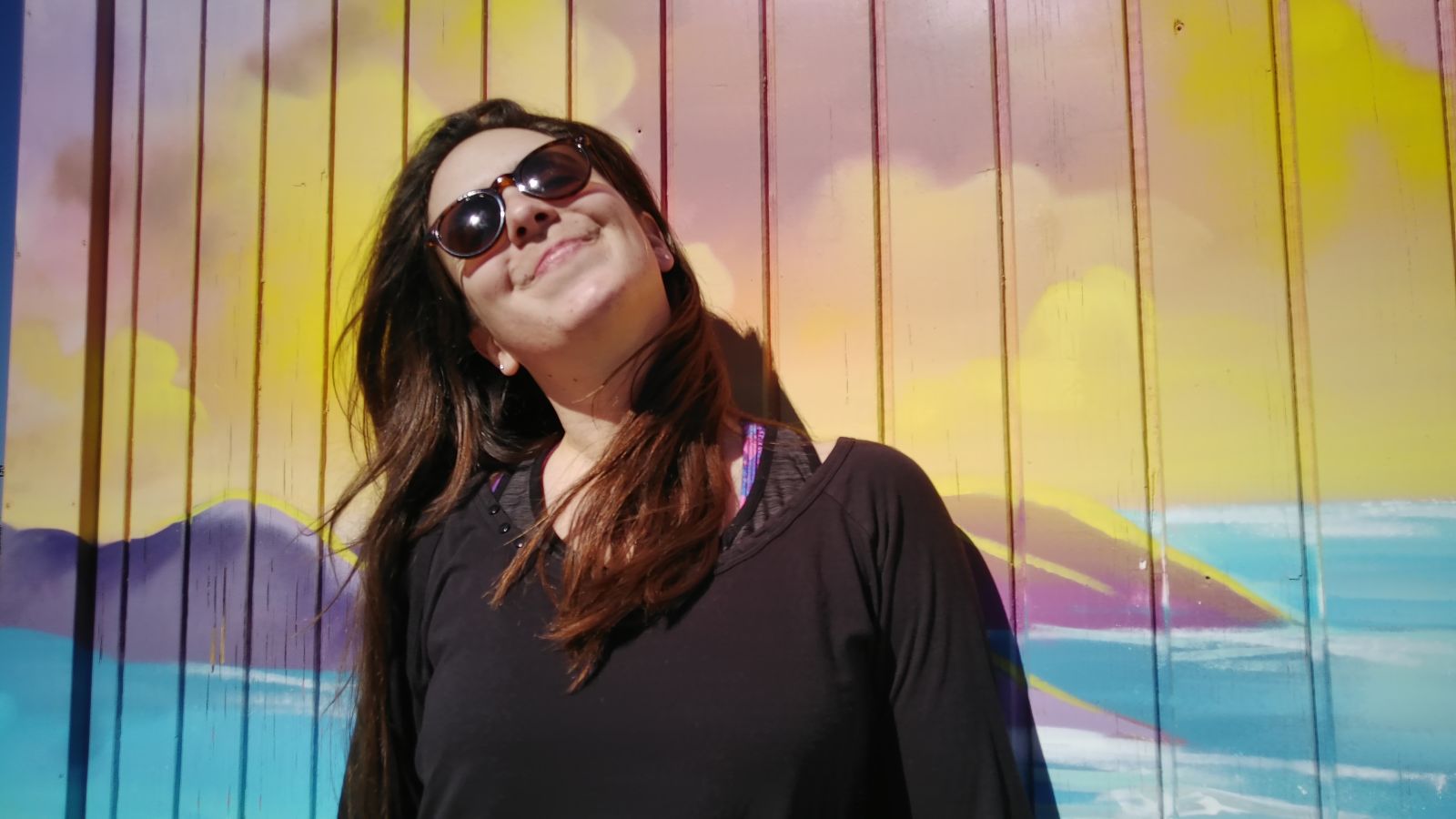 It’s difficult to focus when you’re close up. Click for more photos. 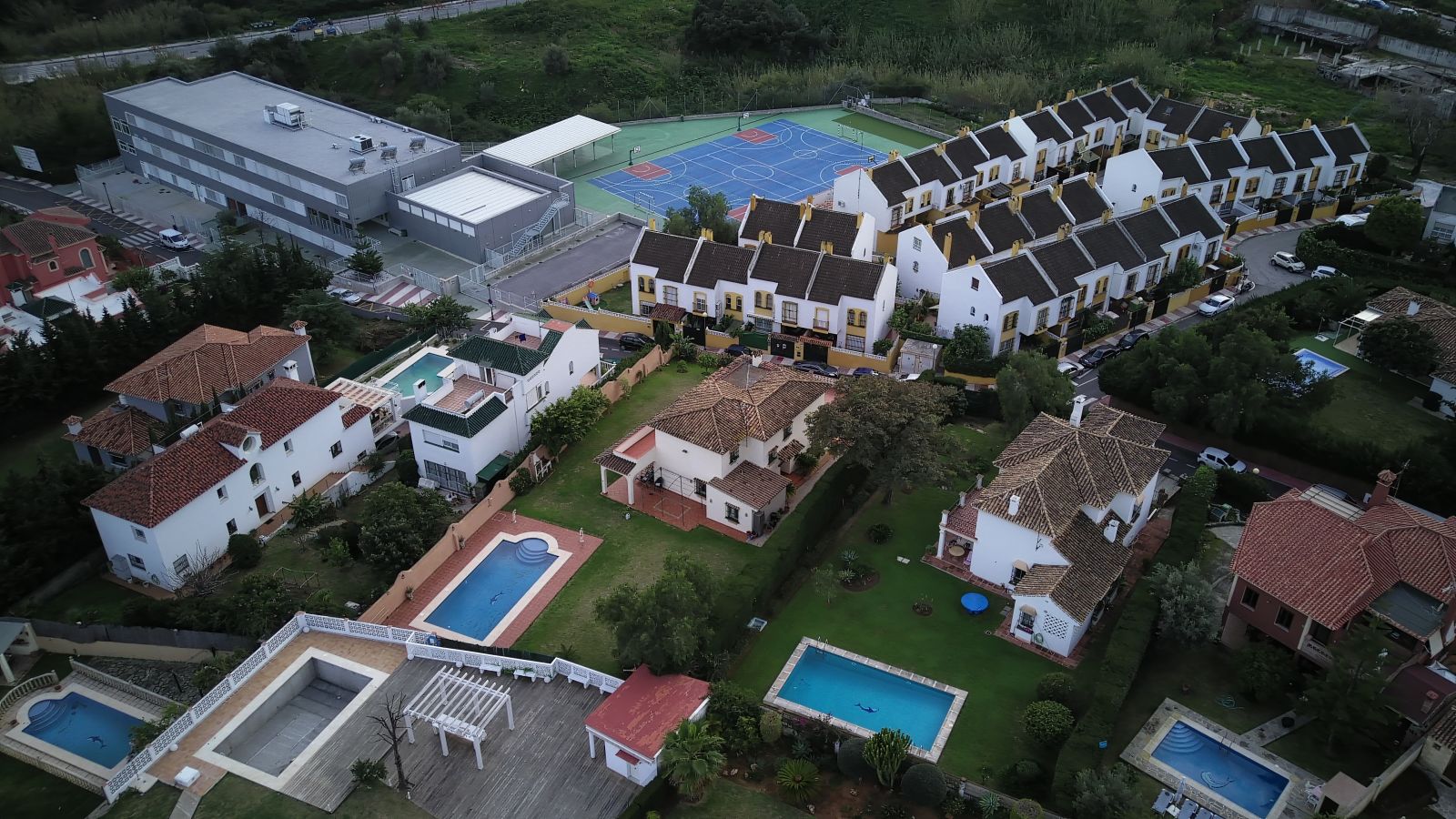 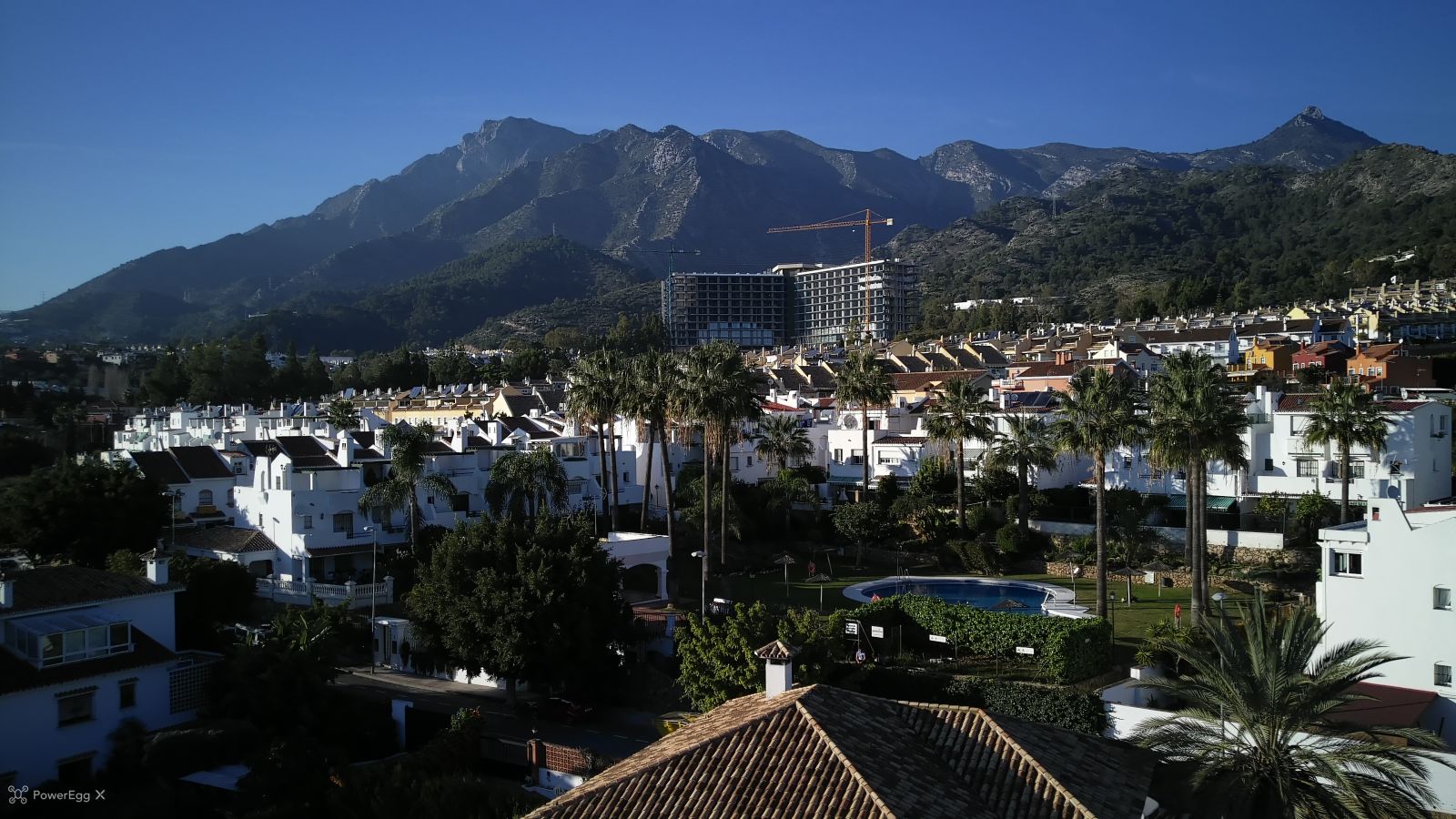 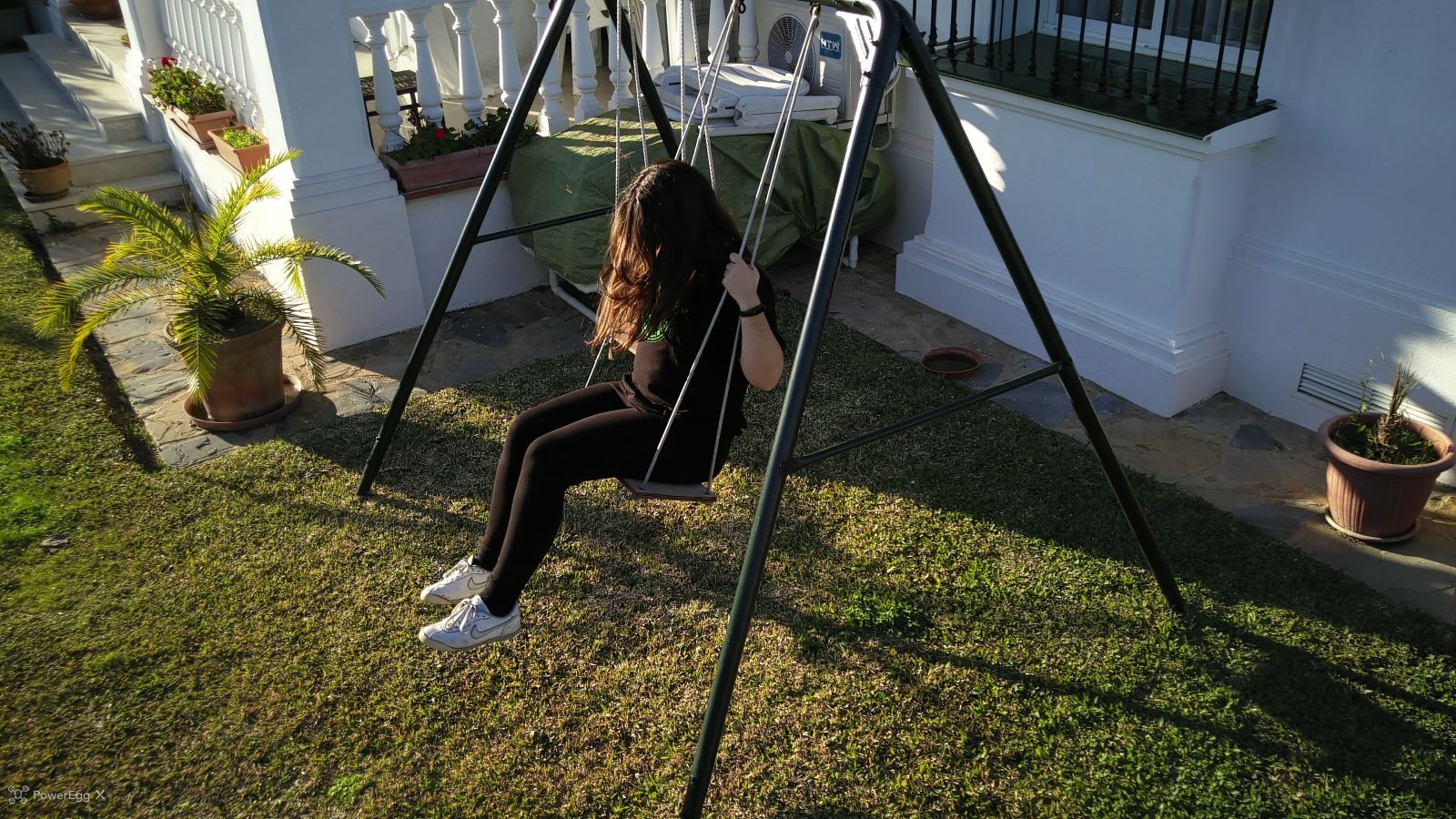 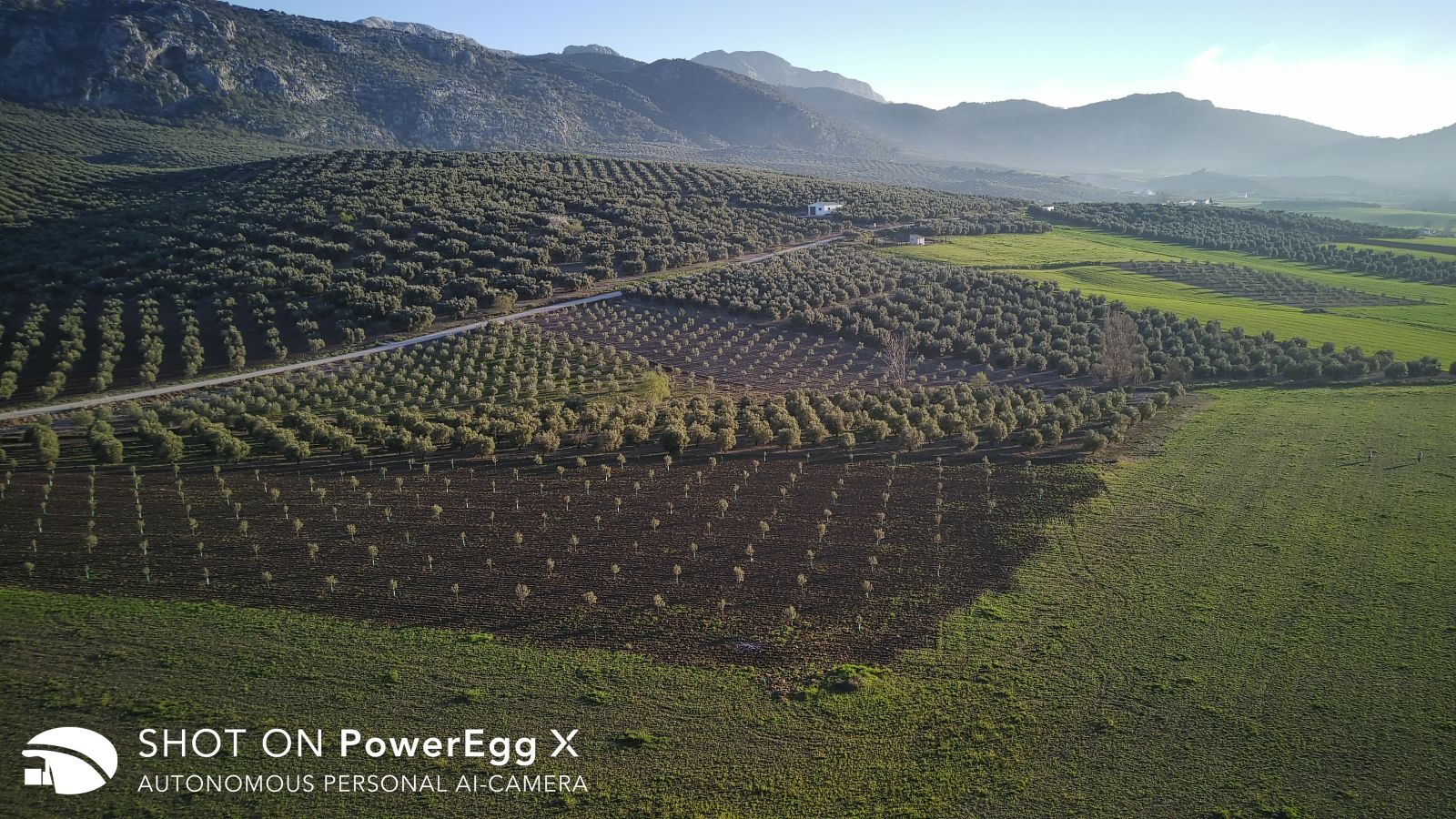 The PowerEgg X’s camera has a 12-megapixel sensor and 27mm f/1.8 lens with a field of vision of 170 degrees. The aerial photos are good, but one problem that I found when I had the drone in my hand is that it is hard to focus on close-up distances, even if that distance is only a bit more than three feet away.

In camera mode, the PowerEgg can detect some gestures. You can activate intelligent tracking with the palm of your hand, which maintains the focus on the person that has lifted their hand. Taking a selfie in three seconds is as easy as making the V for victory sign. The “OK” gesture takes a group photo after three seconds. 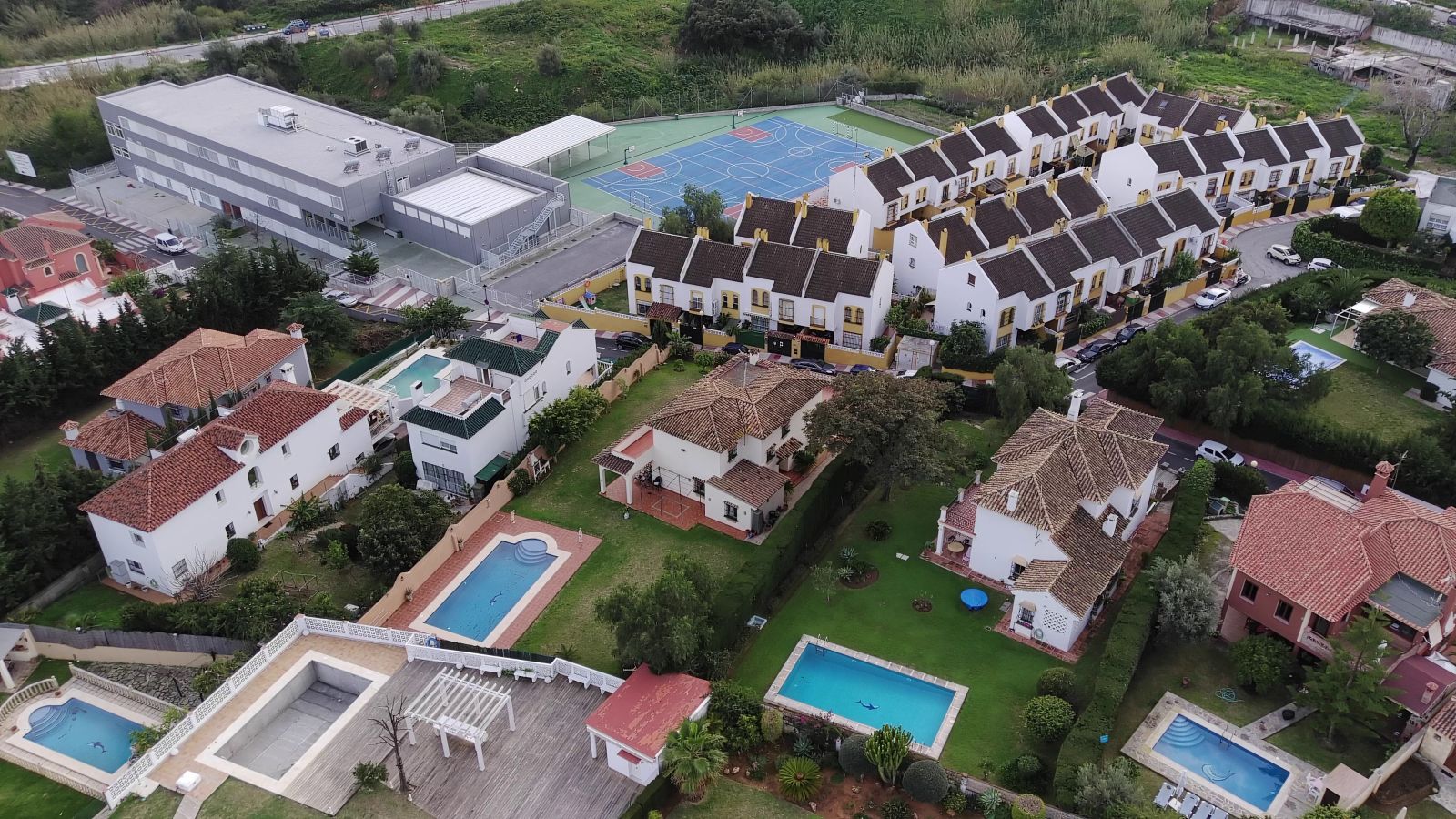 You can compare this screenshot with the second photo above. Click to see more photos. 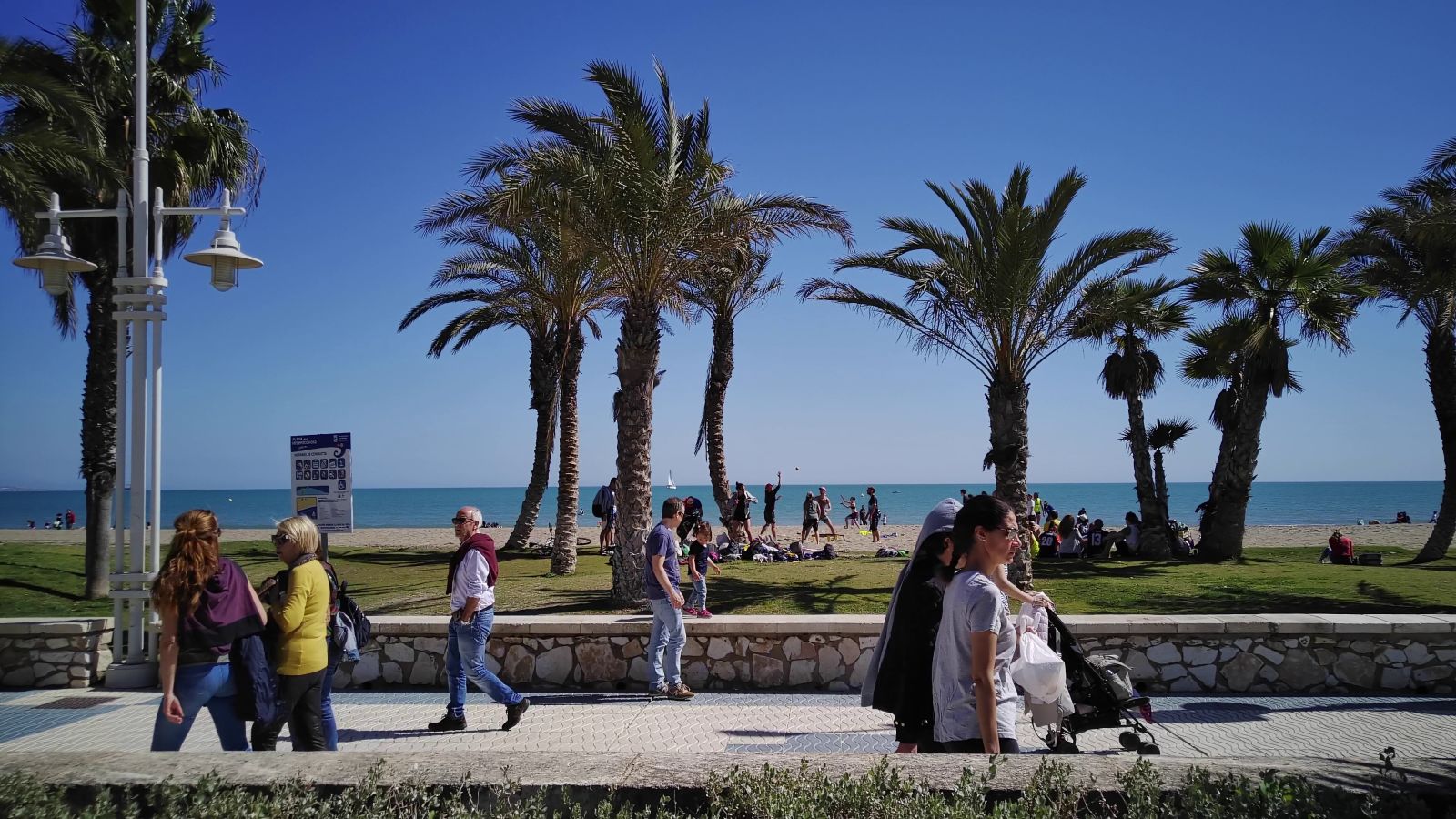 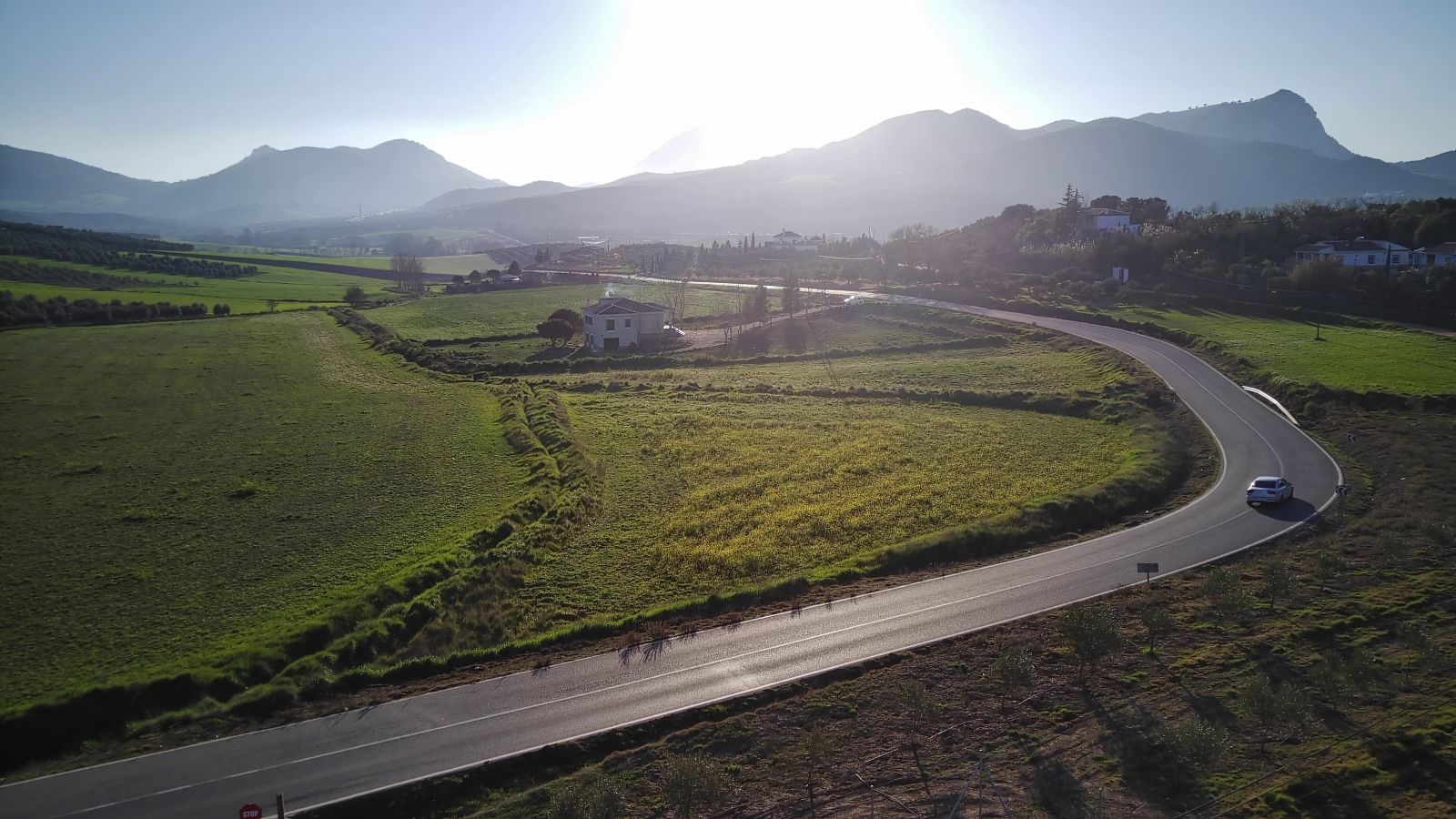 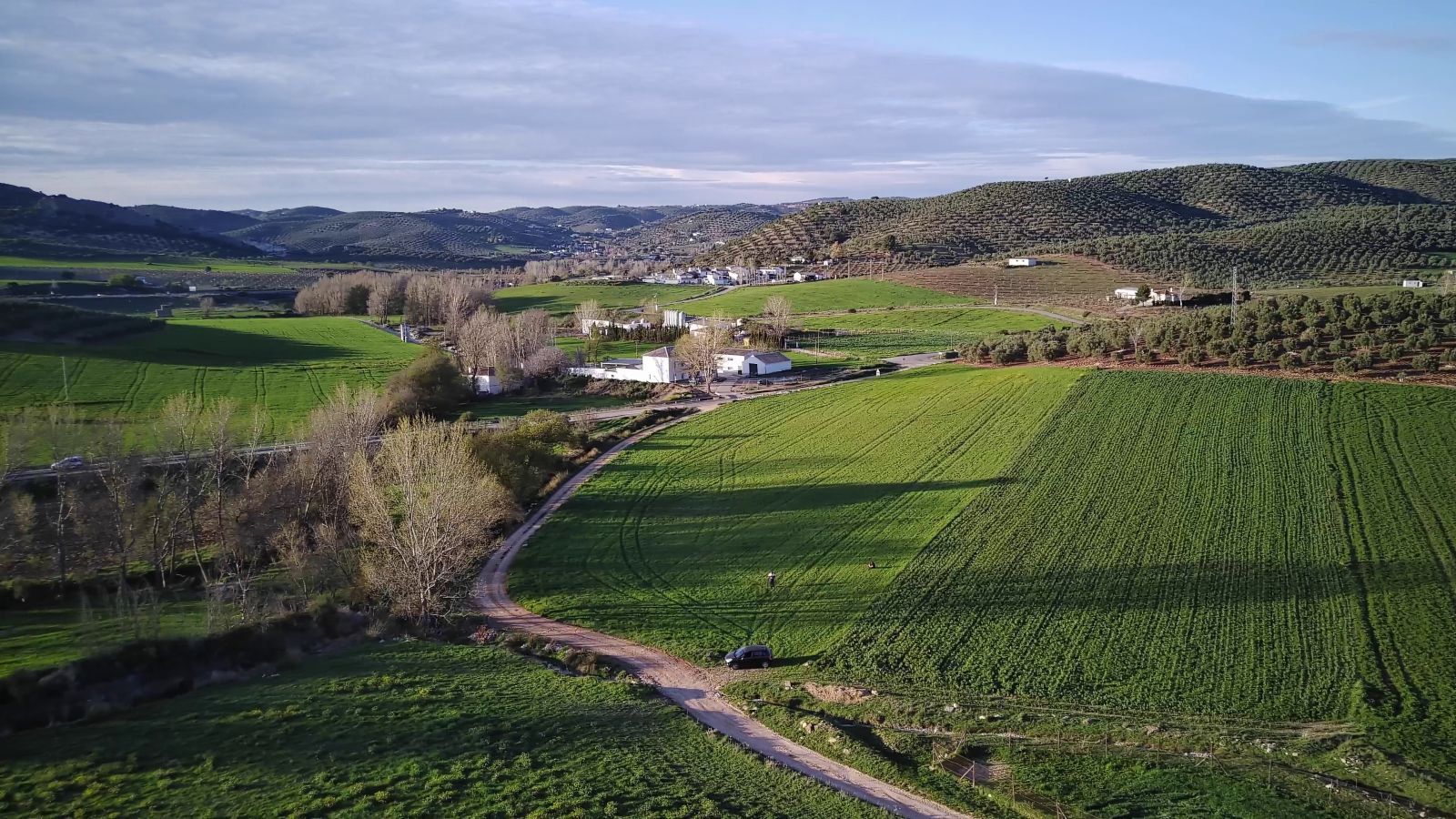 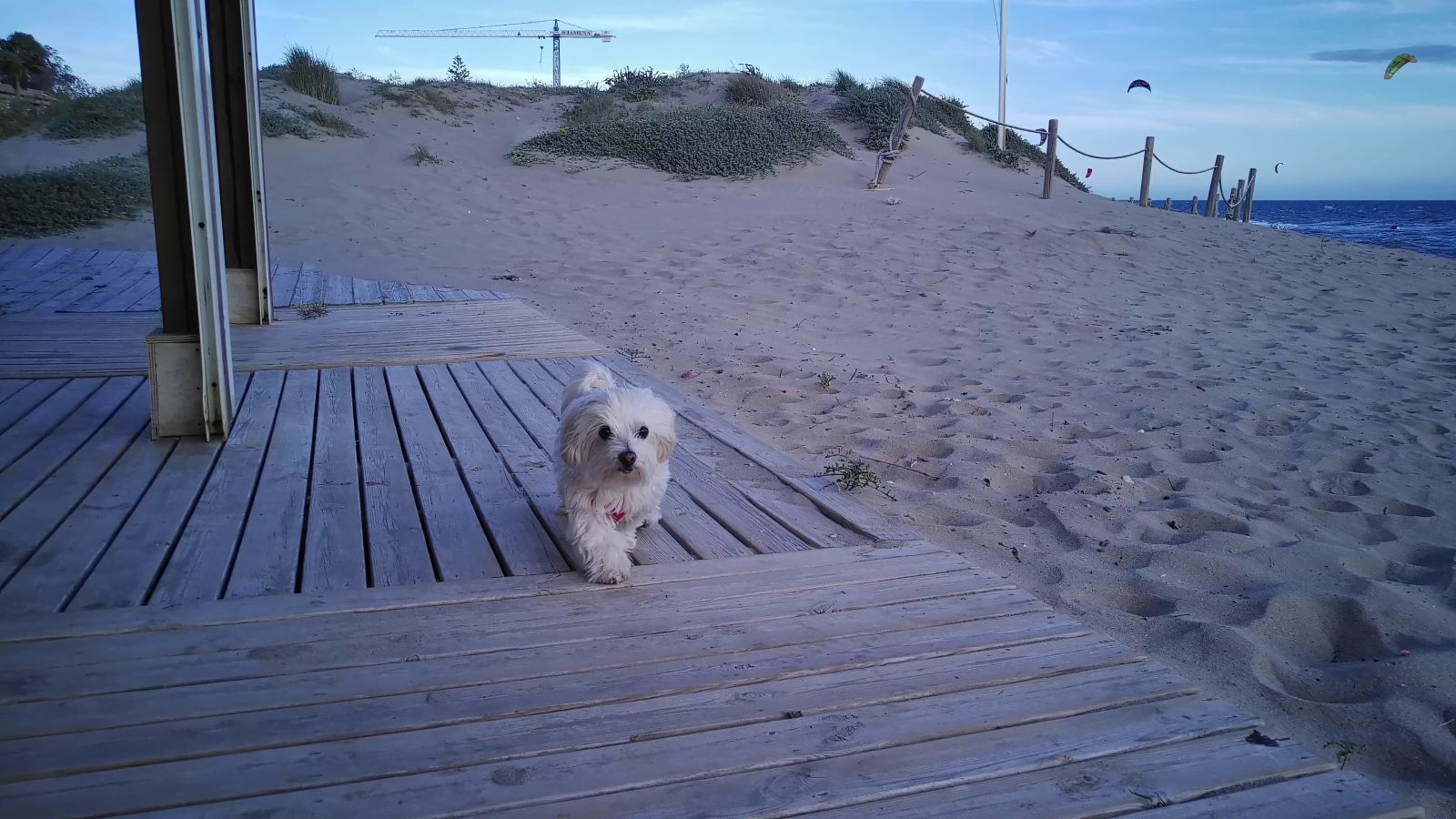 Although there are some buttons dedicated to this in the remote control, changing from photo mode to video mode when you’re flying can be a distraction, especially if you only have one battery. One solution, if you’re flexible and not too demanding, is to record in 4K and then take snapshots of the video. Except for the detail and contrast, that shots can pass as Instagram photos without a problem.

If you’re wondering why I left the watermark on the first video, it’s because it automatically sticks itself on the video every time I open the app. I hope that it’s a bug and that they fix it soon. This last sentence can apply to almost everything about this drone. When I received it, I could barely use it. The image lost signal constantly, it didn’t recognise any object in the scene and the quality of videos was quite underwhelming. I had to get in touch with PowerVision’s post-sales service. The drone disconnected itself during a firmware update and stopped working correctly. Finally, a technician told me how to reinstall the firmware manually with a microSD card.

And here we are. After three or four updates , my experience with the drone has improved greatly. Finally it looks like there is life beyond the DJI. 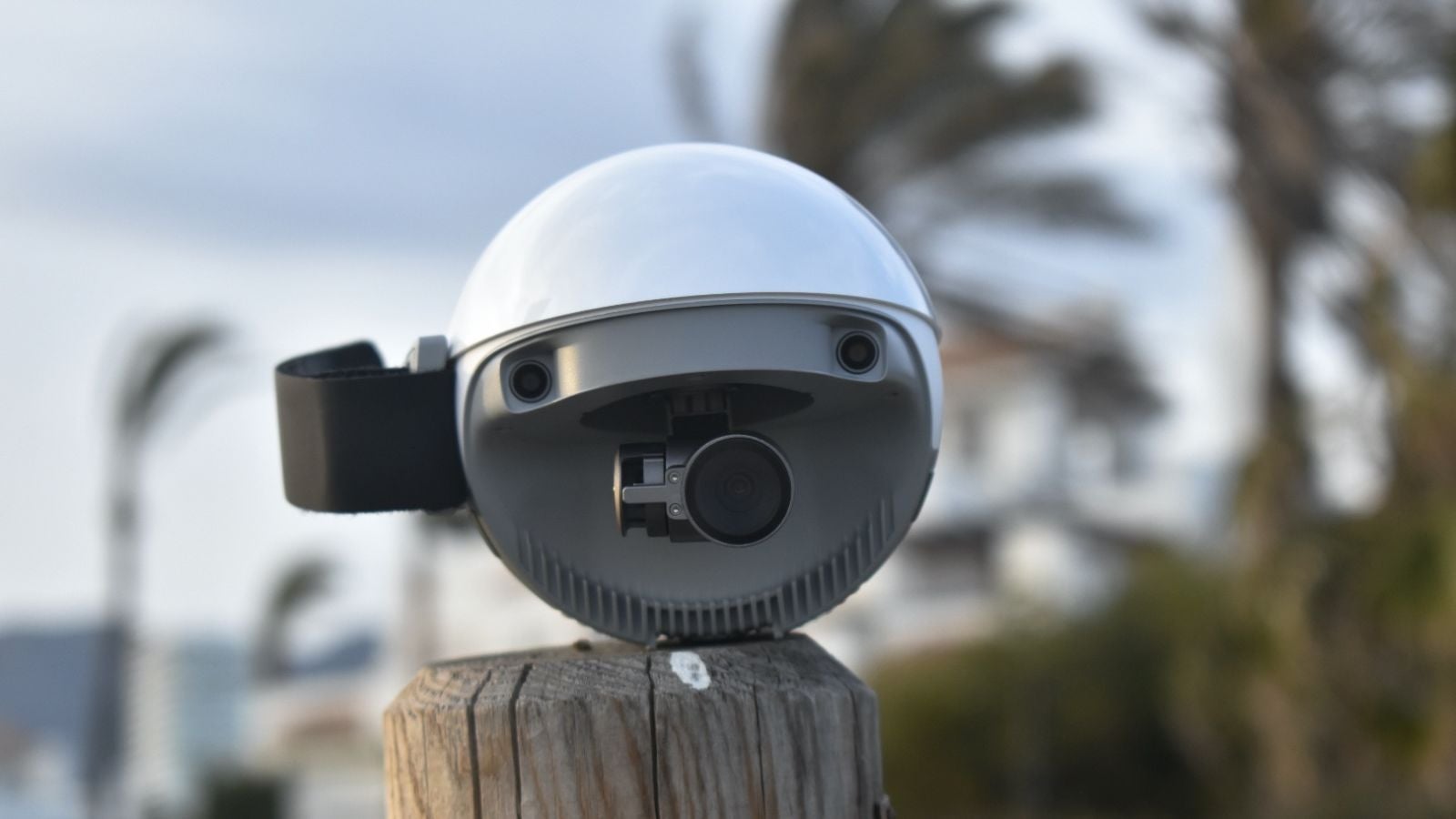 You can screw the PowerEgg X onto a tripod, if you have a tripod. Click to see more photos. 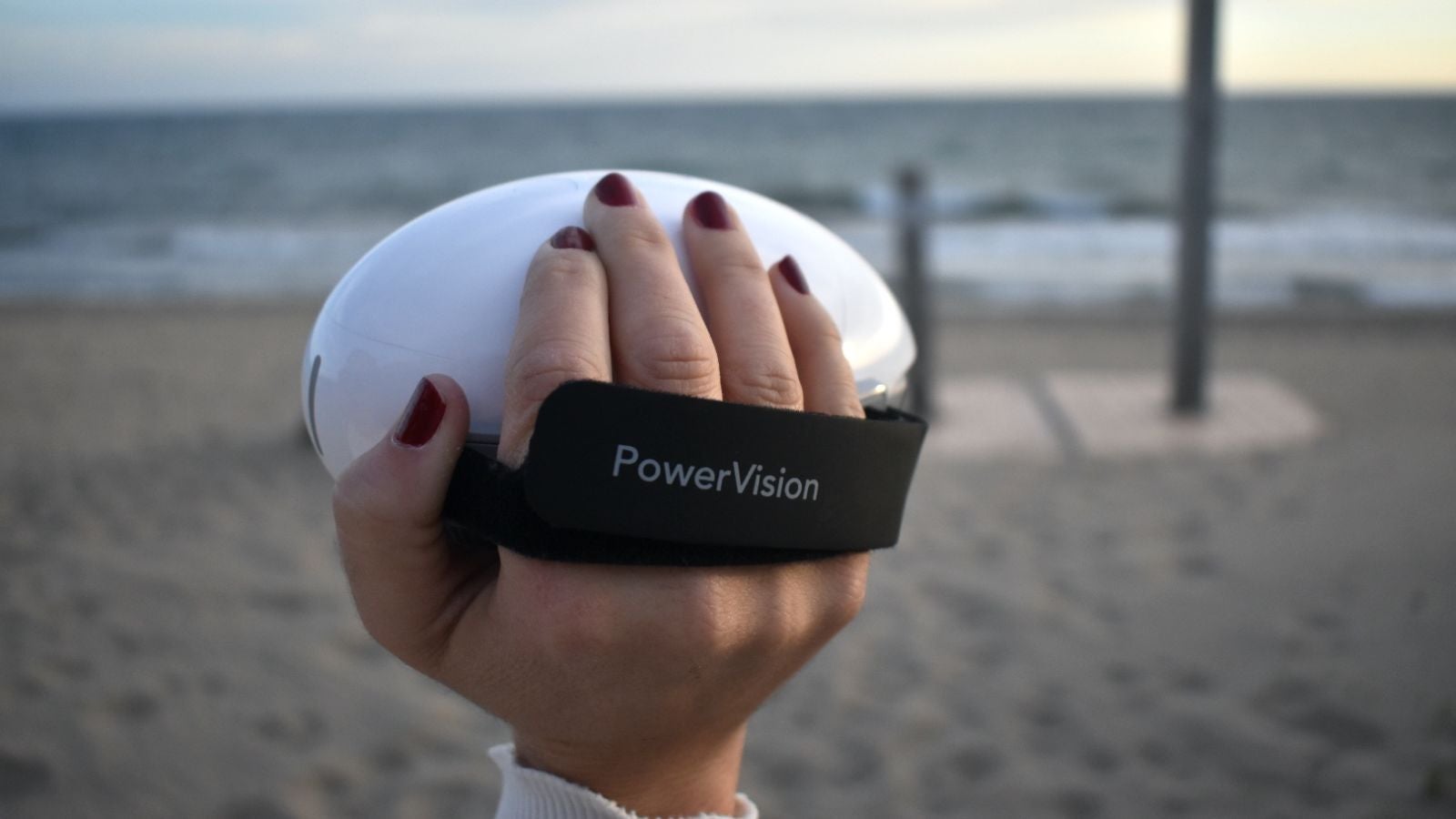 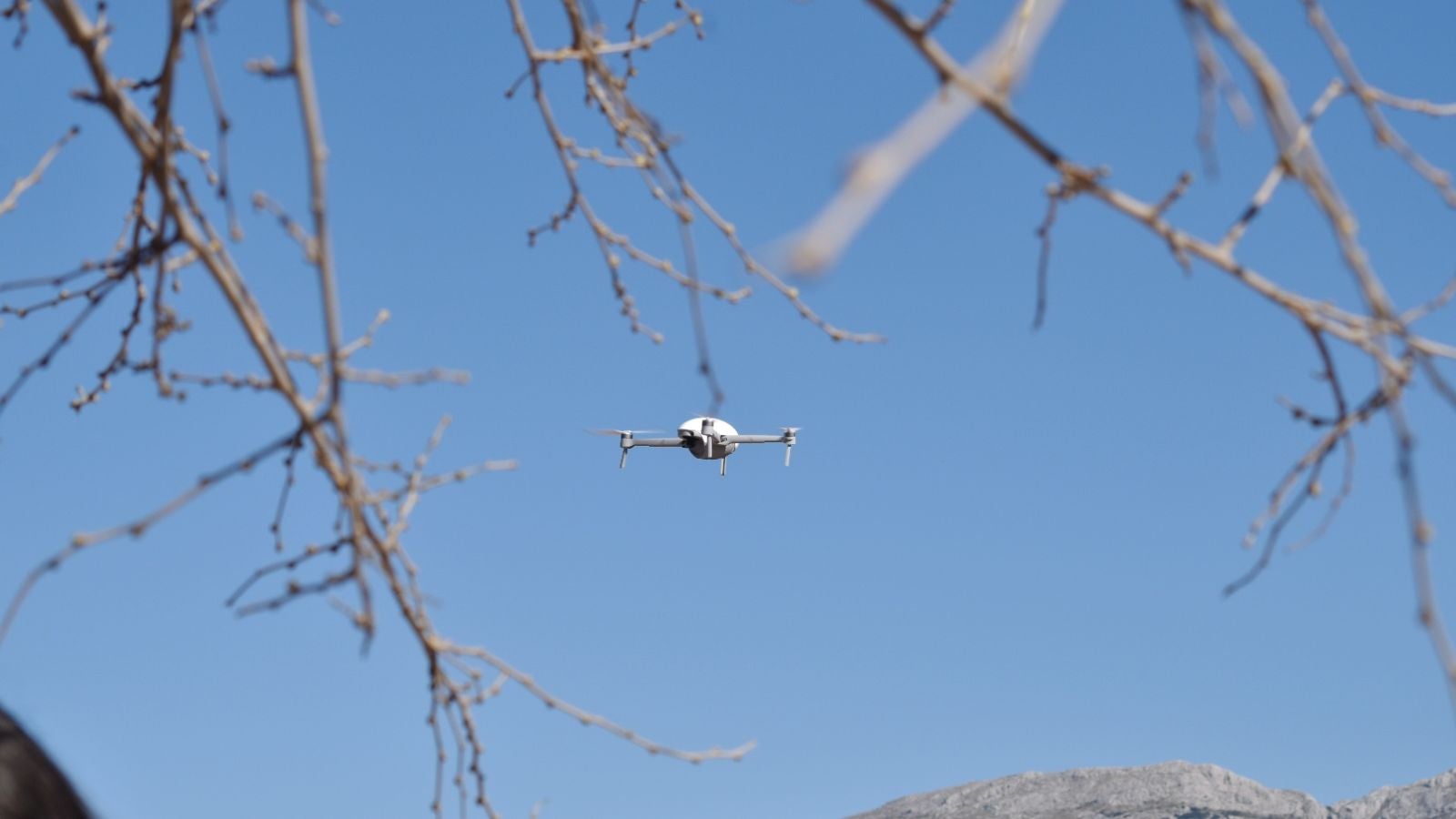 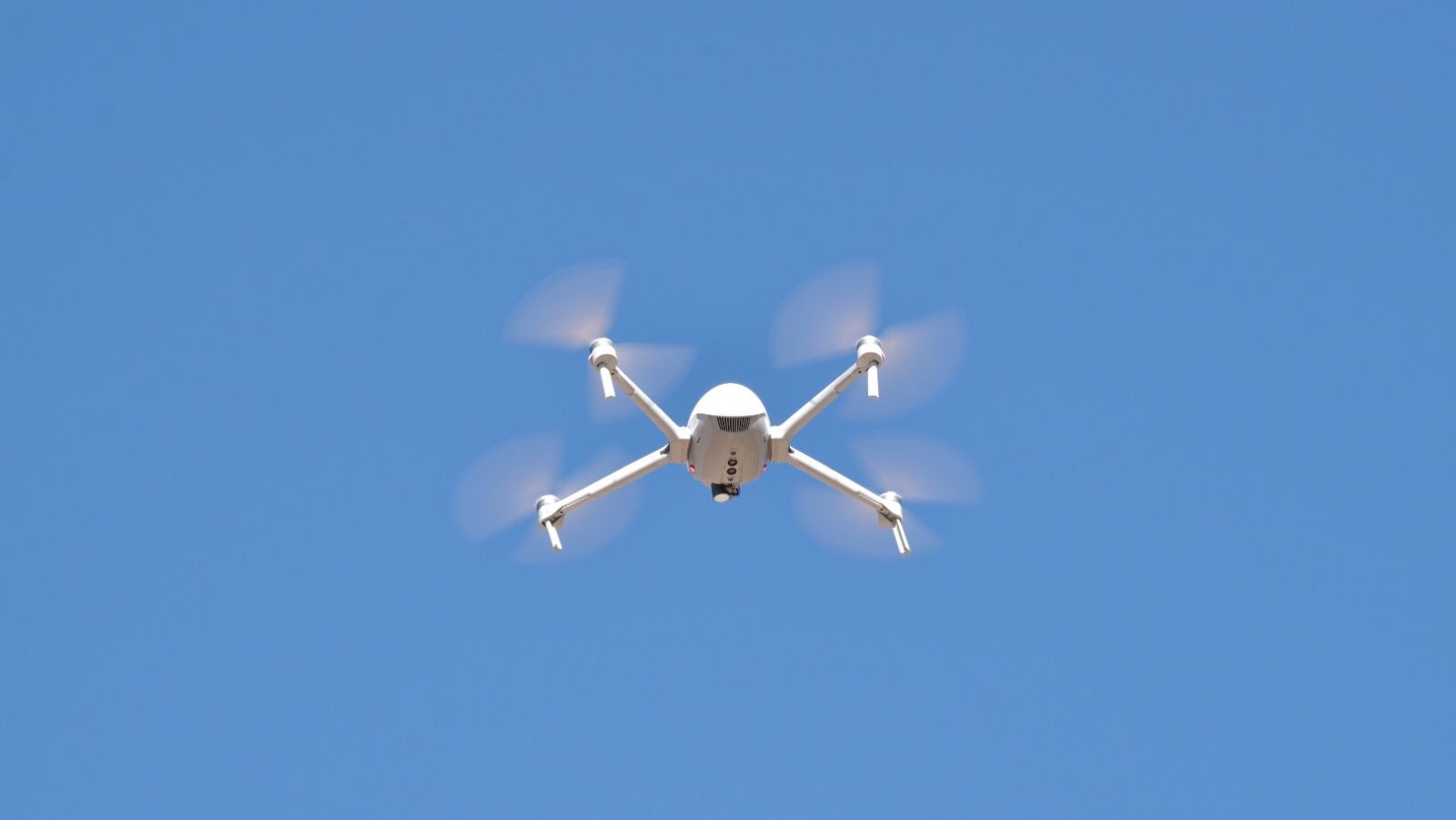 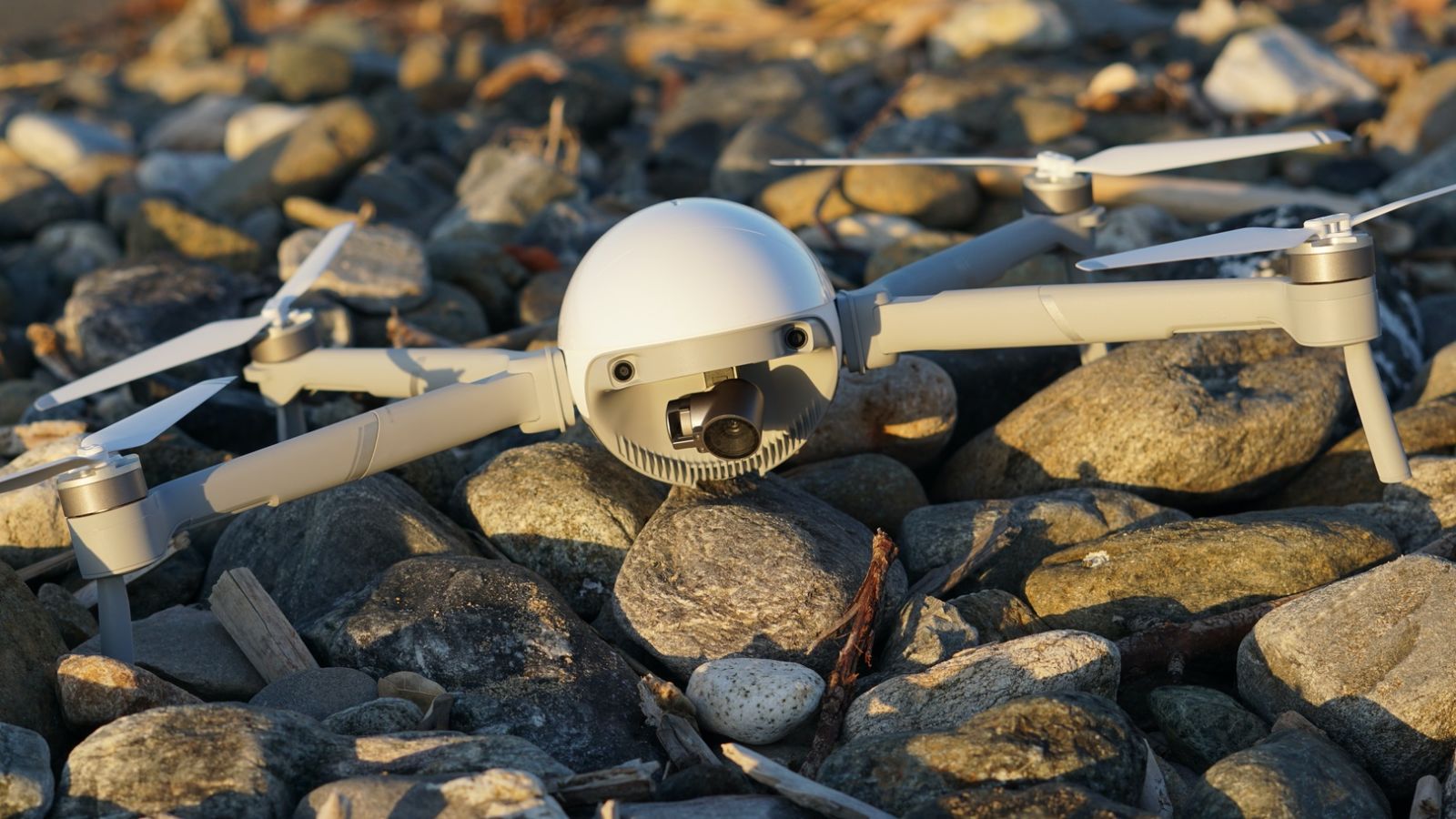 This review originally appeared in Gizmodo en Español. You can read it in Spanish here.