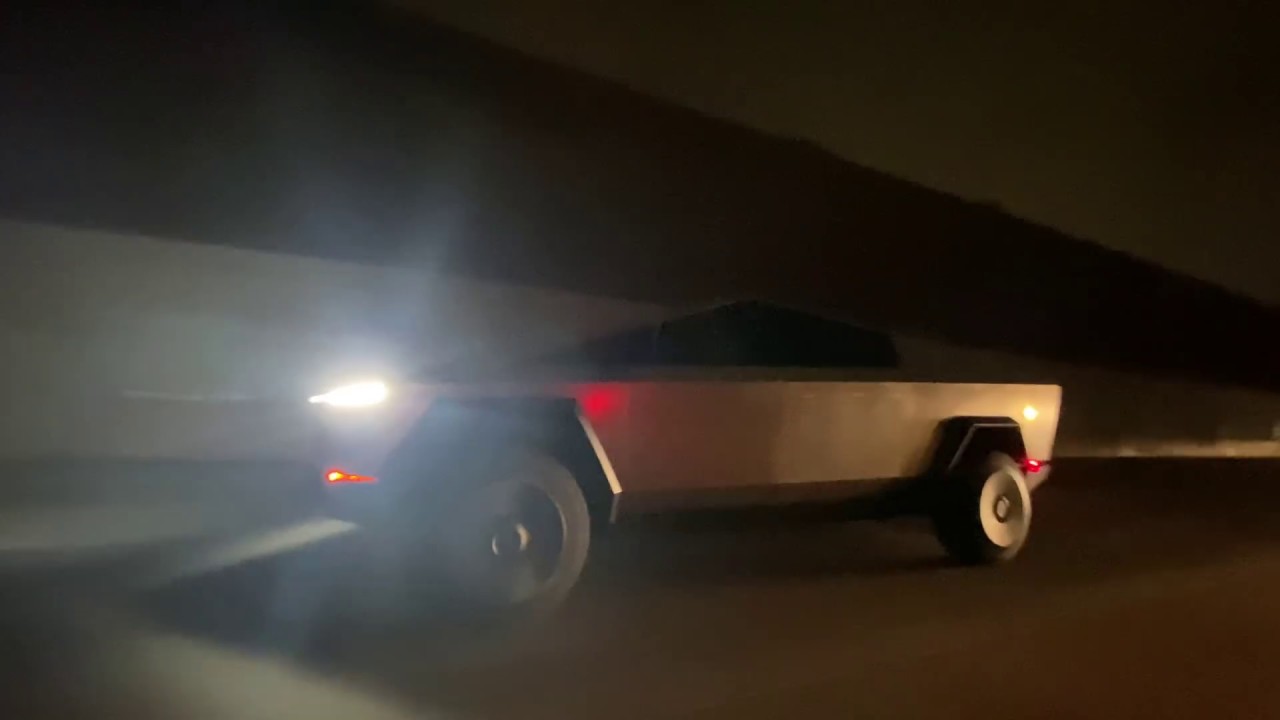 We’ve all seen the peculiarly-designed Tesla Cybertruck on stage and driving on a short course during its debut in November. But if you’ve been wondering what the vehicle looks like on public roads, especially next to standard, run-of-the-mill cars, the answer is: absolutely absurd. Take a look.

Billionaire tech icon Elon Musk turned a lot of heads in Malibu, California on Saturday night when he showed up to a swanky restaurant in his new Tesla Cybertruck. But Musk’s night on the town included at least one embarrassing hiccup. The founder of Tesla and SpaceX hit a traffic pylon with his shiny new vehicle that some Twitter users joked was roughly the height of a small child.

When Elon Musk first showed off the Tesla Cybertruck shortly after the LA Auto Show, the world went into a frenzy that, based on the popularity of every Cybertruck article since, has yet to subside. The extremely angular, stainless-steel body with huge sail pillars and slim lighting is unlike anything we’ve ever seen outside of movies, video games, and one-off design studies. For that reason, I’ve been keen to see more photos of the truck on public roads, surrounded by “normal” cars.

Luckily, in December, a Cybertruck with manufacturer plates hit the streets of LA.

Cybertruck in the wild near LAX pic.twitter.com/E4FW4KCkgS

The photo above shows the truck in traffic, apparently near the Los Angeles International Airport. There’s not a whole lot to surmise from this image, posted to Twitter by codysimms, though you can catch a nice glimpse of the trailer hitch, and you can see how the flat vertical surface on the back compares to the curves of surrounding cars. It looks incredibly wacky. I’m not sure if I mean that in a good or bad way, but based on what I’ve been reading online, I am one of many people who remains undecided on this truck’s design.

The LAX shot wasn’t the only imagery of the Cybertruck on public roads that came out of this weekend. Apparently someone named Roberto Cruz took the footage you see above and uploaded it to YouTube. The truck can be seen cruising down the 405 on December 7 at around 11 P.M., looking rather tank-like. We get a nice shot of the lights in action.

“The cyber tuck loo[k]s better in person,” the caption reads, “it even has dual colour, the silver on bottom and the mat[te] black on top. Love it. Looks more amazing in person.”

Then there was Elon Musk himself out on the town in the Cybertruck. You probably already saw this video taken near the fancy Malibu restaurant, Nobu, as the billionaire running over a traffic pylon has been getting lots of attention today.

Instagram user avvblanc uploaded new footage of the truck, apparently taken near Nobu per the location tag in the Instagram post. As you can read in the caption above, avvblanc thought the truck looked “absolutely massive in person and very quick but still hideous.”

My favourite Cybertruck On The Road footage, though, is actually not from this past weekend, but from last month. Per Teslarati, the photographer shot the footage on Crenshaw Blvd “right in front of the construction of The Millenium apartment near SpaceX headquartersin Hawthorne, CA.” The video is short, but oh so good, in part because of the lighting, and definitely because of the succinct commentary.

What the heck? indeed.