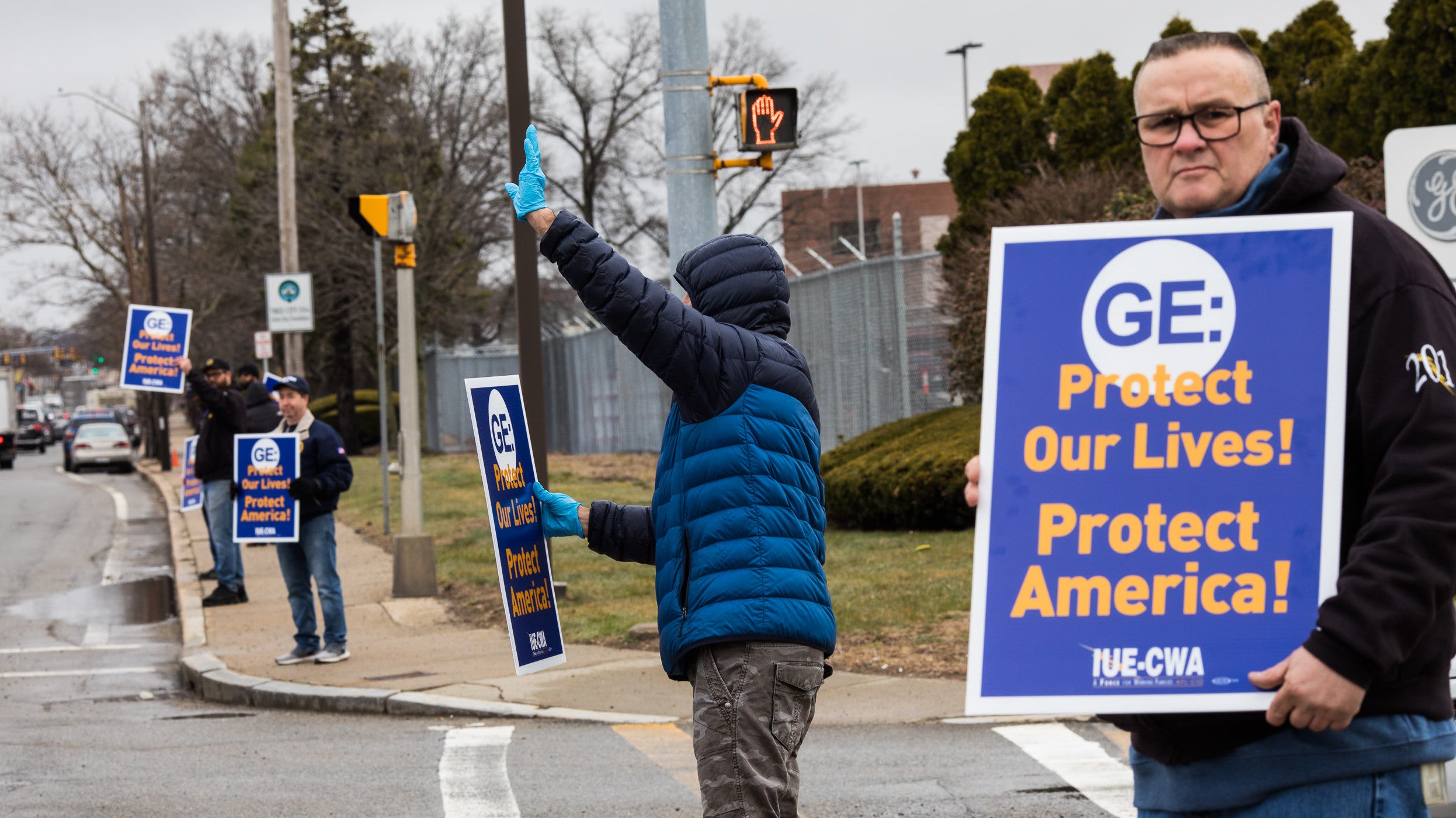 Today, aviation factory workers for General Electric staged two protests in Massachusetts, demanding that the company reconfigure its aircraft manufacturing facilities in order to make ventilators. Last week, General Electric Aviation announced that it would be laying off a large contingent of its workforce, while officials and medical workers have been calling on the federal government to pressure manufacturing companies like GE to step up and produce ventilators as they’re forced to fight over the limited supply.

“The workers are scared about what the future holds because of the layoffs,” a spokesperson for IUE-CWA, the union which represents GE’s aviation workers, told Gizmodo. “Getting the excess capacity at the GE facilities set up for ventilator production would help prevent layoffs and allow the workers to use their skills to help address the COVID-19 crisis by producing much-needed equipment.”

Workers stood six feet apart outside a factory in Lynn, Massachusetts and GE’s Boston headquarters, holding signs facing traffic. (The Lynn site is currently open, though not at capacity.) While GE Healthcare already manufactures respirators–and, according to a press release, has doubled its ventilator production capacity since the covid-19 outbreak–GE Aviation announced that it would lay off 10 per cent of its U.S. workforce (about 2,600 people) and temporarily lay off 50 per cent of its maintenance, repair, and overhaul employees for 90 days.

In a press call this afternoon, various union officials spoke of GE’s vast factory floors, left empty from closures and layoffs in the years and months leading up to the covid-19 outbreak. Jerry Carney, IUE-CWA GE Acting Conference Board Chair, named factories that have closed or laid off the majority of their workers in Texas, Virginia, Kansas, and Kentucky. In Lynn, Massachusetts, he said, a once-20,000-strong workforce has dwindled to little over 1,000 people who work “amid cavernous, empty manufacturing spaces.”

Jake Aguanaga, president of an Arkansas City, Kansas chapter of the IUE-CWA, said that his shop was notified of a layoff of more than 52 per cent of its 653 employees. “This work is right up our alley,” he said, adding that machinists, electricians, programmers, assembly mechanics, testers, and welders are ready and able to work, in a facility which has been rapidly converted in the past, and where the combined empty space equivocates “to several football fields.”

State officials have also been crying out for more production. Governor Cuomo has been pleading with the federal government to send respirators daily, with an anticipated shortage of 40,000 in New York. (So far FEMA and Mike Pence together have supplied less than 5,000.) On Friday, after weeks of appeals from officials, President Trump claimed that he invoked the Defence Production Act, a wartime measure which allows the government to intervene in the manufacture and supply of national defence equipment, in negotiations with General Motors.

Walter Bradford, president of Local 86788 in Dallas, Texas, said today that GE could not only help stem the shortage but save his shop from a proposed permanent closure. “If GE is willing, the company can bring our doomed plant to life.”

GE was unavailable for comment at the time of publication.