Fossil skeletons tell us a great deal about extinct species; we couldn’t piece together ancient life without them. Just as important, however, are the fossils that may not immediately tug at our imaginations, fill us with awe, or even be recognisable to non-paleontologists. The traces that an animal made during its life—footprints, tail drags, nests, burrows, faeces, and vomit—are all examples of ichnofossils. These may not draw museum crowds the way a T. rex skull would, but they reveal behaviour and offer insightful clues into the ancient environment. That we are not only able to discover such things after millions of years but recognise them for what they are is absolutely astounding.

Ichnofossils such as coprolites (fossilised faeces) and fossilised stomach contents have been recognised since the early 1800s. Just like any other endeavour, however, paleontology has evolved over the past 200 years since its inception. Our ability to recognise other types of ichnofossils has increased, and now, scientists are able to determine fossil gastroliths (stones swallowed to help an animal with digestion), gastric pellets (such as the type of regurgitated material one might find from an owl), consumulites (fossilised material from the digestive tract), and regurgitalites (fossil vomit). The list goes on.

In a paper published in Scientific Reports, paleontologists report the first ever coprolites discovered at the La Brea Tar Pits in Los Angeles. Tiny, copious, and resembling modern rodent poop, these fossil faeces were at first thought to be the excrement of present-day rats on museum grounds. After extensive study, however, it was determined that these are the 50,000-year-old remnants of an ancient woodrat of the genus Neotoma. Study co-authors Laura Tewksbury and Karin Rice discovered these coprolites. 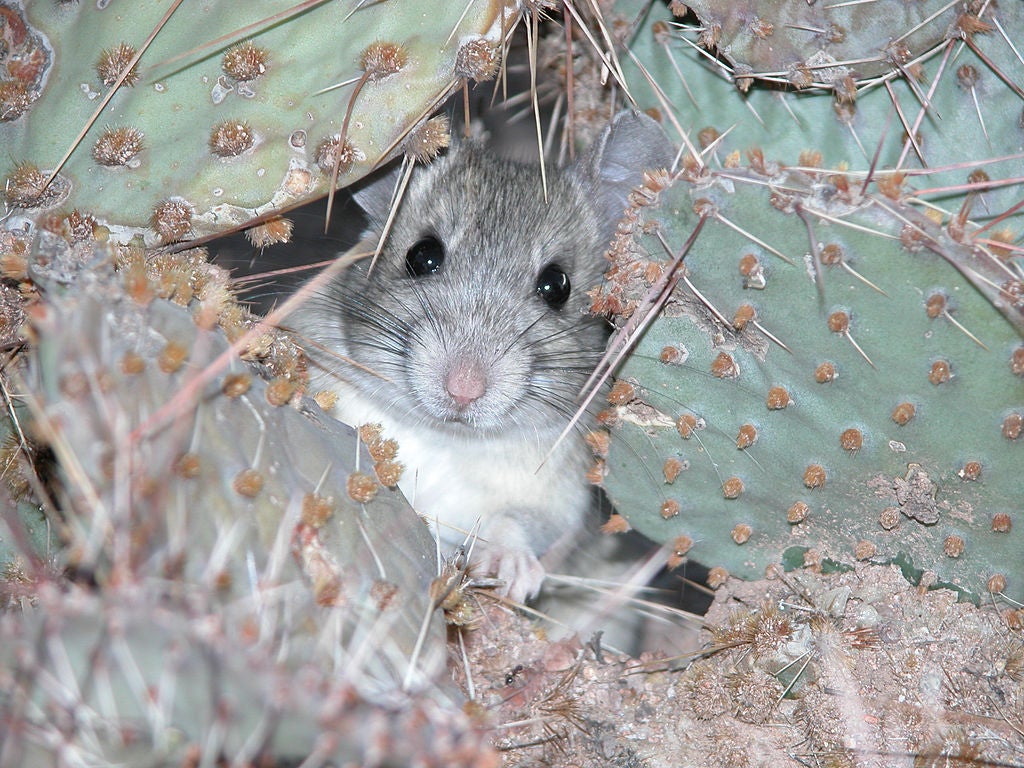 “While the staff working on the excavation and initial bulk preparation of the material had suspicions early that the material might be coprolites, over a century of work at the [La Brea Tar Pits] had never reported such fossils being preserved,” said excavator Laura Tewksbury in an email to Gizmodo. “It wasn’t until hundreds of them were found, from an area where such abundance of contamination simply wasn’t possible, that the hypothesis gained traction.”

So why is this important? In a site known throughout the world for its wealth of impressive fossils, including enormous Columbian mammoths, mastodons, dire wolves, camels, and saber-toothed cats, why is this nest of ancient woodrat poop a significant discovery?

First, these are the only known coprolites to be preserved in what we refer to as a tar pit but which is, in fact, a natural asphalt seep. We now know this preservation is possible. This gives incentive to paleontologists at other such sites throughout the world to look for similar ancient remnants.

Second, these coprolites open a door to the ecosystem of that time period. The research indicates that ancient Neotoma was eating C3 plants, a term that denotes largely woody, grassy flora already known to have been present at the La Brea Tar Pits site. 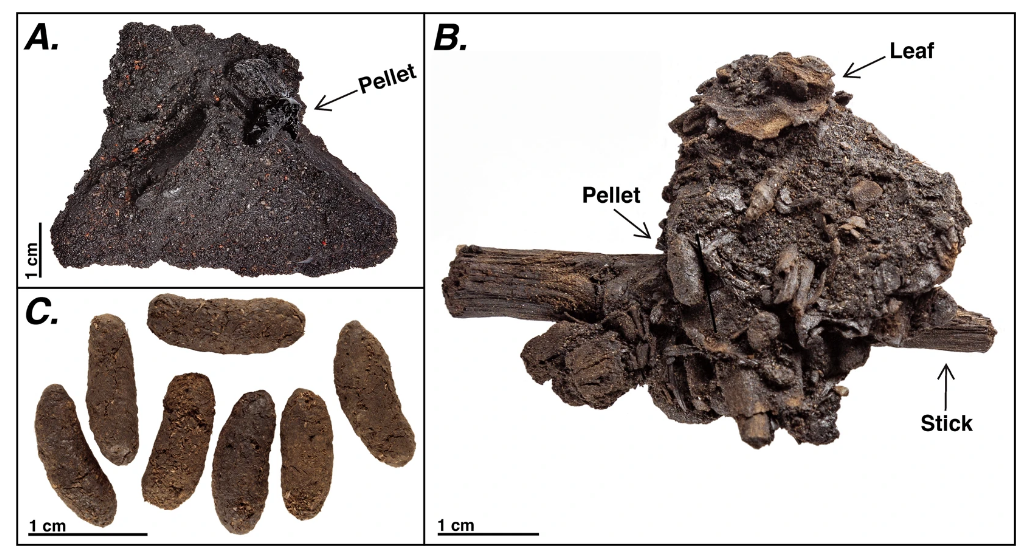 But, as lead author and paleoecologist Alexis Mychajliw explained in an email to Gizmodo, “importantly, the plant macrofossils in the nest represent a single point in time. So, we have an entire community snapshot captured in the nest.”

“For many years at Rancho La Brea, it was like having all the actors (the megafauna) but no stage to place them on (the plants and surrounding ecosystem),” she said. “When you want to study something like a food chain, the most important step is that first rung on the ladder: the plants! And after that comes the primary consumers, like herbivorous rodents. And that’s what this woodrat nest allows us to do: see this interaction between the first and second rungs of the food chain as captured in the faecal pellets. We’ve laid the foundation for understanding the interactions of organisms higher up on the food chain, like the iconic saber-tooth cats, and can better understand how climate change shapes whole ecosystems rather than specific species. We’ve set the stage.”

Moving back in time more than 200 million years, separate research published in the journal Palaios indicates that an enigmatic fossil discovered by Zachary Lavender in 2010 is actually vomit from an ancient reptile. Loaned to the Yale Peabody Museum of Natural History from the Petrified Forest National Park in Arizona where it was found, the fossil was at first thought to be just bone. But fossil preparator and study co-author Brian Roach began to suspect this was not simply a bone fossil as he worked on it. 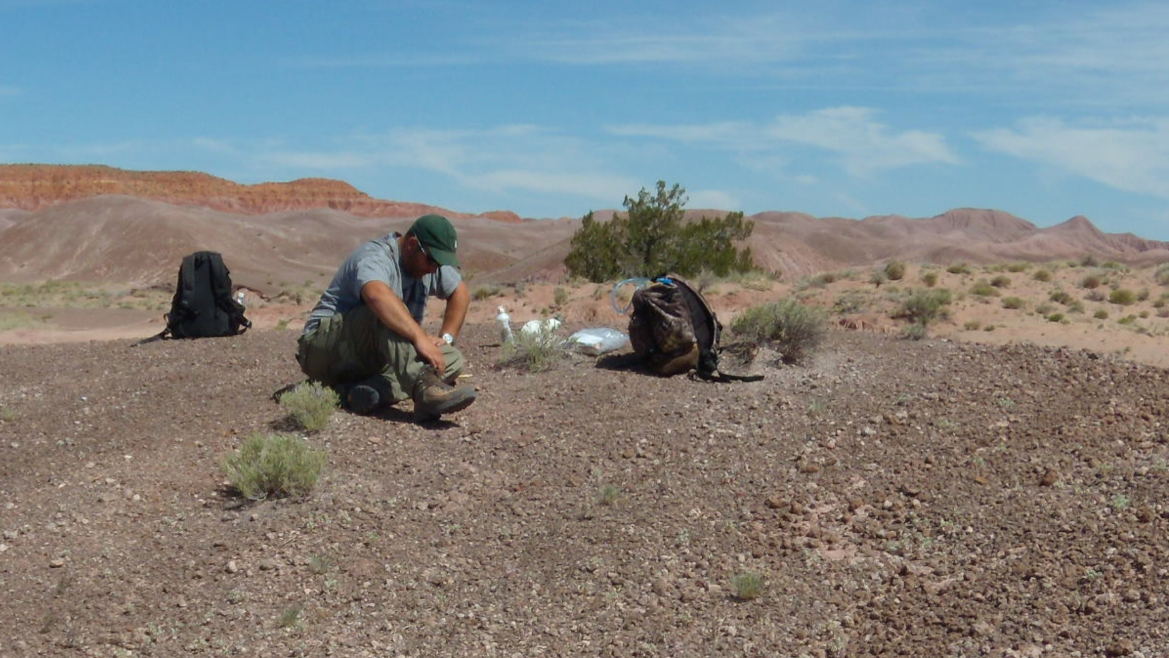 “Fossil preparation is meticulous, time-consuming work,” he wrote in an email to Gizmodo, “and it causes you to look very closely at and ponder the specimen at hand. I began to suspect that the specimen was a regurgitalite while I was preparing it because it was so unusual—the bones were crushed together in discrete lumps that looked like they could not have been the result of the environmental processes that typically sort and concentrate bones before burial.”

But suspecting something is fossil vomit and proving it are two very different things. Unlike bone fossils that have a distinctive and more recognisable shape, things like fossil vomit, faeces, or any digestive residue can take a variety of shapes and sizes. Then consider what processes it went through over millions of years from the moment it left the animal’s body: whether or not it was carried away by water to rest with other bones, how the fossil may have been impacted by pressure over so many geologic time periods, and many other variables. There are so many possibilities to ponder when one is looking at an ichnofossil that the process of defining it is, itself, a study in great detective work.

Paleoecologist Karen Chin, who has done extensive research on coprolites, explained this in a phone conversation with Gizmodo. “I understand the challenges that Caleb Gordon and his co-authors faced when you get this weird specimen and say, ‘OK, the first question I have to answer is: what is it?’ I’ve studied many coprolites and must always carefully describe the evidence that indicates that they are coprolites, even when I’m pretty confident that they are fossil faeces!”

The authors determined that the jumbled mass of bones were those of Revueltosaurus, a pseudosuchian archosaur from the late Triassic, based on the teeth and osteoderms.

“The bones in the specimen are bunched together and aligned in a way that suggests they were packed within the digestive tract,” PhD student and lead author Caleb Gordon wrote in an email to Gizmodo. “Other abiotic factors (like river movement) can also pack bones together, but they tend to sort bones by size or shape, and the bones packed together in [this specimen] are a range of shapes and sizes. This suggests that the bones were clustered by biotic processes.” 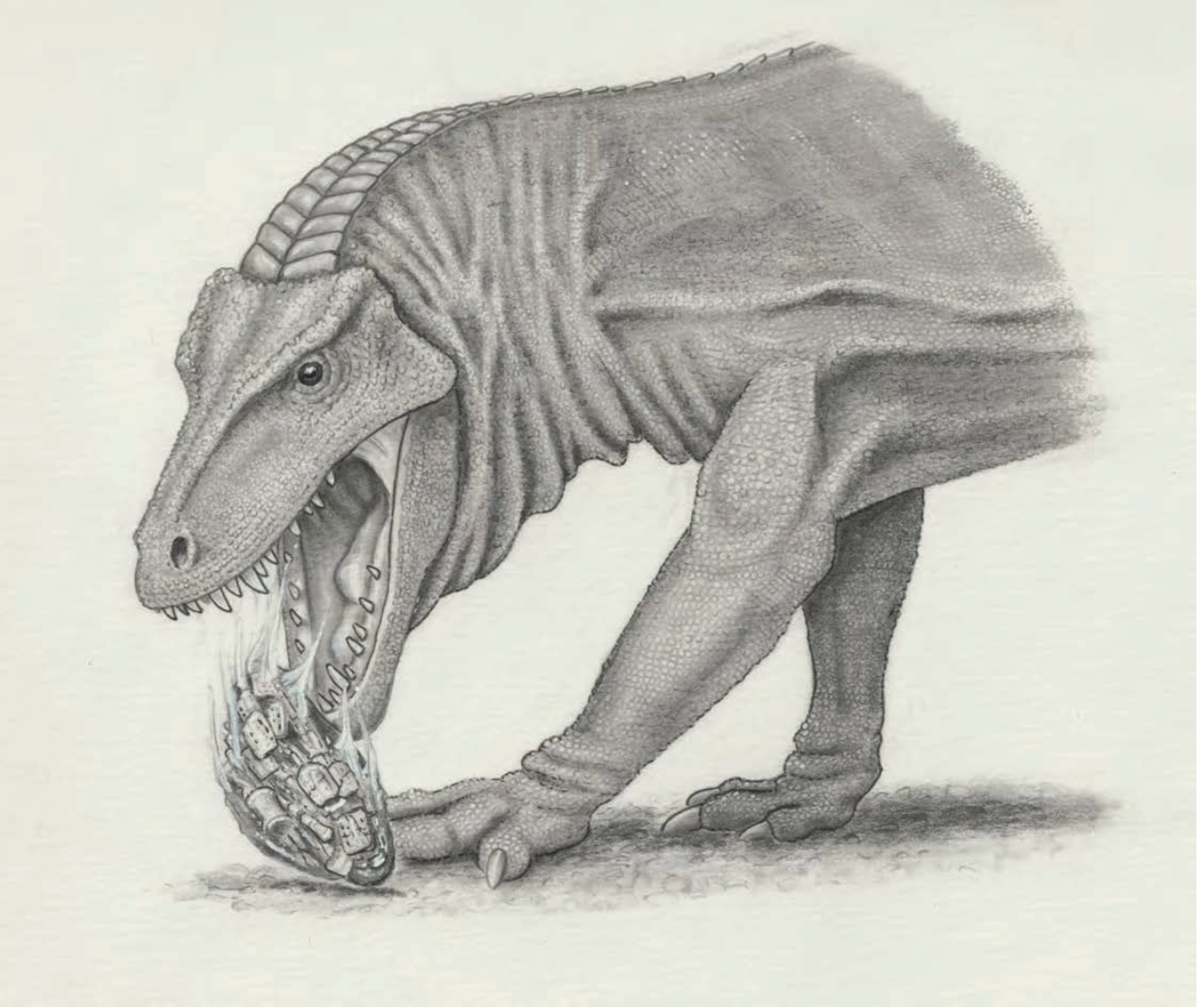 Artist’s imagining of the creature that left behind the regurgitalite. (Illustration: Brian Roach, Palaios)

In a digestive tract at one point it might have been, but because skeletal fossils from a carnivore were not found nearby, they concluded it couldn’t have just been fossilised material from within a digestive tract. This meant the specimen was either a coprolite or a regurgitalite. But how to determine which one?

The large size of Revueltosaurus bone chunks indicates large bites from a substantial animal, such as a phytosaur, a temnospondyl, or a rauisuchid, predatory species known from that area and time period. If ancient species follow their extant counterparts, the bones in this specimen might indicate fossil vomit—throwing up those parts of the food it cannot digest.

“A lot of animals use a special behaviour, called ‘routine emesis,’ to remove indigestible or undesirable parts of their meals, like bones or fur… [This includes] birds, crocodiles, lizards—even some fish and sea lions! Based on where these living animals are on a phylogenetic tree, we would predict that a lot of extinct groups, like the ancestors of modern crocodiles, also produced gastric pellets,” Gordon said.

Other indications that the specimen was not faeces: It didn’t conform to any known shape of a coprolite; coprolites from carnivores are known to contain a lot of phosphate, whereas this specimen is low on phosphate; the bones in this specimen did not have any tell-tale etching from stomach acid; and muscle tissue survived, which indicates it did not move completely through an animal’s digestive system.

“[W]e found phosphatized muscle fibres under the scanning electron microscope. This thing is over 200 million years old, and the preservation was incredible—you could see the remnants of myofibrils. It was like a little window into the physiology of this [Revueltosaurus],” wrote Gordon.

You can almost hear Gordon’s excitement through his email: “This specimen, and the Chinle Formation [from which it came] in general, give us a snapshot of a time when theropod dinosaurs hid in the shadows of pseudosuchians, and the galloping ancestors of crocodiles ruled the world.”

Mychajliw and colleagues infuse their research with humour. Whether referring to their project as “who pooped in that box!?” or explaining that one of the most exciting aspects of this research was being “able to metal coat 50,000-year-old rodent faecal pellets for science and now they are glittery purple little gems,” Mychajliw wants to remind “people that science is fun, and we can do important scientific research while keeping a sense of humour.”

Chin mused, “I remember talking with Anthony Martin once, who suggested that trace fossils were the Rodney Dangerfields of paleontology. And within trace fossils, I think coprolites are kind of down at the bottom anyway! I think there is still a natural bias from the public and some paleontologists in thinking that trace fossils are not very informative or important in contributing to our understanding of the past. But I think that bias is less pronounced these days, in that there are far more people that now appreciate that we need to take a more balanced look at a variety of fossils to understand ancient ecosystems.”

But what about the average person, reading about this for the first time, who might just think, “GROSS”?

The aforementioned Anthony Martin, ichnologist and professor at Emory University, has written a number of popular books on ichnofossils. He told Gizmodo: “It’s understandable that some people might think of vomit or faeces as ‘gross,’ because we associate those functions in humans with bad sights, sounds, and smells. But every animal has to eat, so puking and pooping has also been a part of everyday life for more than 500 million years, from ocean depths to mountain tops, and from pole to pole. So once we suppress our disgust and allow in wonder, we can learn so much about what animals were eating from long ago.”

“I hope the average person realises that these sort of trace fossils—however unappetising they might seem—give us important snapshots of what animals were eating thousands or millions of years ago,” Martin said. “Instead of thinking, ‘Ew, gross,’ think of these more as these animals sending you ‘meal selfies’ from the past!”