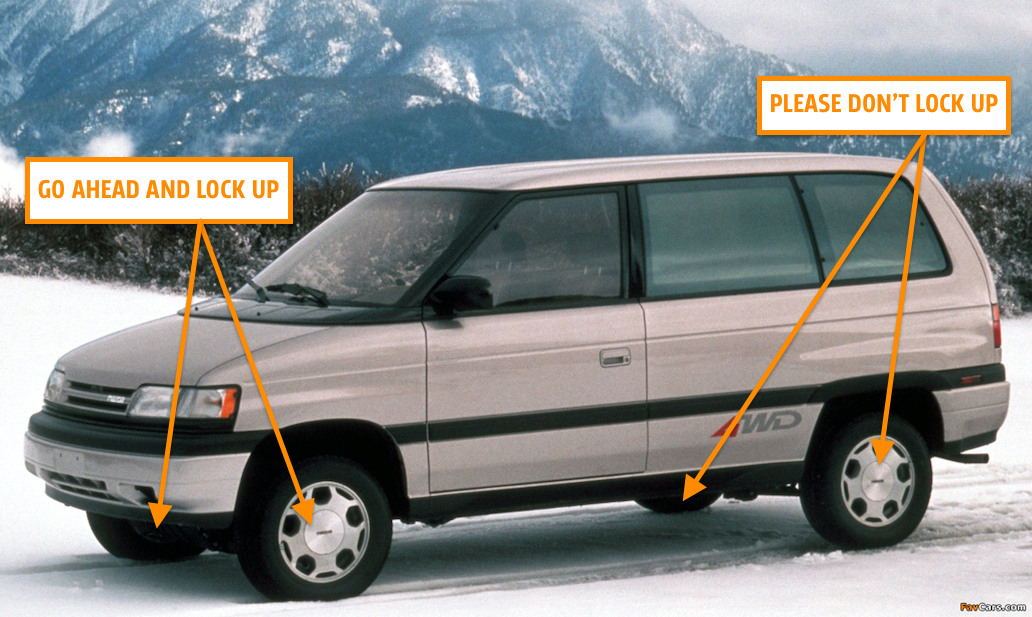 Every car in the U.S. after 2011 has had to be equipped with electronic stability control thanks to Federal Motor Vehicle Safety Standard 126. This means they all have four-wheel antilock brakes. But not too long ago, many cars had no ABS at all; More interesting, though, is an intermediate phase between those two periods—a phase in which vehicles had rear-only ABS. Yes, that was a thing.

It’s a bit baffling to me, since one of the main advantages of ABS is the ability to maintain steering under braking, as this (strangely robotic) YouTube video from Bosch India explains:

I mention this only because, after writing about the holy grail of GM minivans—the manual transmission, Quad 4-equipped Pontiac Trans Sport—I received an email from someone named Kaz, who wanted to tell me about how amazing early 1990s Mazda MPVs were. That’s his van below.

Kaz is totally right, by the way, which is why my coworker Andrew wrote a whole story on these incredible off-road vans. These MPVs had locking centre differentials and skid plates, which is pretty incredible. 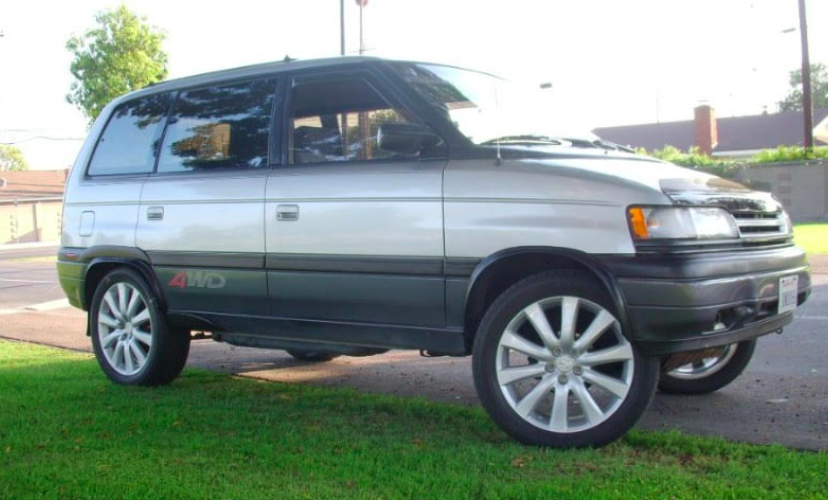 This email sent me down what the kids are calling a “rabbit hole,” and now I know more about early 1990s, manual transmission 4x4 Mazda MPVs than I’ve ever wanted to. This deep dive into the MPV brought me to one of the most 1990s commercials I’ve ever seen:

“Its V6 engine and rear anti-lock brakes let you handle even the worst weather with confidence,” the narrator says before we learn that a team of unconfident children won a game not because of talent, but because the other team forfeited. 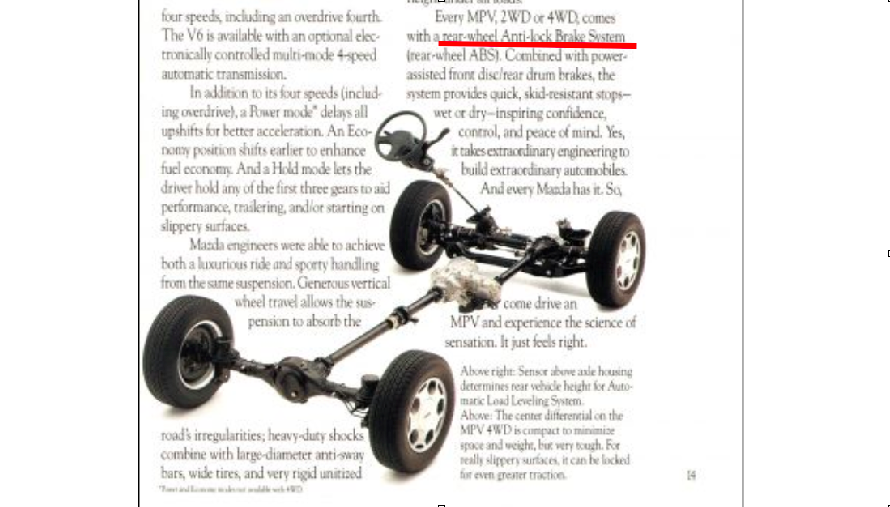 I’m sure the old-timers among you, and some of the young-timers, think I’m a child for not knowing about the existence of rear-only anti-lock brakes. But I’m sure I’m not the only ignorant person out there, so let’s talk about this weird system.

It’s known as a “one-channel” braking system, and it’s as simple as it gets. As the Clemson University Vehicular Electronics Laboratory writes on its website, this setup uses “One valve and speed sensor located on the rear axle [to] monitor both the rear wheels. This type of ABS is commonly seen in pickup trucks.”

Pretty straightforward. There’s a single valve that shuts off pressure to both rear brakes based on input from a single speed sensor in the rear axle or possibly in the transmission or transfer case. Plus there’s a pump to build pressure, and a computer to control it all. Very simple and very cheap.

Interestingly, the Chicago Tribune once wrote a story called “Different Way To Brake With Rear ABS,” a story that I bet probably hasn’t seen its readership increase much over the years. Here’s what Jim Mateja wrote back in 1998:

Pickups often have rear-wheel ABS only to keep the lighter rear end from swinging around in panic braking. Initially, when trucks started offering ABS, the producers relied on rear-wheel only, in part because it didn’t cost them as much as four-wheel ABS. But by last year, more than 60 per cent of the trucks with ABS offer the four-wheel version.﻿

Apparently, these kinds of setups have been around quite a while, and not just on trucks and vans. Road & Track mentioned some early 1970s anti-skid systems from Chrysler, Ford, and GM in its story on the 40th anniversary of ABS:

Ford replied [to Chrysler’s 1971 Imperial] with “Sure-Track”, adding it only the rear wheels of its Lincoln Continentals. GM did the same for 1972, with the rear-only “Trackmaster” available on Cadillacs and Oldsmobile Tornados.

So it seems that expensive cars had rear-only ABS systems in the 1970s, but by the 1990s, those cars got four-wheel ABS and rear-wheel ABS was limited to mostly trucks and vans, presumably because those vehicles see a lot of rear-end weight changes as they’re loaded up. I assume this variance in weight over the rear axle makes it tricky to engage in “threshold braking” (pressing the pedal so that the wheels are just on the threshold of locking up) and to maximizing stopping capability of both axles without locking up one of them.

Mazda, in its 1991 brochure, advertises its rear-wheel Anti-lock Brake System by saying it offers “straighter, more controlled stops.” That sounds right. With no ABS up front, I can imagine it’s a pretty damn straight stop, as you wont’ be doing much turning once those fronts lock. Still, I can see how preventing the rears from locking up, especially when the vehicle is unloaded, can keep the tail from swinging around and the driver from losing control.

It’s a weird intermediate step in braking technology, and I can’t say I’ve ever driven a car with it. If you have, feel free to tell me what that’s like.