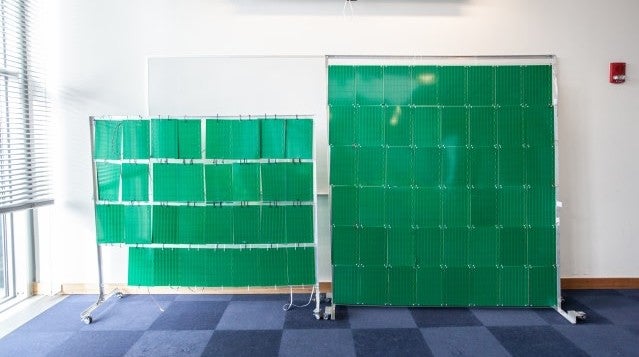 Faster wireless speeds are on the way, but getting good signal strength in offices and homes is still a problem. To help address that problem, researchers at MIT’s Computer Science and Artificial Intelligence Laboratory (CSAIL) have developed a type of “smart surface” that it says can boost a phone’s signal strength by 1,000 per cent.

The issue, according to MIT, is that faster internet speeds won’t become a reality unless there’s a more efficient way of delivering wireless signals. While most companies are tackling that issue by adding more antennas to transmitters or receivers, reducing their size has been a problem as technology evolves. It’s especially problematic in large spaces like warehouses, which may contain hundreds of sensors to keep track of inventory and machines. Scaling up connectivity for those types of environments using current methods is incredibly expensive and power-intensive.

Which is where this green, seaweed-esque wall comes in. CSAIL’s idea was instead of adding transmitters and receivers, wireless signals can be amplified by adding the antennas to external surfaces—like a wall. Dubbed RFocus, the “smart surface” packs in more than 3,000 antennas, costs pennies, and can supposedly improve signal strength by “a factor of almost 10.” The two-dimensional surface can both let signals through, or reflect them based on how the software controlling it is programmed.

“The core goal here was to explore whether we can use elements in the environment and arrange them to direct the signal in a way that we can actually control,” says Hari Balakrishnan, an MIT professor who is also a senior author on a new paper about RFocus, in a statement.

MIT isn’t the first to ponder the idea of using external environments to boost internet speeds. The University of Princeton published a similar idea in 2018, but MIT says its approach is much more focused on lowering cost and applying it to more use cases.

In any case, it’d be pretty neat—and it seems cost-effective. But hopefully, if this ever hits the market, they’ll figure out a less noticeable colour scheme.