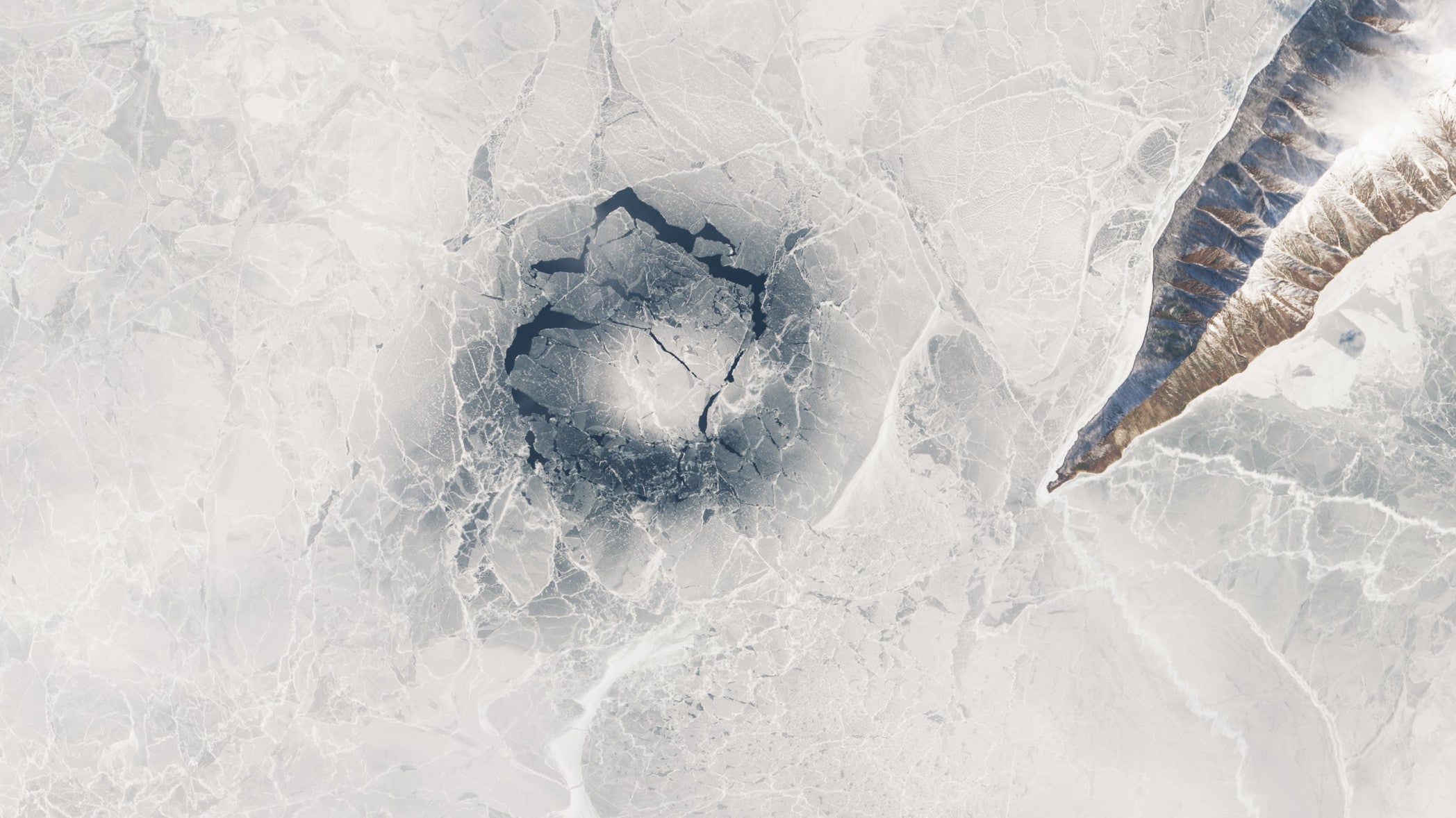 An ice ring measuring around 3 kilometres wide on Lake Baikal, as seen on April 1, 2016. (Image: MODIS/NASA)

The appearance of large ice rings on Lake Baikal in southern Siberia has confounded scientists since they were first discovered in the early 2000s. Recent investigations into the ice rings have resulted in a plausible explanation, but there’s still much to learn about these unusual features.

Russia’s Lake Baikal is the world’s largest and deepest freshwater lake. It’s home to many varieties of fish not seen anywhere else in the world, and even an endemic freshwater seal population. And it also features strange ice rings, which were first spotted in the early 2000s through MODIS satellite imagery.

Research published late last year in Limnology and Oceanography posits a plausible explanation for strange ice rings that frequently appear on Lake Baikal during the winter months: the circular movement of warm water beneath the ice.

The overall shape of an ice ring isn’t really discernable to an observer on the ground. They’re sufficiently large enough that their ring-like shape can only be seen from planes and satellites. The interior portions of the circles are bright, while the outer perimeters are dark where the ice is thin. The rings tend to be around 5 to 7 kilometres in diameter, while the dark, outer perimeter itself is around 1 kilometre wide, according to the new research. The rings last anywhere from a few days to a few months during the Siberian winter. 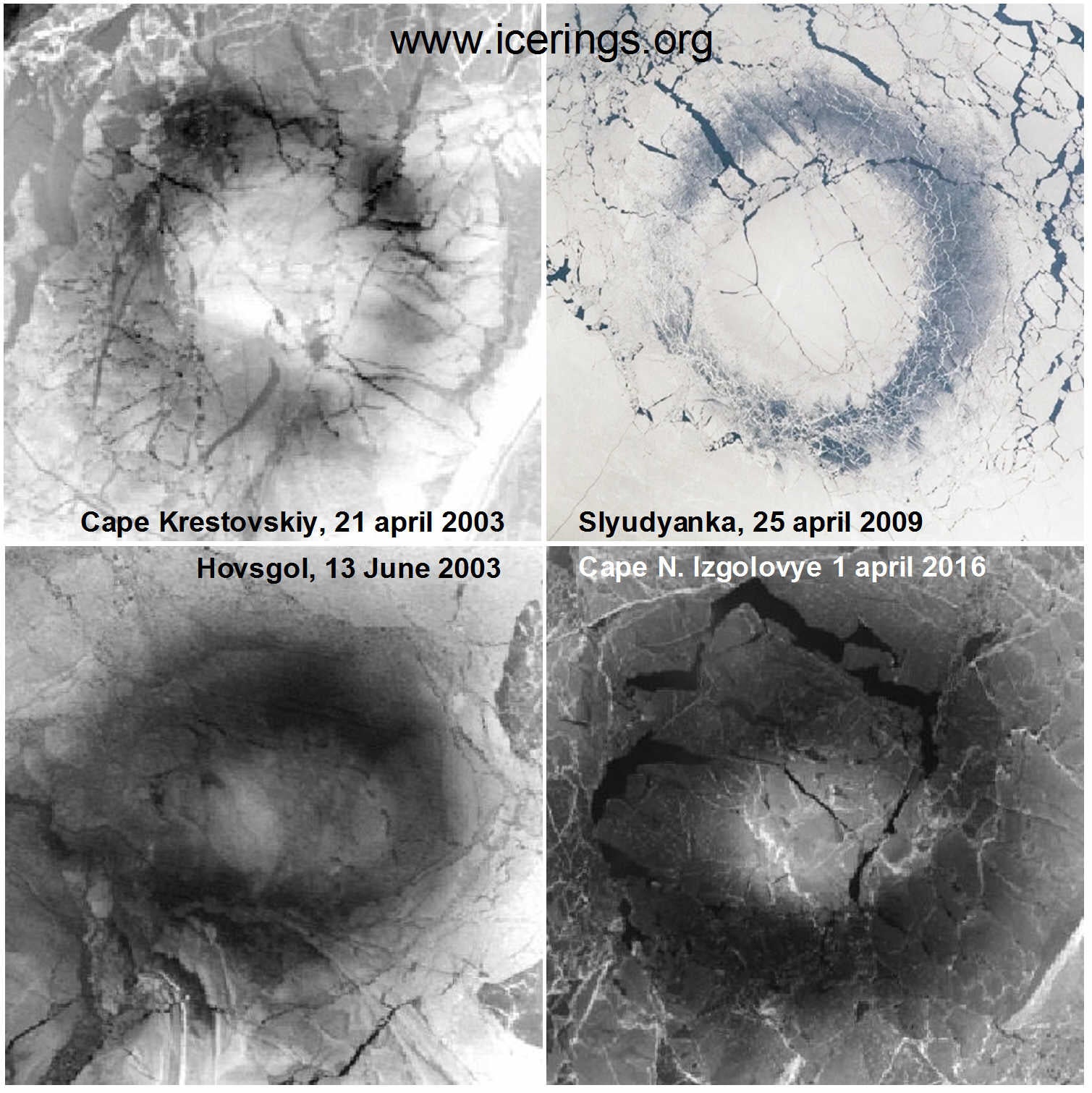 Ice rings like this seem to be exclusive to Lake Baikal and neighbouring Lake Hovsgol in Mongolia as well as Lake Teletskoye, another Russian lake about 1,335 kilometres west of Baikal. But it’s entirely possible that they exist on other lakes and just haven’t been observed yet. Their appearance tends to be unpredictable, both in terms of time and place.

The ice rings have been attributed to numerous causes, including atmospheric or biological effects, elaborate hoaxes, and even the activities of aliens. A popular theory suggests the ice rings form from leaking gas, namely methane, which bubbles up from the bottom of the lake. The rings, however, have been observed in shallow parts of the lake where gas leakages are unlikely.

To get to the bottom of this mystery, the authors of the new study—a collaborative team from France, Russia, and Mongolia—organised field expeditions to Lake Baikal during the winters of 2016 and 2017, and studied thermal infrared satellite imagery of the ice rings.

The team drilled holes near the ice rings, into which they dropped sensors that could measure water temperature at depths reaching 200 meters (660 feet). Measurements were taken twice each winter, once in February and then again in March.

This proved to be hazardous work. On March 16, 2016, the ice layer began to crumble beneath their van, requiring the driver and passengers to be rescued. It happened again just two days later.

Left: a vehicle trapped in ice along the eastern boundary of a ring. Right: a researcher exploring a ring on foot. (Image: A. Beketov/A. Sukenv/www.icerings.org)

In February 2016, the researchers, who refer to themselves as The Fellowship of the Ice Rings, detected an eddy—where water moves in a circular motion—at a depth of 45 metres beneath an ice ring. This discovery provided the team with a firsthand look at the ice conditions during the late stage of ice ring formation. The water in the eddy was found to be around 1 to 2 degrees Celsius warmer than the water around it, and it took about 3 days for the eddy to make a complete rotation.

A year later the team found another eddy, which migrated 6 kilometres from its original position by the end of March. No ice ring was seen above the eddy, likely because not enough time had elapsed for a ring to form above it. A similar thing was spotted in 2019, when a ring moved 9 kilometres from its initial position. The findings have led the researchers to believe the warm eddies are the primary cause of the ice rings.

“Results of our field surveys show that before and during ice ring manifestation, there are warm eddies that circulate in a clockwise direction under the ice cover,” Alexei Kouraev, a team member and hydrologist from the University of Toulouse, said in a recent NASA Earth Observatory post. “In the eddy centre, the ice does not melt—even though the water is warm—because the currents are weak. But on the eddy boundary, the currents are stronger and warmer water leads to rapid melting.” 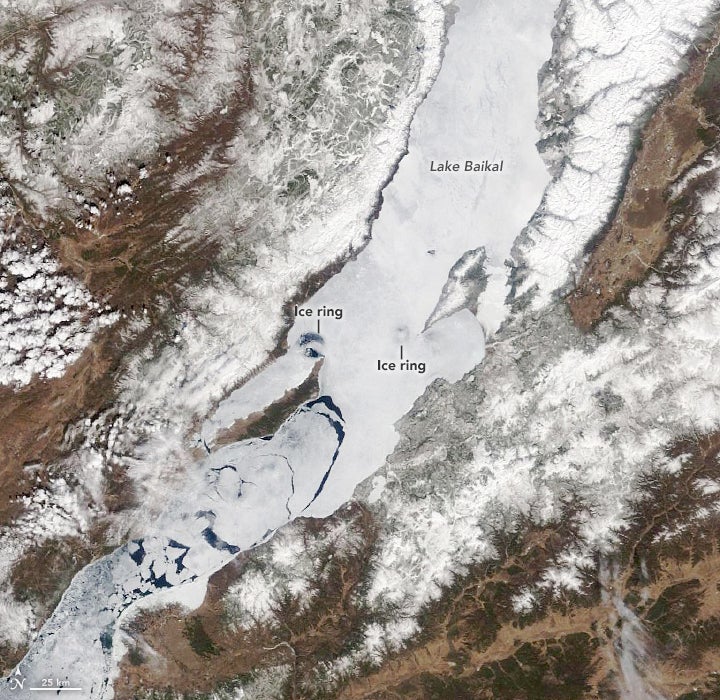 Ice ring development, according to the new research, begins in autumn before the lake is frozen. The eddies are formed from wind-churned outflows of water from the Barguzin Bay to the lake’s middle region. The scientists suspect a similar process is happening in other lakes where ice rings form.

More research will be required to fully elucidate the cause of these ice rings, but this latest study offers an exciting explanation. That said, many mysteries remain, such as why the eddies have a convex shape—a feature that’s typically seen in ocean eddies but not in lakes. Future research will also have to take the shape of the coastline into consideration, as that seems to play an important role in affecting how the eddies move.

In terms of other findings, the scientists found satellite photos of the ice rings that dated back to the 1960s, so these structures aren’t a new phenomenon. Even if they been around for a while, they still show that Lake Baikal continues to be one of the coolest places on the planet. Hopefully we’ll learn more about these enigmatic ice rings soon—and not just for the science. Local residents often drive on the lake during the winter months, and these ice rings pose a real risk to vehicles. Perhaps future traffic reports will highlight the presence of dangerous ice rings and their associated thin ice.