This VR Massage Chair Will ‘Esqape’ With Your Life Savings 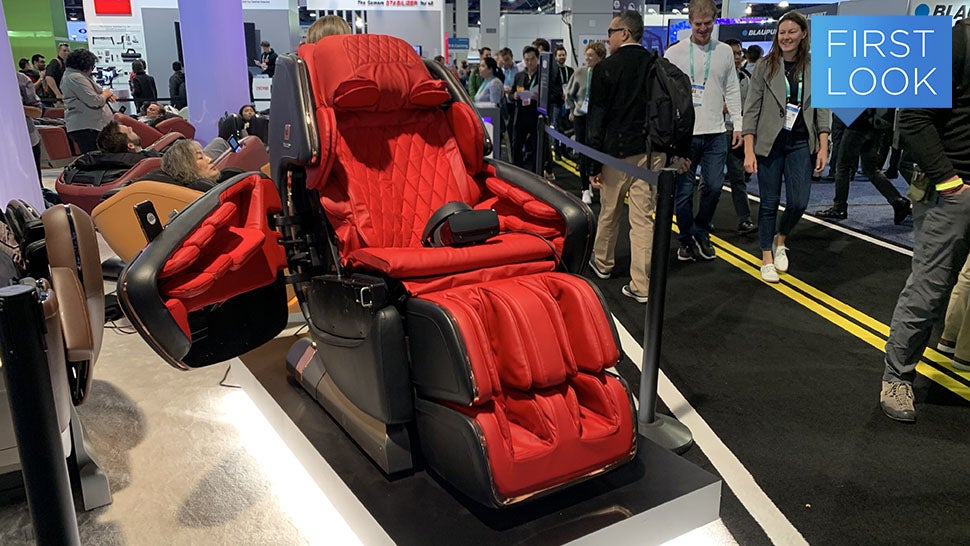 Massage chairs at CES are a staple. Every year, you can spot a half dozen massage chair makers scattered across the show floor. For the most part, they’re your average massage chair. Every once in a while, they look like Optimus Prime. And sometimes, they come with an Oculus headset.


I stumbled across OHCO in my pre-CES nightmare inbox. It had an intriguing subject line. It read, “‘Esqape’ From CES: World’s 1st VR Massage Experience.” Truly, it had me at the ‘esqape’ bit because at some point during the show, I start to get loopy from the long hours and tired feet. I wasn’t sure what a VR massage chair would entail—would it be, like, a video game that you play while the chair does its thing? Or maybe it would be like a virtual entertainment centre where you could zone out and watch your TV shows? Turns out, neither.

The chair itself is called the OHCO M.8 With Esqapes. The OHCO M.8 is the chair, while Esqapes is an LA-based wellness centre that specialises in VR. Together, they created this concept experience where you can zone out in relaxing waterfronts as a shiatsu massage chair works on your tired, aching bones. I was bone-tired, despite it only being 10:30 am and decided, why the hell not?

The chair itself is disturbingly red, which I found slightly odd. Red is not a historically relaxing colour. Usually, massage chairs look like jacked-up La-Z-Boy recliners. This one… more or less looked like the type of massage chair I’d imagine Darth Vader would use. Or, you know, like an emo race car. The latter isn’t too far off. The chair itself was designed by Ken Okuyama, who’s also worked on the Ferrari Enzo and Maserati Birdcage.

At my demo, the simple act of strapping on an Oculus headset while climbing into an extremely extra massage chair turned heads. Even though I had headphones on, I could still hear the occasional industry attendee go, “Oh, look at the VR!” or “What’s that? Is that a VR?” in the background. But whatever. Settled back in the emo recliner, I was prompted to breathe in and out while staring at floating dots of light. At that point, the massage chair tilted back and its weird, mechanical body proceed to ignore every single physical boundary I thought I ever had with technology. You can kinda see the chair eating my leg. Also, I’d make fun of me if I saw me. (Photo: Victoria Song, Gizmodo)

On the one hand, I could hear a nice ocean breeze while staring out at a slightly pixelated video-game version of a Meditteranean vista at sunset. If I looked down, I could see the legs of an empty massage chair. Weird. The chair itself did the whole ‘massage’ thing. At times, it felt good, like when it rolled out my poor, hunched shoulders. And then it would do something unsettling like, squeeze the living daylights out of my right calf or push rollers up into my buttcheeks.

I suppose the object of the whole thing was to feel immersed in these tranquil scenes of elegant waterfronts. I never could get 100 per cent out of my head though. Even beautiful landscapes in VR still have that uncanny valley, video game look. That, combined with being able to hear random people who were gawping at me, took me out of the immersion aspect. The other part was my leg. That chair really tried to squeeze all life out of my right calf, to the point where I wondered if the chair was trying to eat me alive.

Esqapes’s founder Micah Jackson told me that the experience was a bit more immersive at Esqape boutiques. There are heat lamps, for example, which warm your feet depending on what virtual world you’re in. Like, if you’re watching the sunset by a swimming pool in Morocco, and the sun is shining on your legs, the lamps will mimic that feeling. You might also smell some Moroccan spices via aromatherapy. You might feel the wind or something if the virtual world has a nice breeze.

Maybe some pleasant smells and heat lamps would have helped me ‘esqape’ more effectively from the Las Vegas Convention Centre. But nothing grounds you back down into reality more than hearing the price on one of these things. The regular M.8 chairs cost around $US11,000 ($16,007), while the concept model I tried is about $US15,000 ($21,828). Jackson noted that he’s working on licensing Esqapes’s tech, that along with the chair, is something around $US25,000 ($36,380) for businesses.