How to Make It Easier to Control Smart Home Devices From...

I love Fiona Shaw, but if she started touching my baby belly like that I'd be creeped out too. (Image: IFC Midnight)

In the First Trailer for Kindred, a Pregnant Woman Is Trapped...

The crew spends a suitably silly amount of time admiring the Cerritos from afar. (Image: CBS)

Don’t Be Afraid of All the New Sci-Fi, Fantasy, and Horror Books Coming in October

Vodafone’s SIM-Only Plans Will Give You a Heap of Data For...

These Two Lovely Rear-Engined Prototypes From 1962 Are Bizarrely Similar 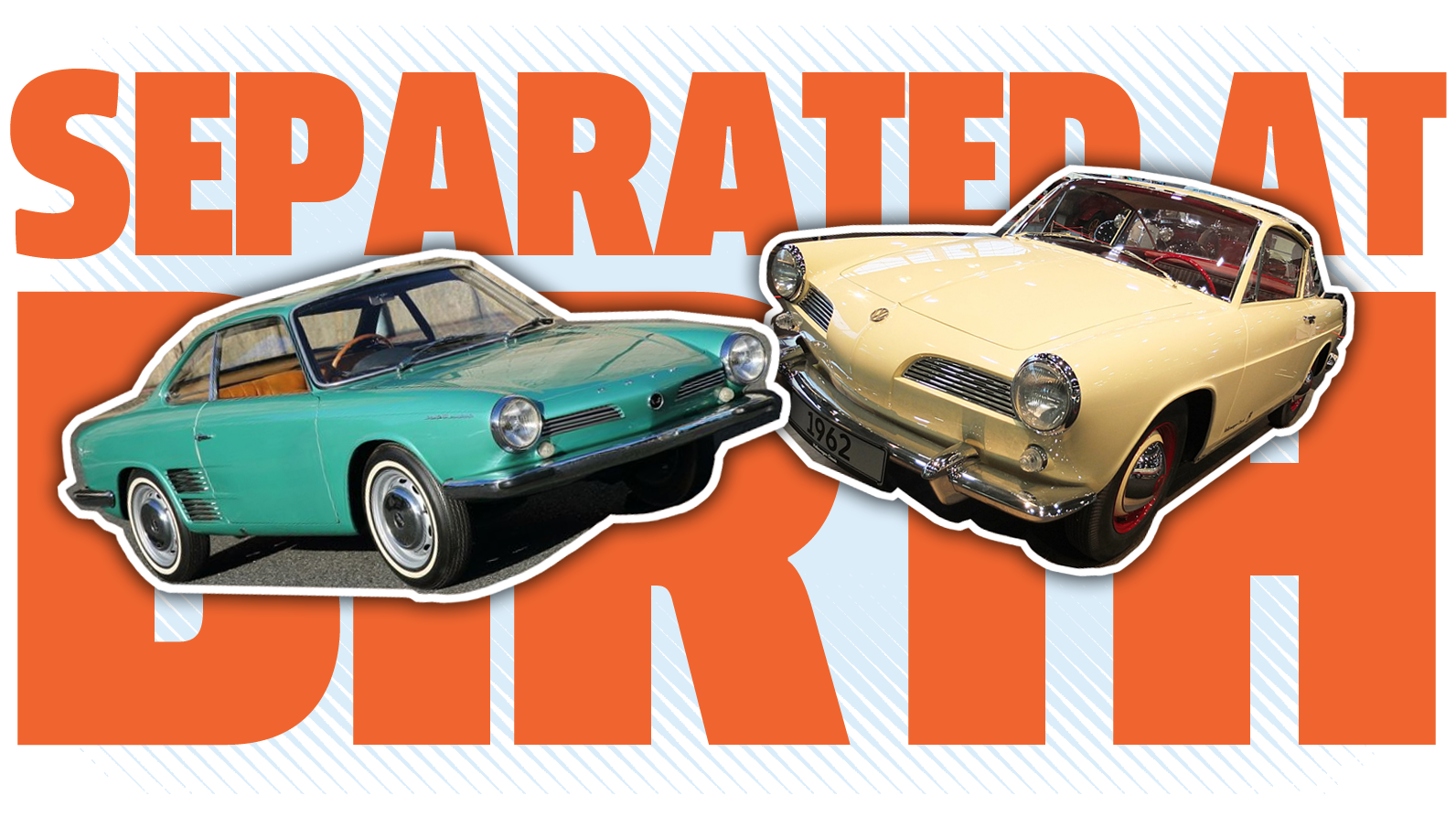 Auto design, like any fashion, comes in waves of trends, where certain looks and ideas gain momentum and swell, spreading around everywhere, before finally cresting, and then crashing. You expect cars to share certain commonalities of a given era. Even with that in mind, the similarities between these two styling concepts from 1962—one from Germany via Italy, one from Japan via, uh, also Italy—are really quite striking, and much more similar than you’d expect. I’m not saying anyone peeked at anyone else’s homework here, but, just look at them.


These strange near-twinsies are the Volkswagen Karman-Ghia styling proposal from 1962, and the Hino Contessa 900 Sprint concept, also from 1962. 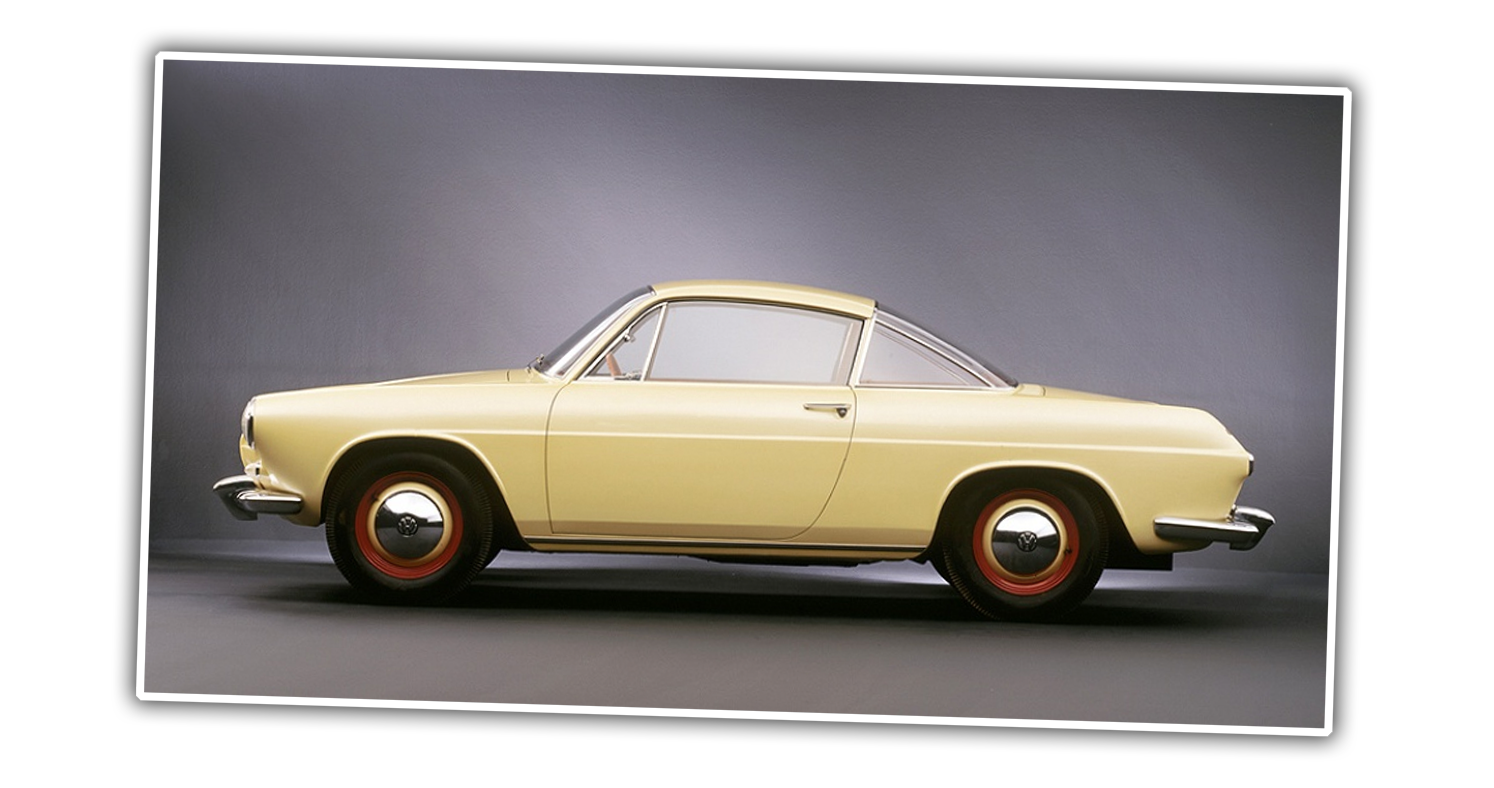 Let’s look at the Volkswagen first. As you very likely already know, Karmann was building Volkswagen’s first “sporty” car, the Karmann-Ghia, so named because it was designed by the Italian design house Ghia (there’s a whole story there, and Chrysler’s involved), and Karmann, which had been building the Ghia since 1955, felt it was likely time for an update.

Karmann’s management got designer Luigi Segre to take a crack at updating the Ghia’s very round, bulbous 1950s design and translate it into the more crisp, lean, and linear design vocabulary that had developed in the late 1950s and early 1960s.

The resulting design managed to skilfully incorporate many of the Karmann-Ghia’s iconic elements, like the cat-whisker-style fresh air intakes on the front face, the general proportions and shape of the greenhouse, but now with everything rendered tighter and leaner, with elegantly thin pillars and plenty of glass area.

The primary air intakes were just below the rear window, but the exit for the cooling air was set in a grille-like area between the taillights, the only real outside clue that a rear-engined VW chassis puttered under the skin.

It was really a nice design, clean and modern-looking, while retaining enough of the Ghia’s visual identity to make it feel part of the family. Volkswagen, though, was loath to update any of their cars for aesthetic reasons alone even if God’s scoutmaster held a knife to their throat, declined the update, and kept on with the basically the original Ghia design until 1974.

Meanwhile, in Japan, there was another company building rear-engined family cars that also wanted to use their platforms for sporty cars. That company isn’t well known today at all, as it was subsumed by Toyota in 1967, which ended their passenger cars and focused the company on trucks.

Hino was building Renaults under licence, specifically rear-engined Renaults like the 4CV. In 1961, Hino had adapted the 4CV platform into their own car, the Contessa, and in 1962, they began to explore options for a sporty coupé based on the Contessa. The Contessa 900 Sprint is that car. 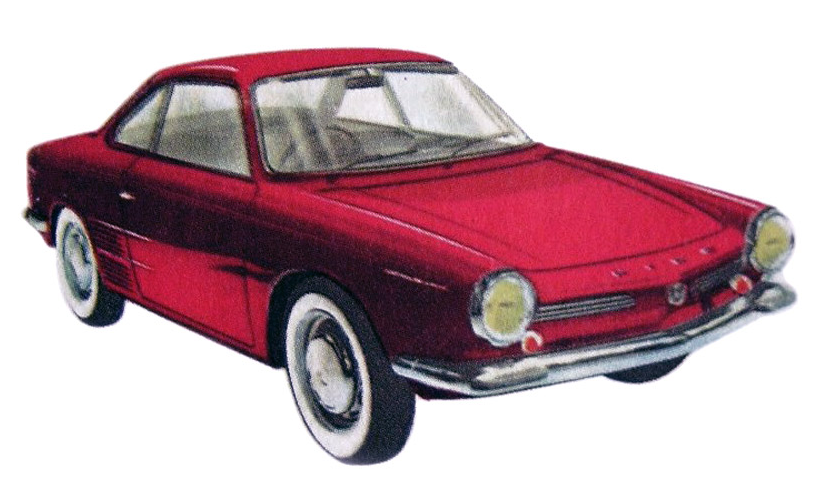 Hino got the famous Italian design house Michelotti to design the coupe, and the Italian tuner Nardi massaged the 0.9-litre engine to squeeze out a respectable for that size and time 45 horsepower.

The design of the car was very up-to-date, lithe and taut-looking, and with a front end that, I think, rather remarkably resembles the VW Karmann-Ghia design study.

Like the Ghia, there were a pair of long air intakes that meet the big round headlamps, flanking a prominent ‘nose.’ The Hino’s “face” was a bit shorter than the Ghia’s but the similarity is obvious.

The proportions and greenhouse shapes are very similar, though the Hino lacks the Ghia’s wraparound rear window and adds some striking-looking side air intakes that terminate right ahead of the rear wheelarch.

The rear is similar in design to the Karmann-Ghia concept, with an air-escape grille between the taillights, again, just like the VW.

The plan was to build about 1000 of these lovely little coupés, but the design was found to be too expensive to effectively produce, and just the one was built, which was shown at the Tokyo Auto Show in 1962 and 1963.

Later, there was a Michelotti-designed Contessa sporty car, the Contessa 1300 coupe, but it had a much different—but still very handsome—design. 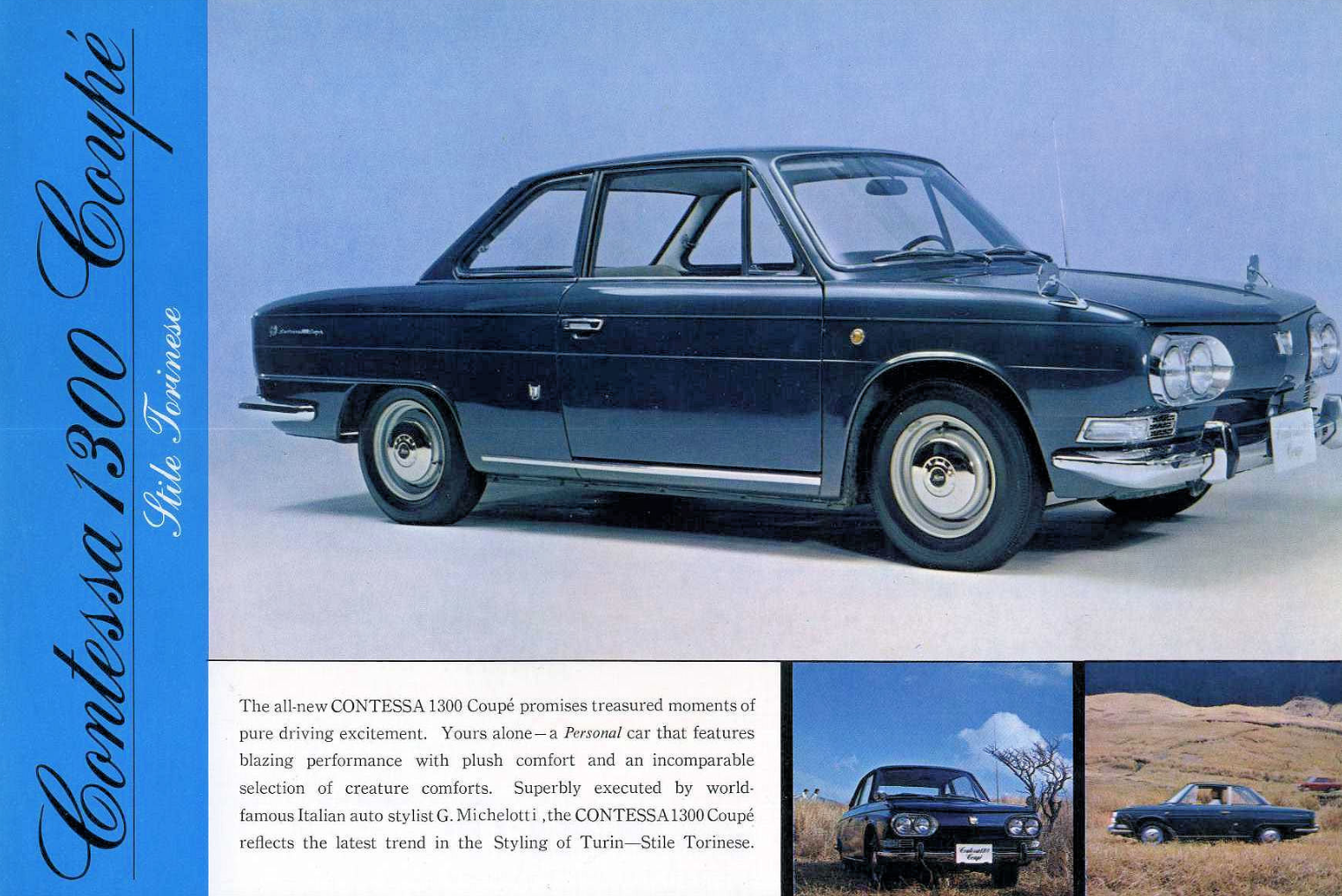 I’ll admit, I’m not entirely sure of what I want the takeaway here to be—I don’t think there was any overt cribbing of anyone’s designs, from the Ghia or Michelotti sides, but both seemed to have been developed roughly in parallel, and I think the sort of convergent evolution seen here is just fascinating unto itself. 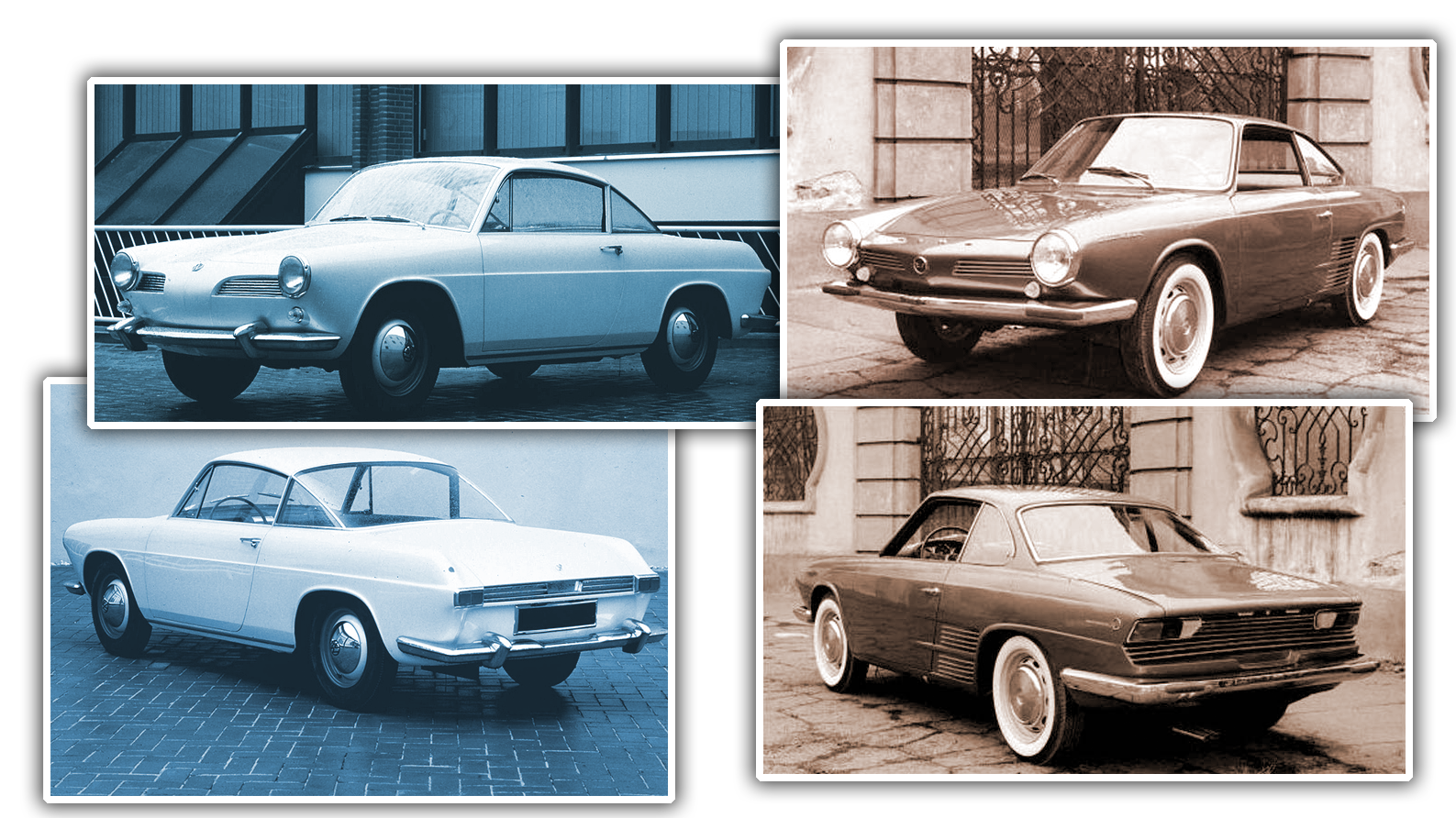 Two lovely rear-engined sporty cars, with same sort of look, and the same fate to be the lone examples of their kind. I think someone should introduce them to one another.