Even if NASA does somehow end up making its 2024 Moon landing deadline, it still has another big problem to reckon with: How to get its astronauts around in style. Because let’s face it, Boeing’s bare-bones moon buggy of yesteryear is so mid-century gouache.

To save us from any accidental, extraterrestrial fashion faux pas, Lexus designers recently drew up some sleek new concepts for 21st-century lunar transportation.

ED2, the European design studio behind Lexus and Toyota, submitted seven “moon mobility concepts”—aka moon whips—for art and fashion magazine Document Journal as part of the outlet’s Lunar Design Portfolio, a visual study of how folks might go about their lives on the Moon.

And they all look like they’d fit right at home in a Star Wars movie. The Lexus Lunar looks like the Apollo Program’s iconic lunar rover on steroids, the Lunar Cruiser’s hefty tires can handle rough terrain and turn 90 degrees to go completely off-road and fly drone-style, and I’m pretty sure the podlike Bouncing Moon Roller made a cameo in Spy Kids 2.

Don’t be expecting these designs to see the light of day any time soon; they’re just proof of concepts, an exercise in exploring how we’d putter around up there. But they’re still hecking cool to look out. Check out all seven below: 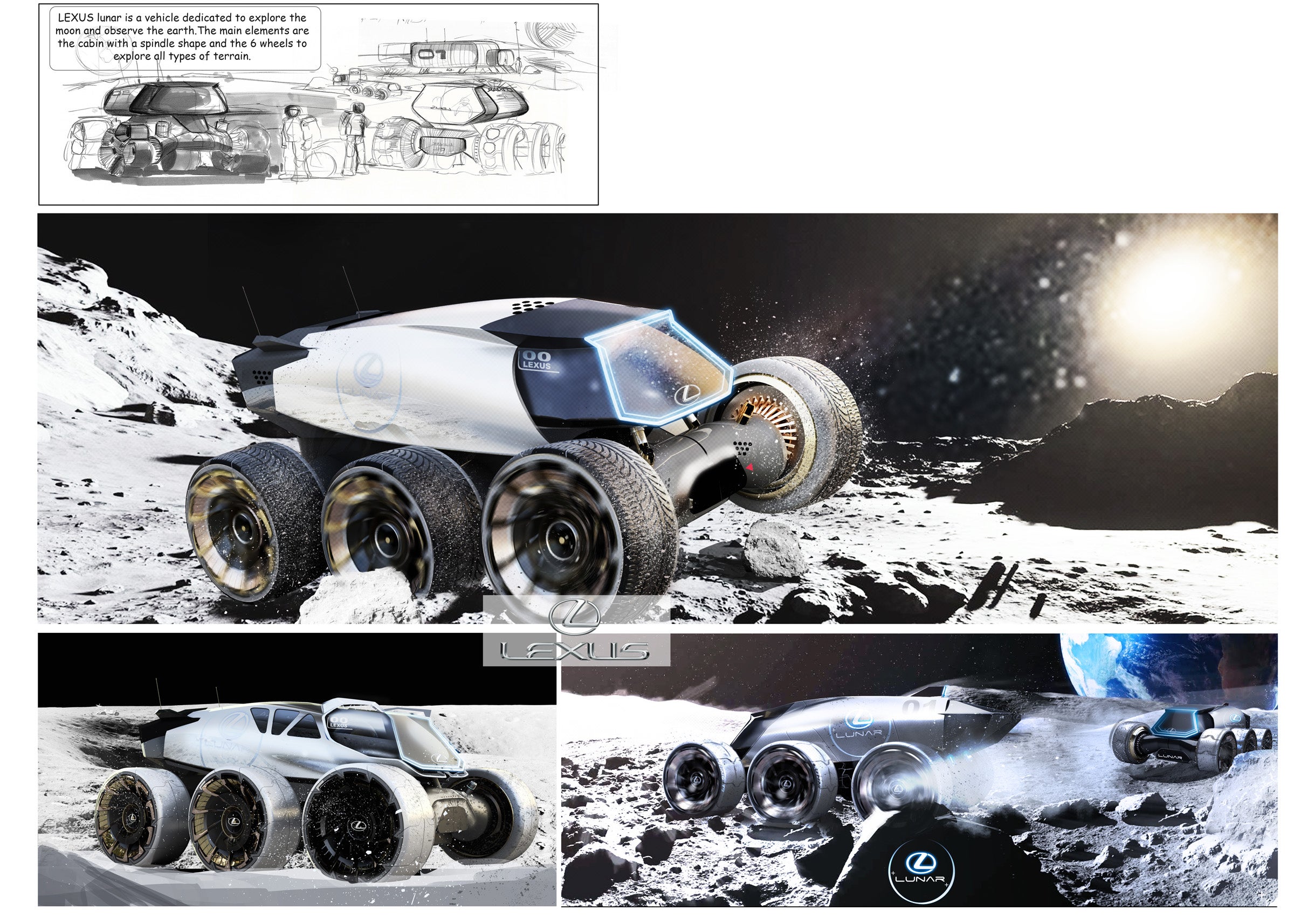 Lexus Lunar is a massive transport vehicle designed to explore and discover the moon safely. The vehicle is divided into two parts: the bottom consists of a platform with six rugged wheels to give the freedom to go wherever you want. The upper part holds the living area. The two components of the vehicle can be also divided, with the upper portion detaching to create the start of a lunar colony. 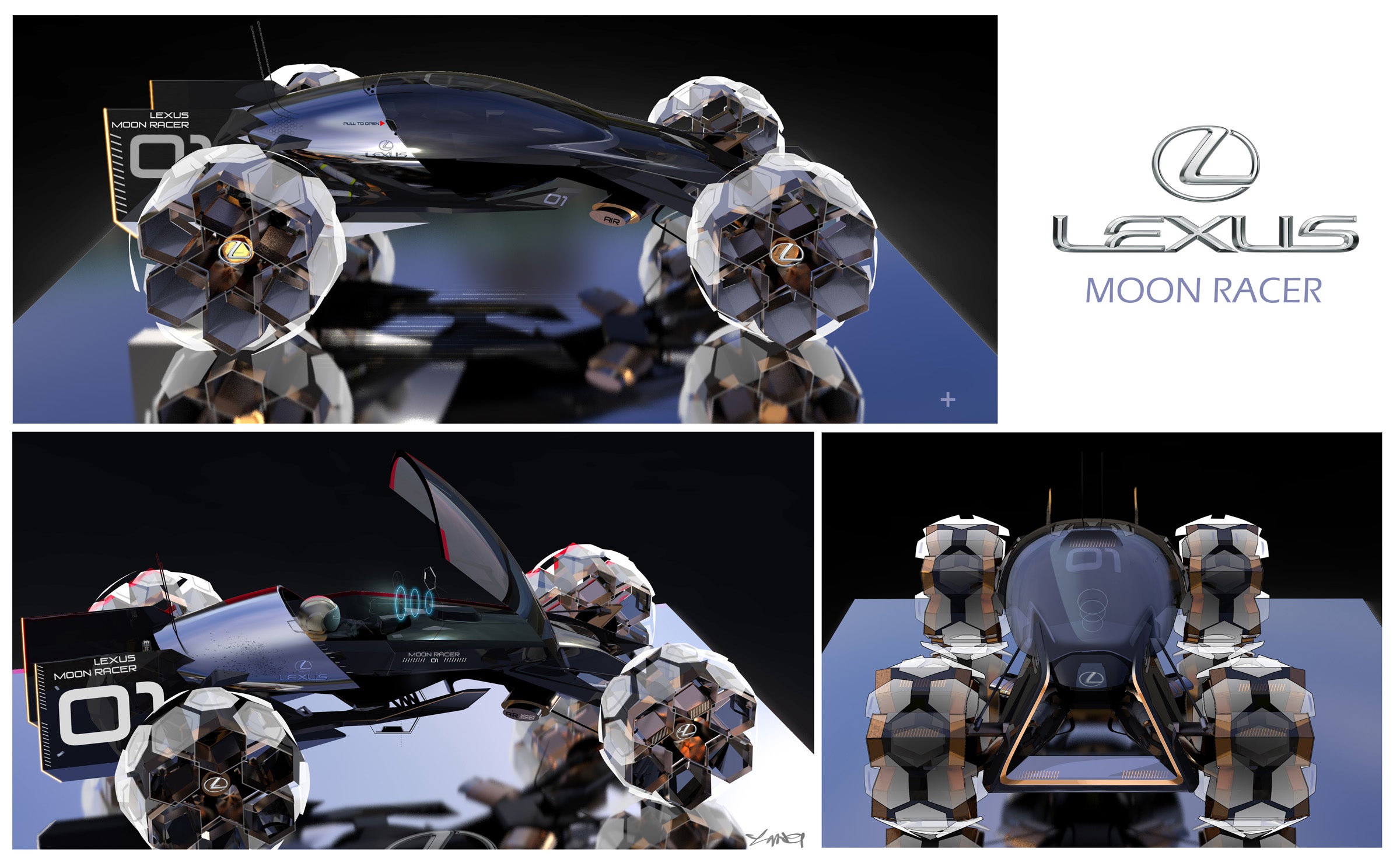 The Lexus Moon Racer is dedicated to the varied peaks of the lunar surface. This recreational vehicle is made for one human who wants to enjoy the effects of the lower-gravity in an amazing spot. You can jump, climb, race, and discover the entire moon. A giant glass bubble surrounds the driver in order to emphasise the feeling of freedom. 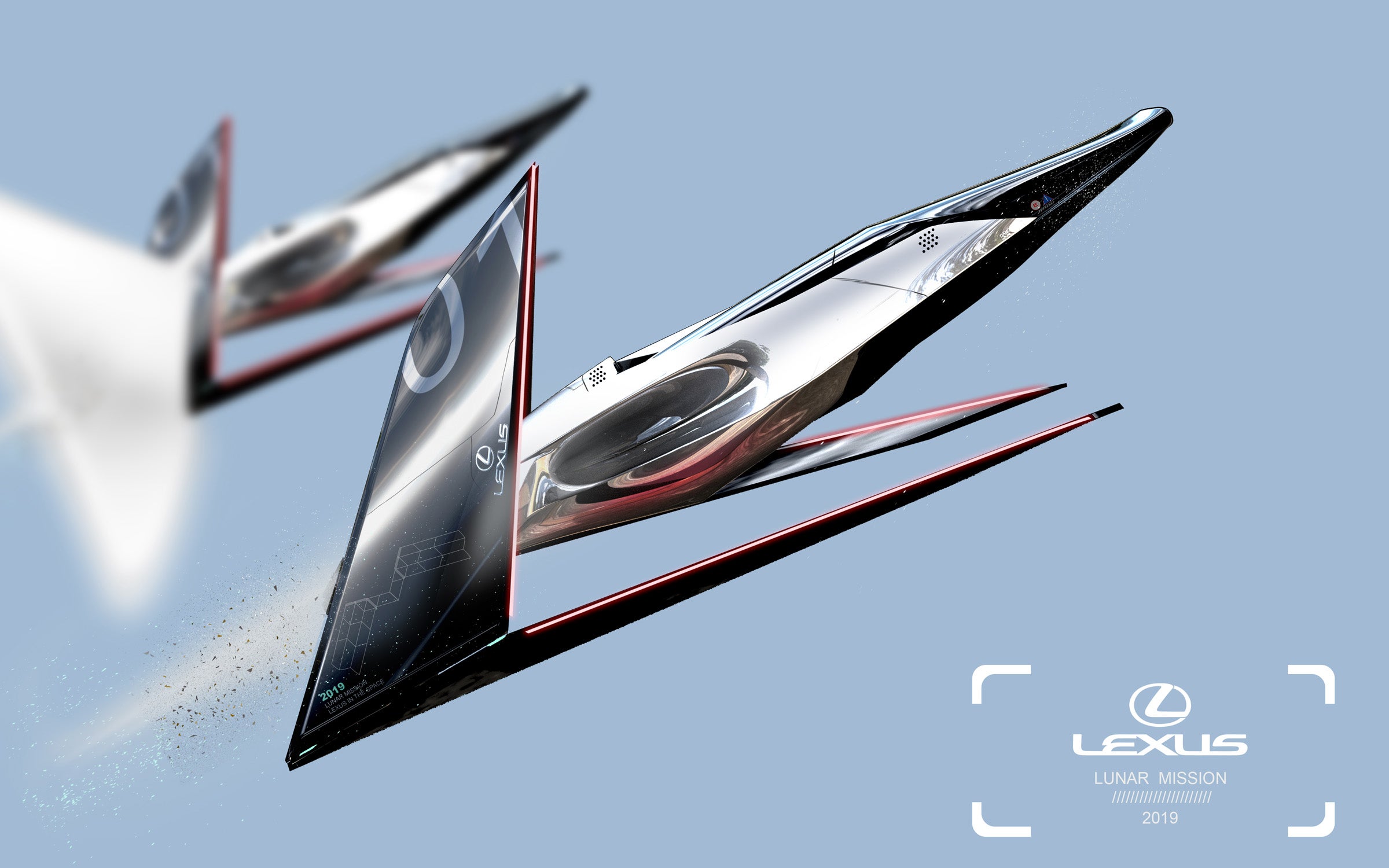 The Lexus Lunar Mission’s design integrates a liquid side body, which can reflect the universe while flying toward the moon. The wings are the iconic spindle shape integrated with the Lexus symbol mark as a main geometry. 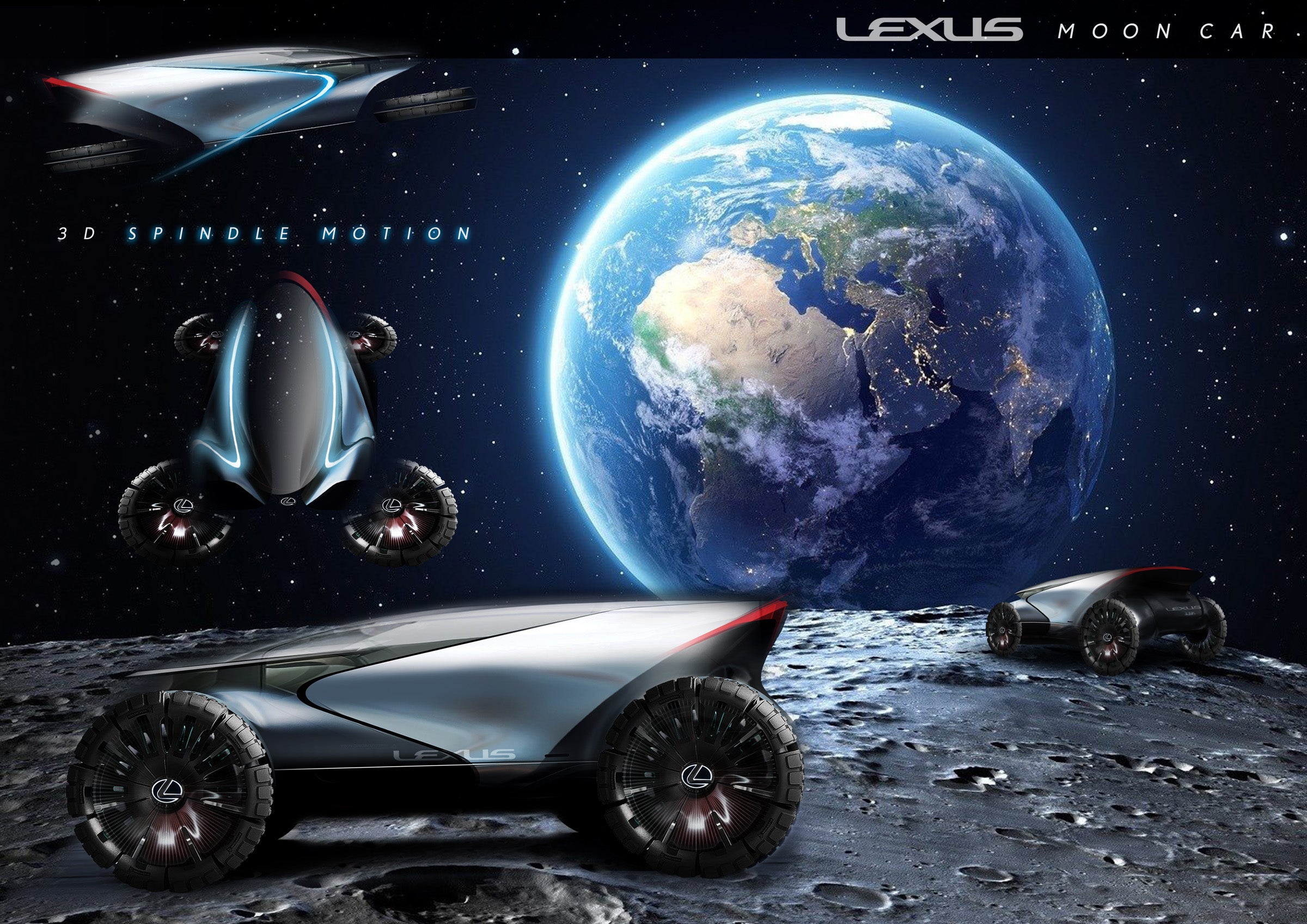 The Lexus “Lunar Cruiser” is a multipurpose vehicle for land and sky use on the moon. It has large tires that provide comfortable movement even on rough lunar conditions and can turn 90 degrees to fly like a drone. These allow the driver to explore the lunar land and sky freely. The organically shaped cabin has a unique body graphic in the shape of a “3D spindle motion,” providing an open vision and comfortable interior space while having an iconic appearance.

A transportation concept designed for both space and the lunar surface, the Lexus Cosmo features a fully sculpted glass shape that functions as a massive observatory to not only enjoy the view, but also explore the low gravity phenomenon. With a rear cockpit that emphasises the driving feel and a front portion dedicated to contemplation, the idea was to create a new luxury and exclusive experience for the future.

The design for the Zero Gravity concept represents the Lexus future through the reinterpretation of the signature spindle form. For Zero Gravity, the spindle grille becomes a 3-D spindle architecture, and sharp and square edges transform into fluid and curved surfaces, creating a mysterious design language. The motorcycle-style architecture enables a stronger connection to driver/pilot allowing for more direct control and feedback as human and machine mesh. With this model, the driver maintains total control while gliding smoothly over the rough, pitted and bumpy lunar surface, even at an estimated speed of 500 kilometers per hour.
A bouncing moon roller protected by a flexible graphene nanotube based bubble, this structure allows the space roller to jump and roll with any angle over a wide range of terrain. In the gyroscope cell, a cockpit and batteries sit together. The wheel-like stabilizer creates a fun yet protected feel. (Image: Julien Marie, Lexus)

What immediately caught my eye, though, is the space motorcycle sketch that made the magazine’s print issue and this blog’s cover art: the Zero Gravity. There’s simply no convincing me that’s not a Tron light cycle. Just look at it! It’s even got a light trail behind it!

I asked the folks over at Lexus about the blatant ode to an ‘80s classic, and they informed me I was mistaken: When coming up with the light cycle’s look, designer Karl Dujardin “was purely inspired by Lexus LF30 Electrified, as he was the interior designer for this project,” said Prue Hyman, the communications manager of Lexus International, Prue Hyman. “Lexus philosophy as well as Tazuna concept are more influential on his creation on Zero Gravity than anything.”

Yeaaaah, I don’t buy it. Call it what you want, but that, sir, is a Tron bike. And I’m about to kick all y’all’s asses when we get to racing on the Moon.

Tegan Jones 26 Feb 2020 8:50 AM
In August 2019 Samsung announced the Galaxy Book S - a brand new light-weight laptop that promised a huge battery life as well as impressive performance and power. And as a rare treat, Australia was actually going to get it. While the device certainly delivers on battery, its ARM-based processor causes more problems than it solves, which may be a sticking point for people once they see the price tag.