It’s So Cold In Florida, Iguanas Are Falling From The Sky 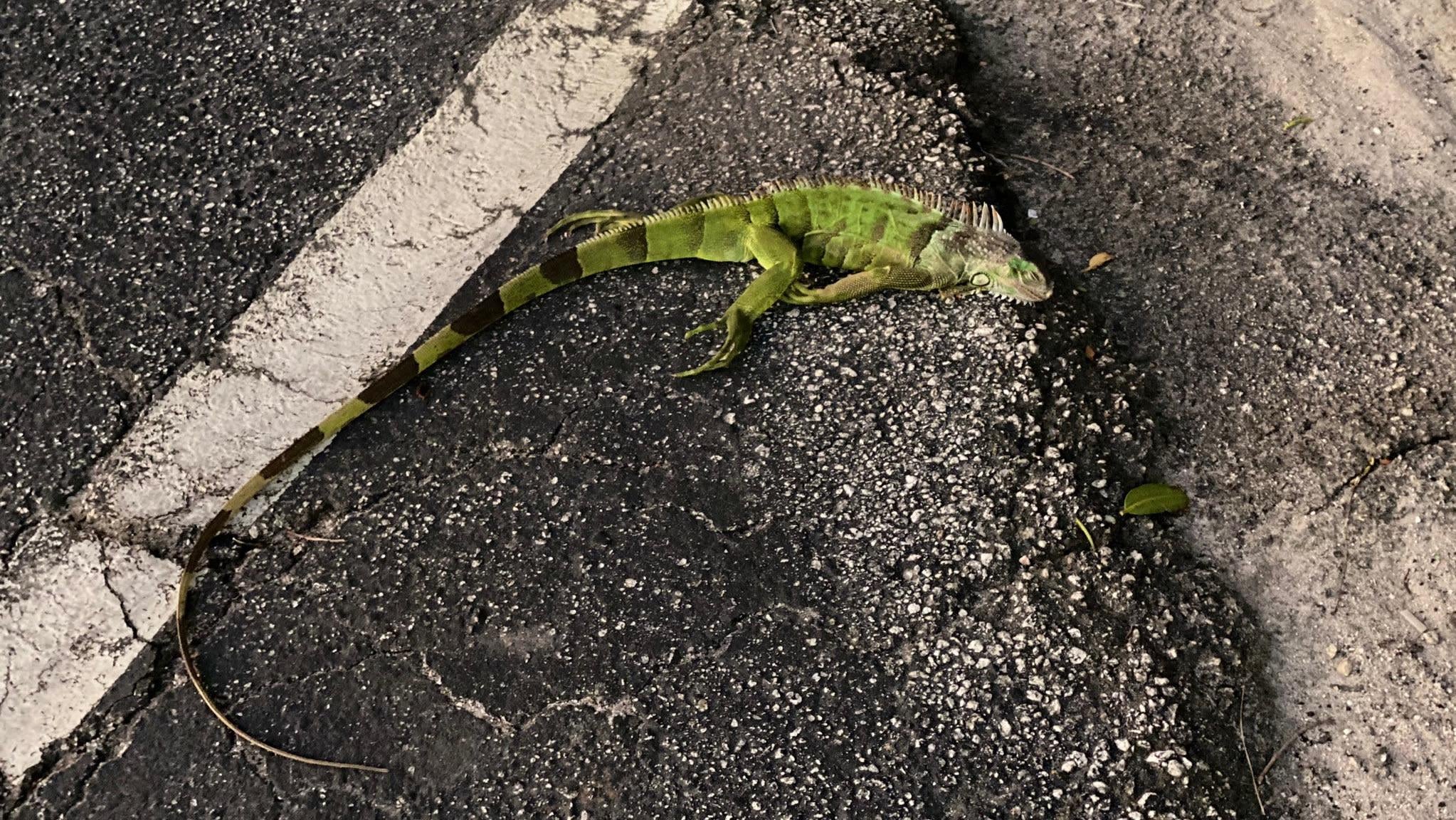 It’s cold in Florida, so you know what that means: falling iguanas. No, seriously. The U.S. National Weather Service’s Miami office issued a warning Tuesday that temperatures could dip into the 30s and 40s on Wednesday, leading to iguanas plummeting out of trees. And Twitter users confirmed Wednesday morning that many iguanas did, in fact, do just that.

Meteorologists and local reporters documented the fallen critters and cautioned the public to keep their eyes peeled for the green suckers lying stunned on the footpath or falling from the heavens. After all, nobody wants to see the poor lizards squashed before they have a chance to warm up.

Remember back in elementary school science class when you learned the difference between cold-blooded and warm-blooded animals? Well, this is a real-world example. Iguanas are cold-blooded reptiles, and low temperatures (or low by Florida standards, at least) can incapacitate them. The fallen iguanas gracing the Sunshine State’s footpaths are not necessarily dead nor are they frozen. They just kind of hit pause on life for a little until their bodies warm up.

Iguana know what this little????is dreaming of — probably Hawaii (No iguanas were harmed in the making of this clip) Just chillin’ ???? #FallingIguanas @OfficialJoelF pic.twitter.com/bqFzLMSYZO

This dude looks straight out of a Harry Potter film where someone hit him with petrificus totalus, a spell thatÂ leaves individuals in a frozen, immobilised state. In the middle of the footpath, though? Rough, but I guess it’s better than the side of the road like his friend below.

It's so cold #iguanas are freezing up! Watch out for #FallingIguanas as you're heading to work and school today. @WPTV @FOX29WFLX Photo Courtesy: Julia #FloridaWinter #FLwx pic.twitter.com/F3EAnp8bzh

Or straight up on the road like this one. And for those wondering, it’s unlikely lil homie is dead. They all just look like it!

Verification of the @NWSMiami iguana warning! That boy ain’t going nowhere… young one couldn’t take it (might be dead) pic.twitter.com/P8d2y3PzIO

[DJ Khaled voice] Another one!

⚠️WATCH OUT! ⚠️Here’s proof of cold stunned iguanas. They can fall from trees. Thank you to our Storm Team 5 meteorologist @SteveWPTV for snapping this picture. FYI It’s not dead. @WPTV #FloridaWinter #amcrew pic.twitter.com/fTnajB19rc

Here are some more where the homeowner was sweet enough to protect the iguanas from dogs who might otherwise think the animals are chew toys. Imagine your little puppy running into your house with an iguana in its mouth. No thanks.

Iguanas dealt with a similar shock in January 2018 when polar vortex-induced cold descended on Florida, urged people to kill them. It’s cold out and dangerous in these Florida streets, but the iguanas are hanging in there.