If Squids Ruled Earth, What Would Their Cars Be Like?

It’s a question a child might ask, but not a childish question. Sure, right now, we mammalian primates are calling all the shots here on Earth, but what if things had gone otherwise? We know that cephalopods like Squid and Octopi are really smart — what if they were the dominant life? And, more importantly, what would their cars be like? 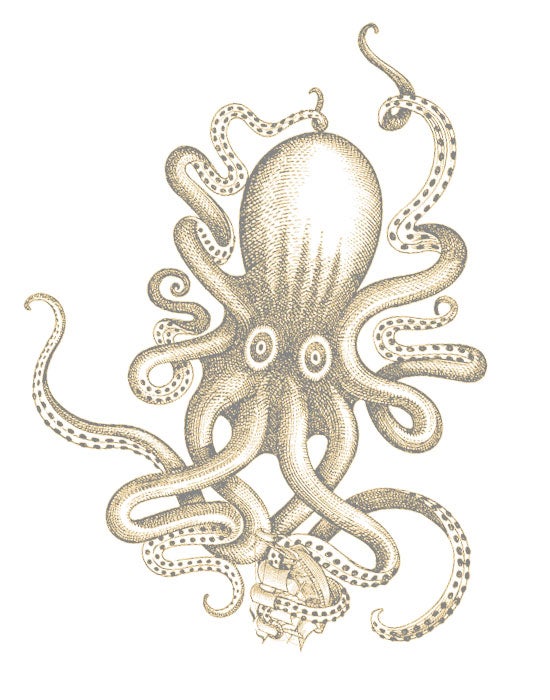 For the sake of this little thought-experiment, let’s assume a few key things: first, cephalopods have evolved to be the dominant intelligent life on earth, and have achieved an intelligence, culture, and technological base roughly on par with what we humans have done. We’ll also assume that, since I want to write about the cars these squidbeasts use, they’ve evolved to live on land and have need for land-based transportation.

These beings aren’t exactly like the squids or octopuses we know today, but still share the same basic body layout and design, just like we do with lower primates and, to a somewhat lesser degree, pretty much every other four-limbed vertebrate out there. So they’ve got at least eight prehensile tentacles, soft bodies, and rapidly change their skin colour to communicate.

Like us, octopi and squid have excellent vision and eyes that, while evolved separately from our mammalian eyes, are as complex and in some ways, even a little better — they lack the blind spot in the centre of the retinas that we have. For this reason, I think we can assume the very visual task of driving will be something these intelligent cephalopods will be doing.

So what will their cars be like? As an example, let’s make up a hypothetical cephalopod car, and call it the Squoda Octuvia, because I’m a dork. Here’s my best insight into the alternate world of cephalopod automotive design: 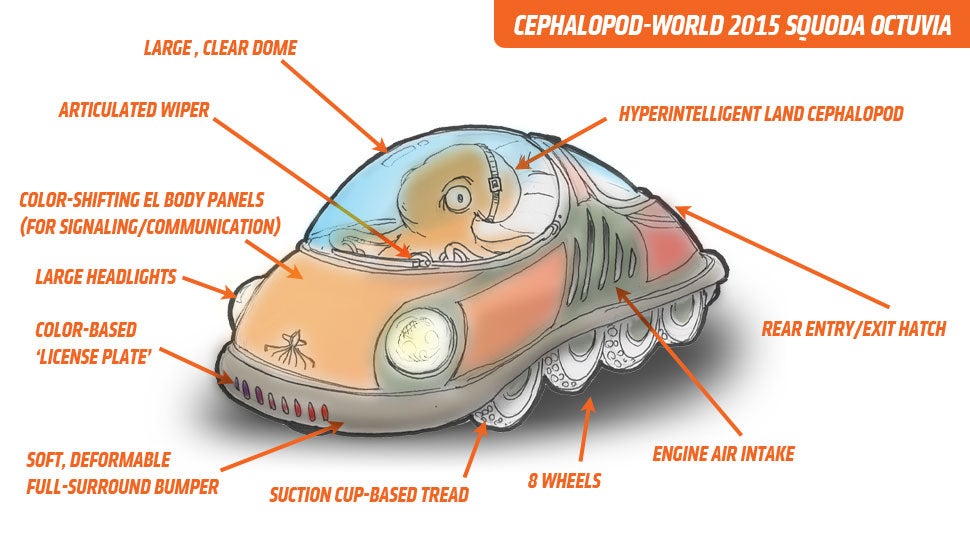 A few basic things: I’m giving the cephalopod car eight wheels, because I think there may be something a little innate about giving your vehicles the same number of wheels as you have limbs. We don’t look like our cars, but in very general plan, our cars resemble the four-legged layout of big draft animals like oxen or horses. Very generally. I’m going to say the Squidnoids will have similar urges, and go with an eight-wheeled vehicle.

I think the overall shape and design will reflect the cephalopod’s own rather streamlined aesthetic, and certain distinctive traits, like the cephalopod’s large eyes, would be reflected in the large-headlight design.

A large, soft, deformable bumper would surround the car, being similar to the cephalopod body and echoing the type of object-contact interaction they’d be used to. There would only need to be one smallish entry/exit door at the rear — they’re very good at getting in and out of small openings — and most of the roof would be enclosed with a glass or plexiglass dome, since, having evolved as sea creatures in the omnidirectional underwater world (as opposed to the mostly 2D travel on land), they’re probably more comfortable with nearly 360° of vision.

Also, where we use discrete taillights and turn indicators to communicate with other drivers, I suspect cephalopods will use a full-car-body colour signalling system that reflects their own colour-changing skin. Cephalopod cars will be skinned with dynamic electroluminescent panels that will let them communicate, via colour. if they’re stopping, turning, braking, whatever. 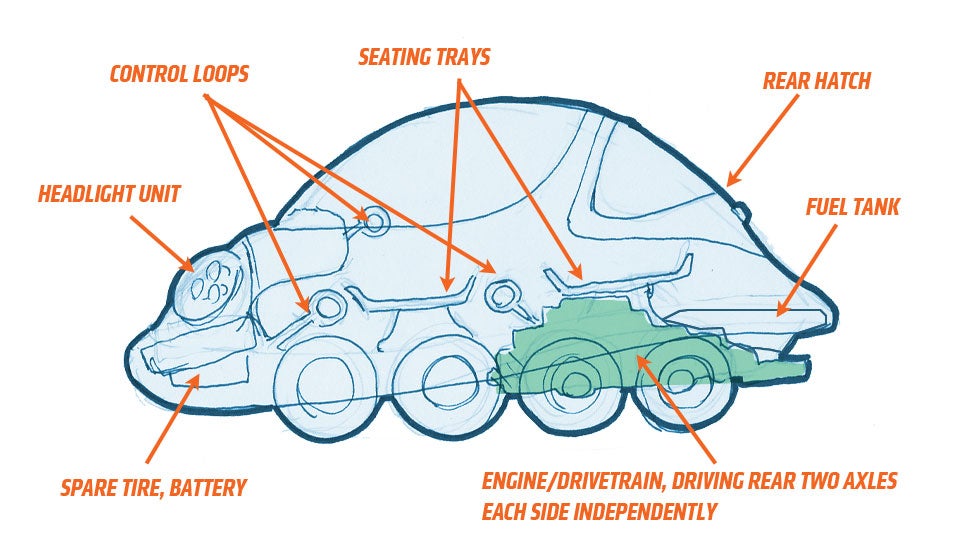 Technically, I’m assuming that there was a squidy version of all our automotive innovators, and they ended up with basically the same tech as we have. The big differences would be that I think the standard automotive layout would be mid-engined and use a tank-like skid-steer method for steering.

I’m picturing of the eight wheels, the rear four are actually driven, and the differential is capable of sending power to just one side or the other, which, for some reason, feels like something an octopus would find more natural. I’m not totally sure why.

Inside, there would be ‘seating trays’ for the cephalopods to sit on, which would allow all their tentacles freedom of motion. To actually drive, I think a possible dash/control layout could look something like this: 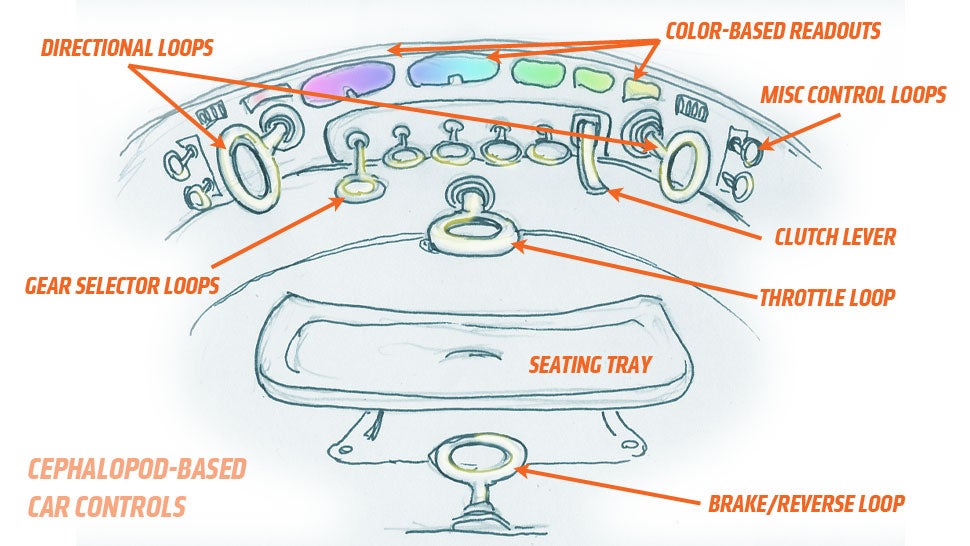 Where we tend to go for buttons or knobs, I think a ‘tentacle loop’-based system would work best for tentacles. They’d grab the ring and pull or twist as needed. I’m picturing two steering loops, one at each side of the dash, each controlled by a dedicated tentacle.

Below the main dash, there would be one forward throttle loop to control the speed, and directly opposite, gripped by a rear-facing tentacle, would be the brake/reverse loop. Pulling the loop activates the brakes, more pressure equaling more braking, and once pulled past a partial stop, reverse would be engaged. Pushing back again disengages reverse, and lets up on the brakes, though it could be spring-loaded as well and return to a neutral state when released.

Since these smart octopi deserve to enjoy driving as much as we do, I went ahead and thought about how a manual transmission might work here. I think there could be separate individual control loops for each gear, and a clutch lever. One tentacle would be available for the clutch, another would pull gears.

That uses six tentacles, leaving two to handle any miscellaneous controls (lights, wipers, squid-XM radio, etc) which should be plenty. Oh, and I think keeping with a colour-based visual communication system makes sense, so the gauges display their speed, fuel, etc. information via colour patterns, and even their equivalent of licence plates is colour-based.

That’s what I’m thinking, but as always, I’m curious to discuss this will all of you more, and if there’s any intelligent octopi in some tank in some lab somewhere reading this, please feel free to chime in!