Apple Fixed the Most Annoying Thing About Wireless Charging, But MagSafe...

The Portable Atari Mini Pong Jr. Is Like a Nintendo Switch... 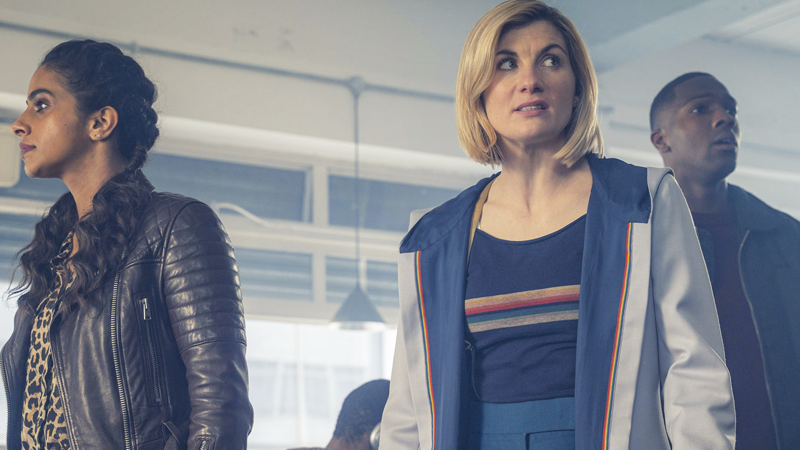 Last night’s Doctor Who was meant to be, like much of season 12 so far, a reminder of its more familiar self of the past few years in the wake of last season’s bold experiments with the tone and scope of the show. Familiar aliens stalking familiar Earth streets, a monster-packed romp just like the good old days. And then suddenly…it wasn’t.

Don’t get me wrong, â€œFugitive of the Judoonâ€ was definitely a throwback to The Stolen Earth/Journey’s End,â€ itself a season on from their more substantial debut in â€œSmith and Jones.â€

Putting said Judoon on the streets of Gloucester, happily hunting down a mysterious target in contemporary England as they cataloged humans, felt ripped right out of the very best of Russell T. Davies’ â€œaliens among usâ€ oeuvre. They even grimly executed a few civilians after their mandatory â€œhere’s a scene explaining my life just so you feelÂ a little sad when I get mercilessly offedâ€ screentime!

And then John Barrowman showed up out of nowhere, and it really felt like an episode of Davies’ Who. 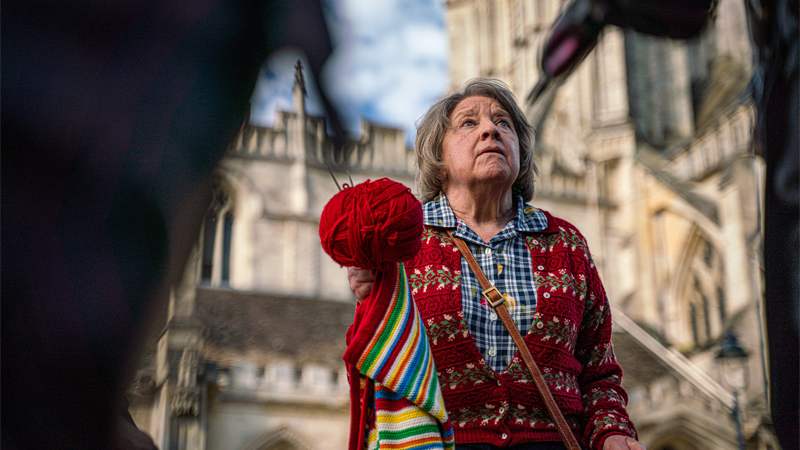 Poor Marcia. First, nine months of knitting evaporated, and then she gets zapped by a containment field. (Image: BBC)

But even beyond that initial shock”the return of quasi-immortal ex-companion and occasional spinoff vehicle Captain Jack Harkness has been something both Barrowman and multiple showrunners of modern Doctor Who have attempted to tease for some time”â€œFugitive of the Judoonâ€ was not just a callback to those days of yore (as much as 15 years ago can be considered the days of yore, that is). In fact, it was only just getting started, as the episode very quickly revealed that, really, it wasn’t all that interested in the Judoon at all.

The mystery of their target wasn’t, as the episode’s first half leads you to believe, a secretive husband named Lee (Neil Stuke) hiding a strange, alien trinket in his home from his befuddled wife Ruth (Jo Martin). Abandoning all pretense by its halfway mark, the episode revealed itself not to be a callback to the sort of fun, romp-y throwaway monster episodes that defined the early days of the Doctor Who relaunch in 2005. If anything, the show had just done that last week anyway, so it was probably for the best.

Instead, it was a callback to something older, and weirder, and in many ways far more exciting: the sort of wild, time-and-space-and-brain-breaking navigations of Doctor Who‘s long and twisting history that defined the show’s wilderness years, particularly the spinoff novels of the Virgin New Adventures series. Those novels primarily followed the continuing adventures of the Seventh Doctor and Ace, carrying on as if the show had never gone off the air.

But the longer they continued, the bolder they got with the free-reign, budgetless imagination books provided a show as rich as Doctor Who, and deeply rooted themselves in an esoteric series arc, inspired by scrapped ideas for the classic era of the show, that explored darker paths for the Doctor, gave Ace a harsher edge, and dived deep into hidden mysteries at the heart of Time Lord society. Sound familiar yet? 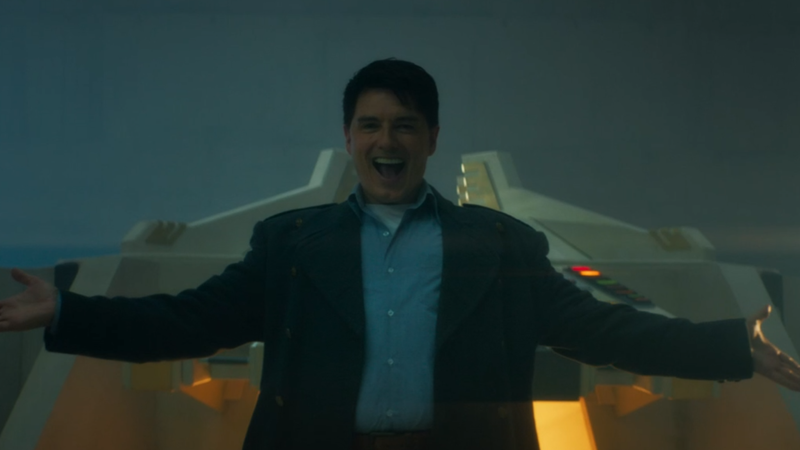 That’s even before we get to the fact that the Virgin New Adventures also gave us Paul Cornell’s â€œHuman Natureâ€”a story of the Seventh Doctor living on Earth biologically altered to be disguised as a human with no recollection of his true nature, an idea eventually adapted in the 2007 season of the show with David Tennant’s Doctor.

It’s a story of huge import to â€œFugitive of the Judoonâ€ because the real target the alien police force were seeking wasn’t Ruth’s shifty husband, but Ruth herself. And Ruth harbored a wilder secret than even she knew: She was the Doctor, altered by her Chameleon Arch into believing herself to be a human, hiding away on Earth from a faction of Time Lords hunting her down in the name of glorious Gallifrey.

This â€œRuthâ€ Doctor doesn’t just provide us with a seemingly endless plethora of questions”we’ll get to that in a moment”but also a fascinating mirror to the current trajectory of our Doctor. Similar to our current Doctor in the wake of the Master’s return, this new version is distant, seemingly travelling alone and very eager for people not to be inside her TARDIS. She’s grown harsh, whether to her own people or otherwise. She’s willing to commit acts of shocking violence”even run around with a gun, and commit acts of murder, while sneakily keeping her hands clean of the actual act.

For all the mystery of just where in the Doctor’s timeline this particular Doctor is meant to lie, she feels like a natural evolution of the angry path the Thirteenth Doctor is propelling herself on”and would continue to have done so if not reminded that, unlike this other Doctor, she still has friends in the form of Ryan, Yaz, and Graham to support her through these dark times.

For now, those questions of character are left to linger in the face of a barnstorming mystery that is in equal parts heart-racing. Just when you think the breathless pace of this episode couldn’t hurl another twist at you, its climax builds to its biggest twist of all: The mysterious client the Judoon were acquiring Ruth Doctor for is working with a woman named Gat”and not just any woman, but another Time Lord, feverishly acting in the name of Gallifrey. A Gallifrey that, for both Gat and the Ruth Doctor, still exists, and isn’t a burning ruin laid low by the Master. 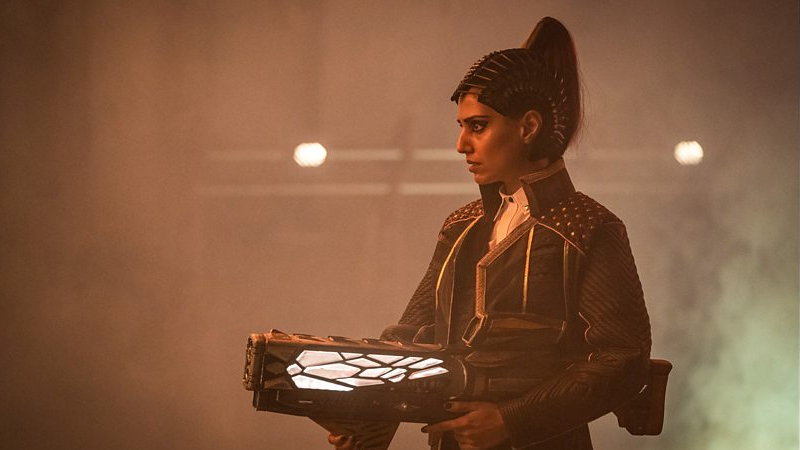 Like the existence of the Ruth Doctor, this is a revelation that threatens to tear the Thirteenth Doctor’s current trajectory apart. Aside from the obvious confusion that even she has no idea when the two Doctors are actually from in terms of her timeline, as the encounter between them and Gat plays out aboard the Judoon ship, our Doctor faces a sea of emotions that threatens to consume her. It’s not just being confronted with a version of herself that could be a sign of things to come that is so shocking for her, but the dual horror of being confronted with another surviving Time Lord. One that doesn’t just hate her, but declares her hatred of the Doctor in the name of the homeworld she recently watched burn.

It’s a moment of monumental crisis for the Doctor that is so draining”the frazzled, aimless way she wanders around Gloucester after being dropped off by her other self is utterly heartbreaking for a hero usually so defined by their sense of purpose”that it takes Ryan, Graham, and Yaz reminding her that she’s not at alone to snap her out of it all.

It plays a supporting part to the shock of these big mysterious set ups and twisty reveals, but it’s a vital part of these moments to play; without them, and without Whittaker turning in a truly impressive performance, these moments would feel like twists for the sake of twists. Exciting twists, sure, but what makes them matter is the clear and visible impact they have had on our Doctor, rather than their seeming impact on Doctor Who‘s twisty, turny, ever-malleable sense of canon. 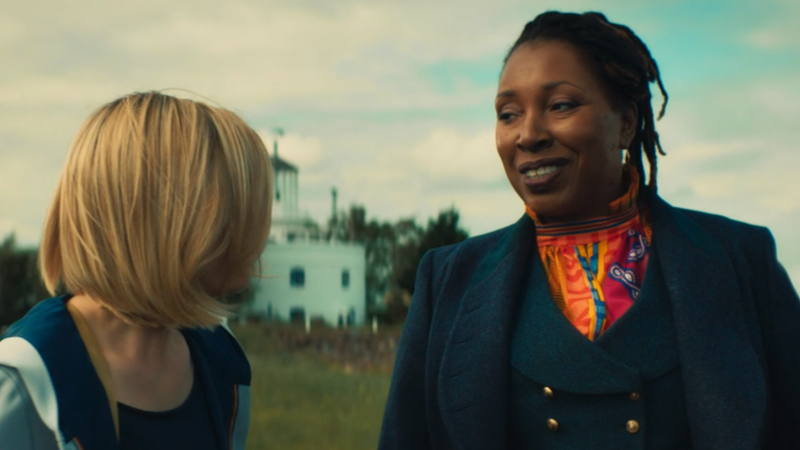 Oh, just the Doctor and her new friend, the Doctor. (Image: BBC)

Speaking of those questions, though, right now, it’s genuinely hard to tell what Doctor Who is trying to do here. There is an audacity to this kind of storytelling that is incredibly admirable”this is perhaps the most thrillingly shocking the show has been in years, pulling out three season-finale-tier twists before the season’s even half over. And yet in a way, for all the intriguing character opportunities it has laid out so far, there’s something almost concerning, too”especially when contrasted with the radically different tone and approach Chris Chibnall’s debut season as showrunner went in.

How did we go so quickly from a season that barely spoke of its past, to one that so deeply enmeshed itself in the messily gleeful delights of that past? How long can this sort of bold energy be sustained before it feels like Doctor Who is flinging fanservice at the wall in an attempt to see what sticks”or is leaning back way too hard into the season-controlling arcs and internal navel-gazing mysteries that came to define Steven Moffat’s version of the show, instead?

We can’t say yet. We’re just five episodes into this season, and at this point, it’s very clear there are a lot more mysteries left to uncover, on top of the heaps we’re already waiting to see if the show can stick the landing on. But one thing can be certain, in this sea of Time Lords, old friends, and new mysteries: it’s exciting as all heck to watch it unfold. 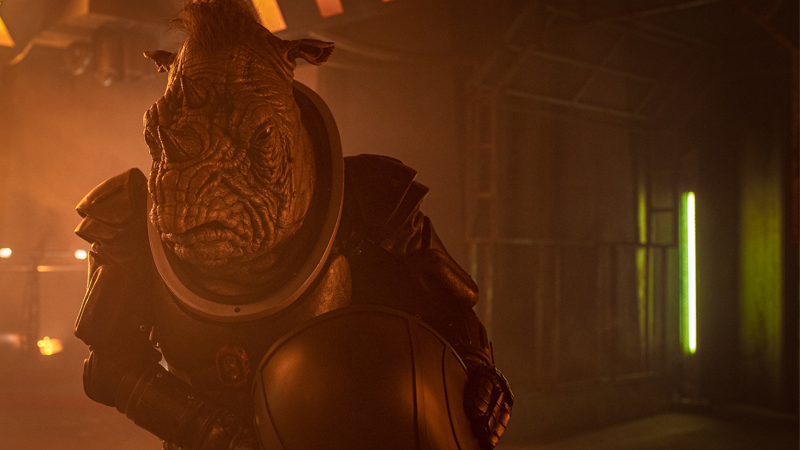