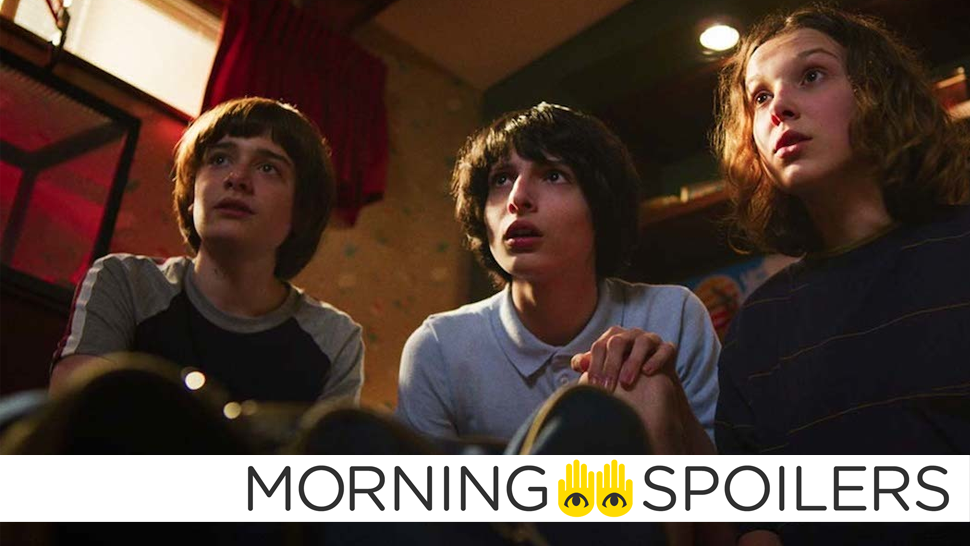 Bruce Campbell says a director has been found for a new Evil Dead—and it’s not Sam Raimi. Robert Pattinson teases the grey morality of his Batman. Star Wars: The Rise of Skywalker gives us another look at Keri Russell’s mysterious bounty hunter. Plus, f-bombs aplenty in new Terminator: Dark Fate footage. To me, my spoilers!

Deadline reports Sorry for Your Loss star Mamoudou Athie has joined the cast of Jurassic World 3 in a “lead” but otherwise undisclosed role.

The Sky Is Everywhere

THR also has word A24 will co-produce a film adaptation of Jandy Nelson’s YA novel, The Sky Is Everywhere, for the Apple+ streaming service. The story concerns two teenagers whose love may cause the universe to explode.

During a recent panel at the Rock and Shock convention in Massachusetts last weekend, Bruce Campbell revealed Sam Raimi has “hand chosen” a director to helm the next instalment of the Evil Dead franchise.

It’s ok to pass it along to another idiot to try and stop evil from destroying the world. One idiot tried – he did pretty good. It’s time to let other innocent people with no skills try to save the world. And there’s more stories to tell. So we think we have a cool premise. We have a new filmmaker that Sam Raimi has hand chosen. So he’s very involved in it. Will be involved in the story. And we’ll try and make sure the actors don’t completely suck. And then we’re gonna make another one, yeah. There’s lots of stories…creepy books…lots of people to torment.

In conversation with The New York Times, Robert Pattinson described Batman as a “dope character” but “not a hero.”

Batman’s not a hero, though. He’s a complicated character. I don’t think I could ever play a real hero — there’s always got to be something a little bit wrong. I think it’s because one of my eyes is smaller than the other one.

I love the director, Matt Reeves, and it’s a dope character. His morality is a little bit off. He’s not the golden boy, unlike almost every other comic-book character. There is a simplicity to his worldview, but where it sits is strange, which allows you to have more scope with the character.

Director Doug Liman confirmed to Screen Geek his solo Gambit movie has been effectively cancelled in light of the Disney/Fox merger.

I haven’t had an update since before the buyout. I think it’s done.

The upcoming sci-fi/comedy starring Melissa McCarthy will forgo its planned December theatrical release to debut on the ever-growing HBO Max sometime in the spring of 2020.

A new look at Keri Russell's mysterious '#StarWars: #RiseOfSkywalker' character is here. ???? Click the link in our bio for more details. ????: Lucasfilm LTD.

A new trailer for Terminator: Dark Fate is resplendent with both F-bombs and gratuitous violence.

A dog gains superpowers after being launched into space in the trailer for StarDog and TurboCat, featuring the voices of Luke Evans, Nick Frost, Gemma Arterton, and Bill Nighy.

Greg Kinnear has joined the cast of The Stand as Glen Bateman, “a widowed professor…accustomed to a solitary life” before the superflu hits. “When he encounters other survivors, his curiosity is piqued by Mother Abagail’s visions.” [Spoiler TV]

Meanwhile, Derek Cecil and Max Beesley have joined the cast of Stephen King’s The Outsider as Andy Katcavage and Seale Bolton, respectively. [Deadline]

Deadline reports Hellboy creator Mike Mignola is now developing his own animated anthology series, The Forever House, which promises to “encapsulate the feeling of an ancient tale told by the fire.” Set inside the titular abode, The Forever House is described as “a mysterious piece of unreal estate and a one-of-a-kind hub for otherworldly objects and international artifacts with dark histories.”

A set photo of Sheriff Hopper’s car has leaked online, possibly indicating the character’s return next season. Or maybe that someone jacked a dead man’s car. Rude!

Various Purge characters do their own thing in the synopsis for “Grief Box” airing November 5.

Alice reveals her origin story in the synopsis for episode five, “Mine Is a Long and Sad Tale.”

Alice (Rachel Skarsten) takes Kate (Ruby Rose) down the sad, winding road of her life in the days after the accident as Jacob (Dougray Scott) and Sophie (Meagan Tandy) attempt to track them. Mary (Nicole Kang) has an argument with Catherine (Elizabeth Anweis) which sends her looking for Kate at Wayne Tower, but instead she becomes unwelcome company for Luke (Camrus Johnson.) Carl Seaton directed the episode written by Jerry Shandy and Ebony Gilbert (#105). Original airdate 03/11/2019.

Kara must thwart a terrorist plot the same day CatCo launches their new line of VR contact lenses in the synopsis for “Dangerous Liaisons,” airing November 3.

Team Arrow reunites with Mr. Terrific to fight a new Deathstroke in the synopsis for “Present Tense” airing November 5.

ECHO KELLUM GUEST STARS – When a mysterious new Deathstroke appears in Star City, Oliver (Stephen Amell) and Team Arrow insist on taking down this villain themselves. Meanwhile reeling from the loss of one of their own, the future Team Arrow figures out a new way to try and stop JJ. Kristin Windell directed the episode written by Oscar Balderrama & Jeane Wong (#804). Original airdate 05/11/2019.

Veronica’s “caught between Hiram and Hermoine’s double trial” in the synopsis for “Witness for the Prosecution” airing November 6.

Nancy learns Tiffany’s ghost has possessed George in the synopsis for episode five, “The Case of the Wayward Spirit” airing November 6.

Sam and Dean investigate a child’s murder in the synopsis for “Atomic Monsters” directed by Jensen Ackles, himself.

Sam (Jared Padalecki) and Dean (Jensen Ackles) investigate the mysterious death of a girl and the disappearance of another. Jensen Ackles directed the episode written by Davy Perez (#1501). Original Airdate 07/11/2019.

A samurai arrives in Mystic Falls in the synopsis for “Since When Do You Speak Japanese?” airing November 11.

When a samurai shows up in Mystic Falls looking for a demon that possesses its victims, Josie (Kaylee Bryant) leads the charge to defend her friends from the demon’s wrath. Meanwhile, as Landon (Aria Shahghasemi) and Rafael (Peyton Alex Smith) head to Mystic Falls High in hopes of learning more about the mysterious Hope (Danielle Rose Russell), MG (Quincy Fouse) is conflicted by a secret he’s uncovered about Lizzie’s (Jenny Boyd) new vampire friend Sebastian (guest star Thomas Doherty). Finally, just as Alaric (Matthew Davis) lets his guard down around the town’s new sheriff, a confrontation with a demon forces him to reevaluate his priorities. Geoff Shotz directed the episode written by Penny Cox (#204). Original airdate 07/11/2019.

Abigael visits Harry’s subconscious in the synopsis for “The Truth about Kat and Dogs” airing November 8.

Mel (Melonie Diaz) and Maggie (Sarah Jeffery) attempt to find a missing Macy (Madeleine Mantock) with a spell while Harry (Rupert Evans) uses a different method – allowing Abigail to help him access his subconscious in an attempt to connect with his dark side. Tessa Blake directed the episode written by Johanna Lee (#205). Original airdate 08/11/2019.

Finally, Syfy has released a promo for the world premiere of Critters Attack!— the first new Critters film in 27 years.