I’m paranoid about lost luggage, especially when travelling for work.

I always carry everything I need to do my job in my carry on. This results in a really tech-heavy bag, as well as strange looks from security staff… especially if I’m carrying two or three phones.

It’s also given me quite the insight into what travel tech is worth it for long haul flights. So please, take a look inside my carry-on luggage.

The Middle Plane Seat Of The Near Future May Suck Less

In the push to cram more seats into planes, it can seem a little bit like the Federal Aviation Administration has totally forgotten about the poor economy class passengers trying to make their way through the world on a budget. And as more and more airlines start charging you extra for prime seat selections, the uncomfortable middle seat is often the cheapest way to go. Thankfully, the FAA has just approved a new middle seat design that may just make travelling suck a little less, as per Forbes.

A backpack might not be the most chic travel choice, but it’s definitely the most practical for my job.

Plus, there are plenty of nice looking backpacks to choose from nowadays.

I always opt for something with multiple pockets and specific compartments for my laptop.

I’m currently using STM’s 18L Myth backpack it has two external pockets for quick-grab items as well as plenty of internal storage with multiple compartments for my various tech.

It’s also quite structured and comfortable, which was a necessity for wearing all day at a huge convention like IFA. I also put it through its paces on some day-hikes in Europe. While I wouldn’t give up my regular hiking pack for anything, it did an admirable job as a fill in.

Earlier this year the iPAd Mini got revamped for the first time in since 2015.

While it isn’t everyone’s cup of tea, I am still a huge fan of the Mini and its giant bezels.

While the iPad Pro and other models in the range are incredible, especially if you want one that is powerful enough to be used as a workhorse, that’s not what I’m looking for in an iPad.

I love the Mini as a leisure machine. I can check emails and Slack and even work on it in a pinch, but I prefer to use it for pure enjoyment.

It’s the perfect size and weight for watching content from Netflix and Stan that I’ve downloaded for the flight. Plus I can read and game with it.

Sure, it’s not compatible with the Apple Pencil or Keyboard, but I don’t need it to be.

The iPad Mini isn’t for work, it’s for me. 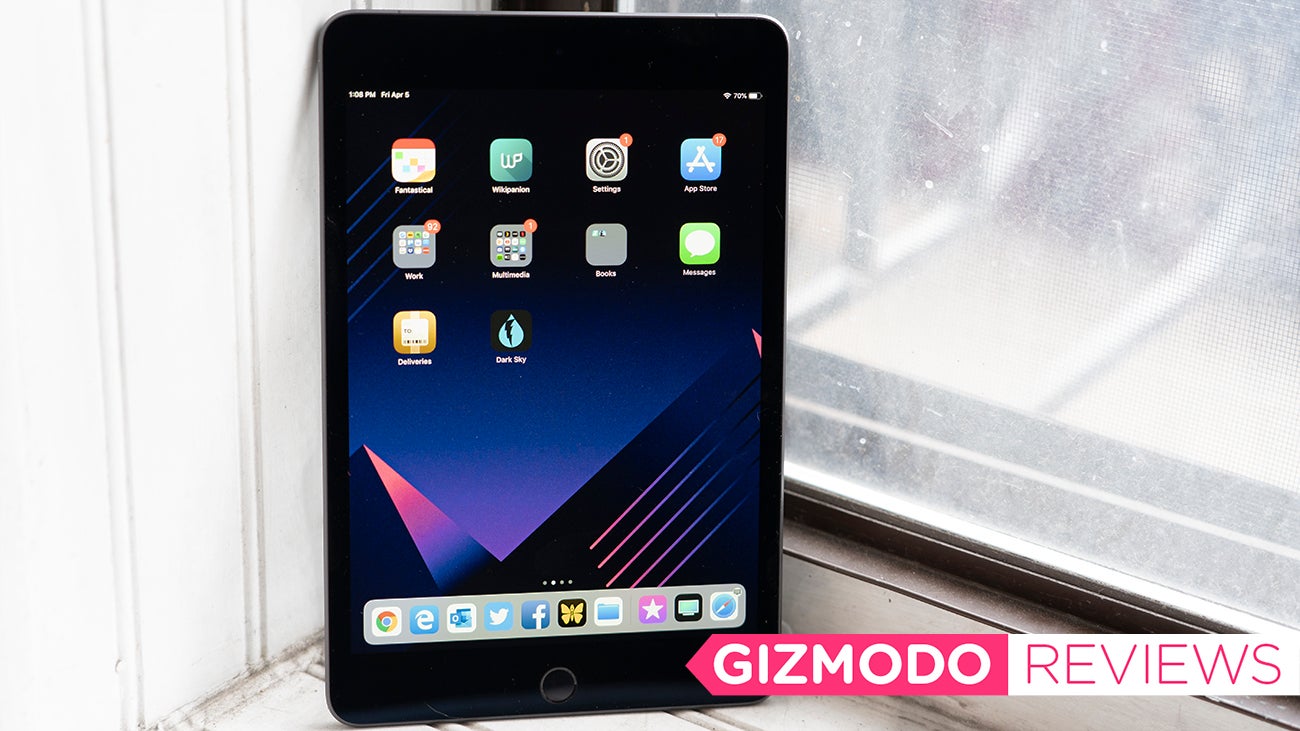 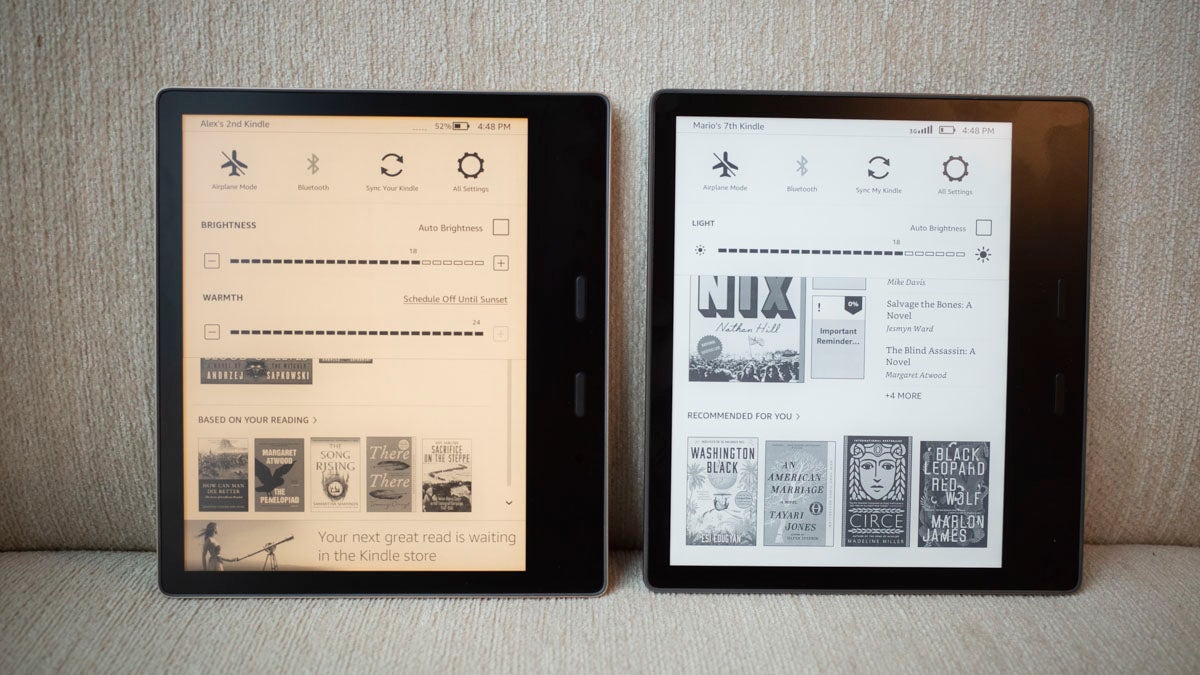 Growing up I would always take a book with me everywhere. Even parties and weddings. Don’t judge me.

The problem (besides my crippling anxiety) was how much space it took up and that I usually wanted options.

Kindles solve that for me.

I tend to use a Kindle Oasis and iPad interchangeably, depending on my mood, bag space and what I’m reading.

What I really like about the Kindle is that it’s easy on the eyes and has a multi-week battery life. One less thing to worry about charging on the reg.

It also weighs nothing and barely takes up any room in my backpack.

The main issue wit the Oasis is that it’s real pricey, coming in at $399. While I like that it’s waterproof, has a light and Wi-Fi connectivity, not everyone will care about those things.

Fortunately there are cheaper options in the range that are still great if you just want a good reading experience.

I still prefer the feel of a real life book, but I can’t go past the convenience and options that e-readers provide. 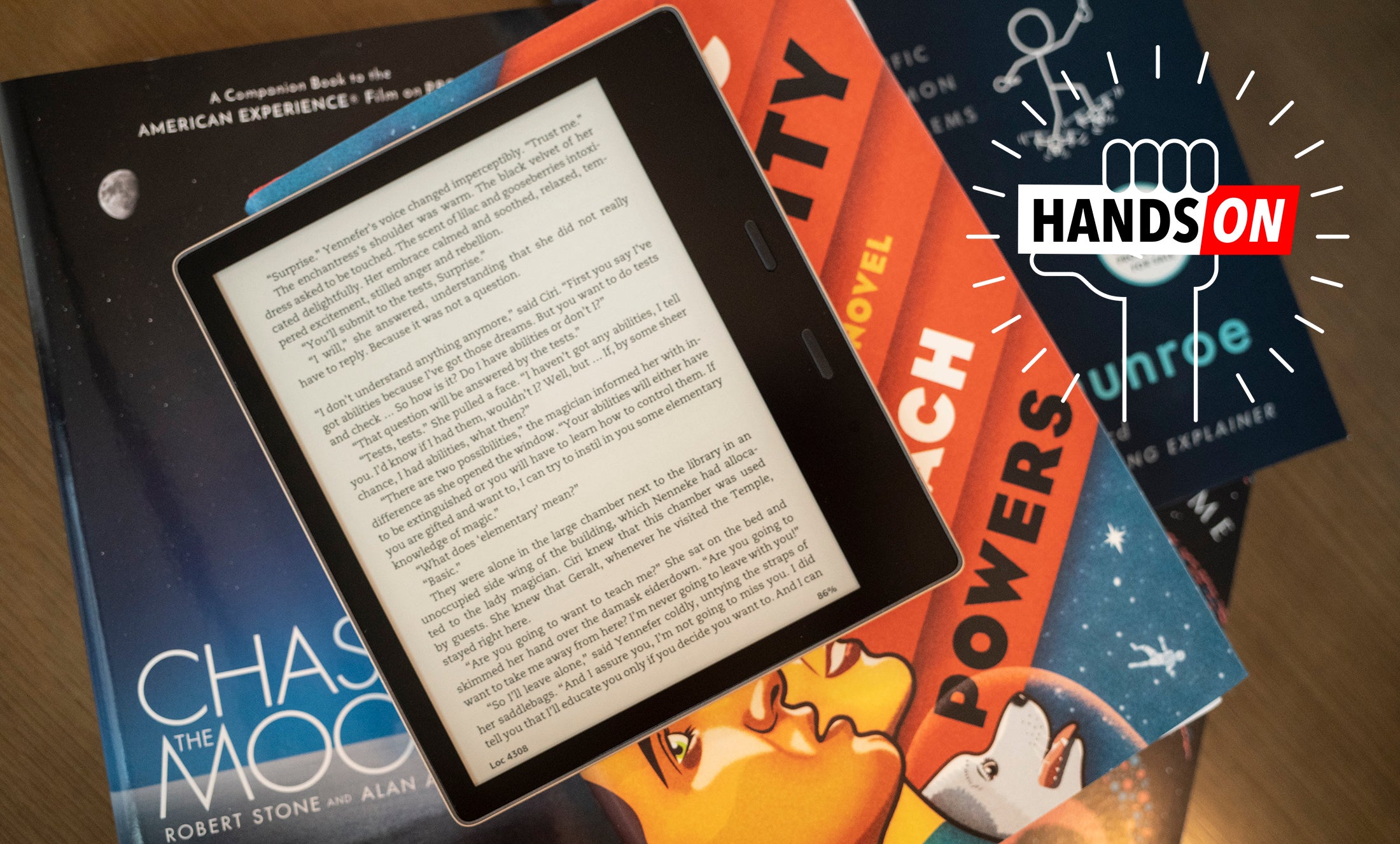 Amazon's New Kindle Oasis: Easier On The Eyes, Still A Pain In The Wallet

No one needs a $399 ereader, but the Kindle Oasis is often good enough that you can convince yourself otherwise. Its display and backlight are better than average, and its asymmetrical design is purpose-constructed for the avid reader. Though it’s got its detractors, I’ve always liked it. I read a lot, and I love e-readers.

I don’t go anywhere without my trusty steed. If you work a lot when you travel a thin and light laptop that doesn’t skimp on the specs will change your life.

I chose the 2018 XPS 13 because it’s slim, sleek and powerful. Not only does it look stunning, but it has the specs, battery life and features to back it up.

I’ve taken this to huge international shows like IFA and CES, as well as countless other local and overseas launches and its always had my back.

It’s light, so I have no problem taking in anywhere. This is important because you never know when a story might crop up that I need to write on the fly.

And because it’s touch screen, it fits well into my work flow even if I’m not carrying a mouse at the time.

Whether I’m crammed into a plane seat, filing from the floor of an over crowded media room or pretending to be fancy in the lounge, I’ve always found the XPS 13 perfect for the job.

There are newer models too that are worth looking out for.

Starts at $2,499 for the newer model on the Microsoft store. You can probably find my 2018 model for far cheaper now though. 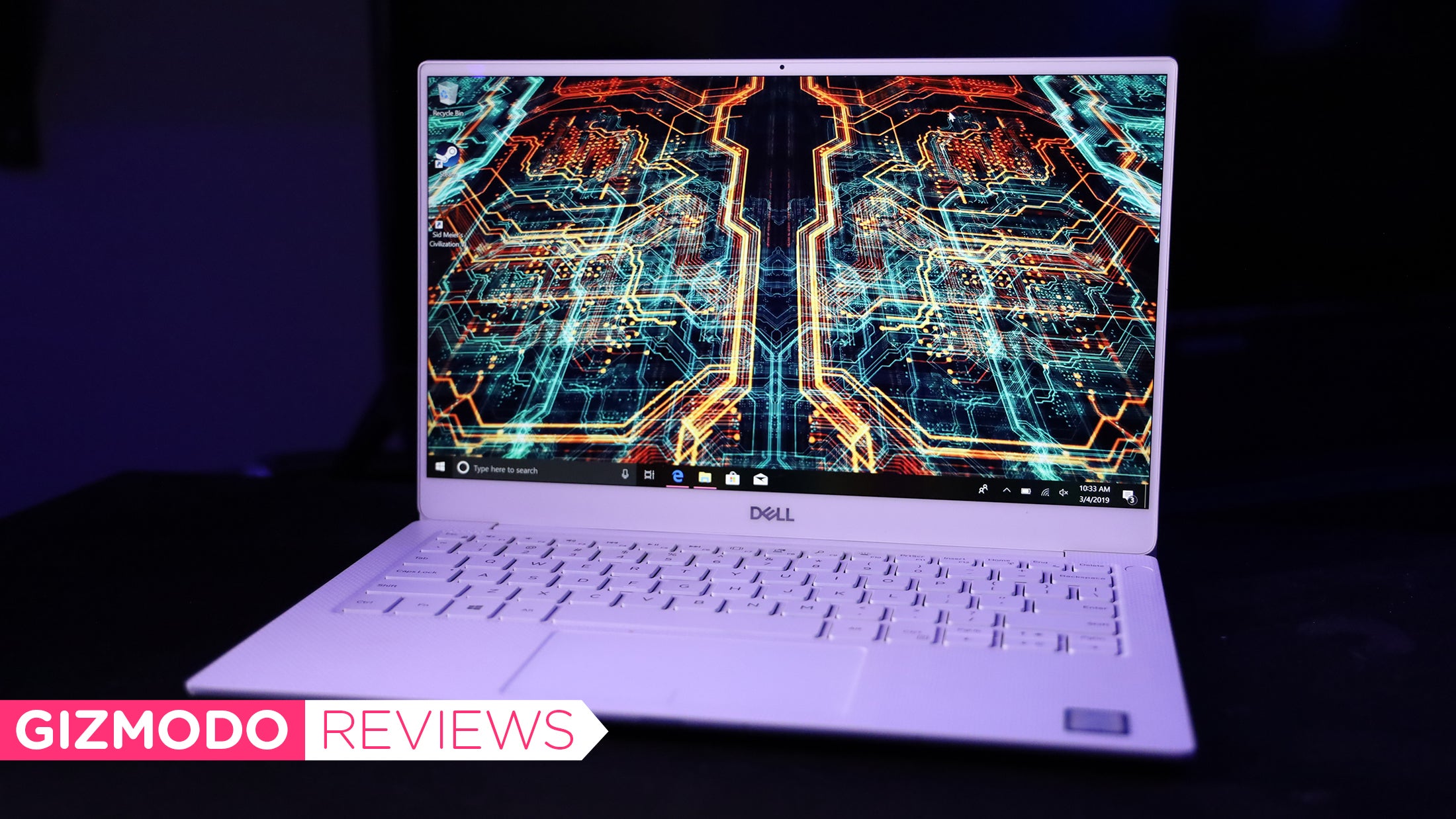 The Dell XPS 13 has been so dangerously close to perfect for so long that the latest iteration left me a little surprised. I was turning it this way and that to find something I could fault it for, not because I wanted to unfairly ding the product, it’s just that nothing is perfect. But Dell has so refined this version of its best 13-inch laptop that the issues with it are all minute and deeply personal. This is a near perfect laptop.

Sure, plenty of airlines provide a USB charger in the seat, but I won’t trust the fate of my devices to them.

They’re slow and some simply hold charge rather than actually juicing up your phone. No thanks.

I roll with a 20,000mAH battery pack with multiple ports. This leaves me safe in the knowledge that no matter what happens (delays, unexpected layovers) I’ll be charged up. 10,000mAH may also be fine for your needs as well, but I like to take my charging to the extreme.

I was heartbroken when I accidentally left my charger in a hotel room, so I couldn’t take a picture. But generally Belkin and Anker are safe bets when it comes to powerpack brands.

You’ll also find that increasingly more powerpacks are coming with USB-C ports – which is something I’ll definitely be investing for for my next purchase.

I’m a recent convert to the universal charger and I will never go back.

I ended up with one during a recent trip to Scotland after IFA after realising that I’d forgotten to pack a UK charge.

So I took a punt and ordered this Full-Featured International Travel Adapter.

Not only does the one plug take care of most countries you’re likely to go to, it also has USB-A and USB-C ports. It also comes with a convenient case for protection.

If you travel with a lot of tech or simply want a no-fuss and future-proofed adapter that you can take everywhere – I highly recommend this.

I love them for everyday use as well as flying.

They’re comfortable, have heaps of battery life and best for noise cancellation – which is exactly what I want in the air.

They’re also USB-C powered, so I can easily charge them with the same cable I use for my Android phone and laptop.

If you’re after something smaller that will be better for sleeping, you might want to consider Sony’s in-ear noise cancelling earbuds that came out a few months back. They have absolutely no right to be as good as they are.

I also quite like Powerbeats Pro wireless earbuds for flights. While they’re built primarily for exercise and don’t have noise cancellation, they’re super comfortable and I’m not worried about them falling out since they hook over the ear.

I was really excited when Sony's 1000XM3 headphones showed up on my desk last year. I was a big fan of the M2s and was curious about what improvements could be made to such high quality cans, especially when the price on the previous gen were still consistently high. Some shops were even still selling them at the same price. After living with these for the past few months, I have some opinions.

I’ve seen my bag get x-rayed at security and the cable situation is truly horrifying.

I tend to carry at least one of the following: USB-C to USB-C (thanks to my XPS 13), USB-A to USB-C, a lightning cable and my Apple Watch cable.

While I usually just use whatever comes out of the box, I am also partial to Belkin’s DuraTek range because the cables themselves are long, are made of durable fabric and come in weird combos I don’t think I’ll need until I don’t have one – like USB-C to lightning.

They also have straps so they can be rolled up and secured neatly. I should use them but don’t because I worship chaos.

Starts at $34.95 for the DuraTek cables, but also you can get cheaper cables basically everywhere.

I told you I like to have entertainment options.

I also enjoy extending the amount I can play my Switch without having to suck the juice out of my regular powerpack.

Enter Venom’s 10,000mAH powerpack and stand. Your Switch clicks right into it so you can charge and play at the same time. It also has an extra USB-A port.

Considering the not-so-great battery life of the original Switch, this has been a god send. How much extra time you get will depend on your preferences, but I’ve gotten a good 5-6 hours before. Just remember to turn that brightness down.

I’m a big fan and it’s resulted in me being able to spend many extra hours indulging in Fire Emblem: Three Houses on long haul flights.