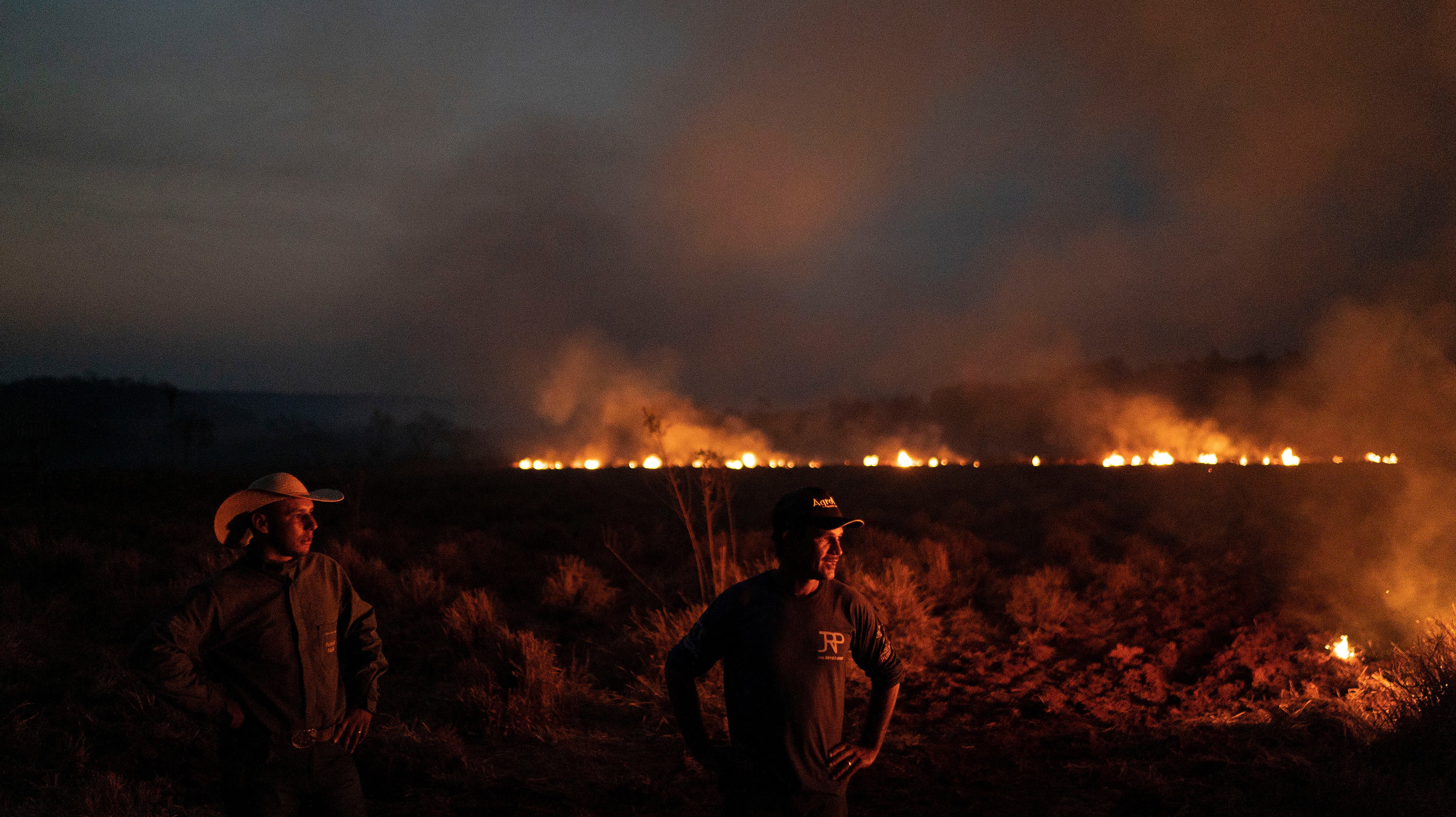 Brazil has deployed nearly 44,000 soldiers as part of an operation to fight the rampant fires currently burning in much of the Amazon, with officials stating two C-130 firefighting planes have also been dispatched, according to the Daily Beast.

After President Jair Bolsonaro, a far-right climate denier, took office this year and immediately began gutting the country’s environmental laws and agencies, the pace of the destruction of the Amazon has again picked up.

Data released by Brazil’s National Institute for Space Research (INPE) has shown well over 70,000 documented fires so far this year, an 80 per cent plus increase over the same time period last year and the largest number recorded since 2010.

This has every appearance of being a direct consequence of Bolsonaro’s attacks on environmental laws, which have reportedly emboldened the perpetrators of illegal land-clearing operations. Bolsonaro himself has launched a conspiracy theory that the fires are actually being started by environmental NGOs angry he has cut their funding, contributing to a growing international outcry.

Defence Minister Fernando Azevedo said that as of Saturday, the six Brazilian states of Para, Rondonia, Roraima, Tocantins, Acre and Mato Grosso have all formally requested military assistance, according to the Beast. As the New York Times noted, Bolsonaro appears to have been pressured into somewhat of an about-face as outrage spread about the fires and smoke began to blanket Brazilian cities:

The plan got underway hours after Mr. Bolsonaro — a longtime critic of Brazil’s strict, but sparsely enforced, environmental regulations — told the nation in a televised speech that the government would take a “zero tolerance” approach to environmental crimes.

That was a remarkable statement for a leader who has called environmental fines an “industry” that must be abolished, and has pledged to make it easier for industries to access protected areas. Mr. Bolsonaro himself was issued a fine in 2012 for fishing in a protected area. The fine went unpaid.

… During a news conference in the capital, Brasília, on Saturday morning, officials said they were organising a task force to assess how the military’s intelligence, logistical and transportation capabilities could contain fires set in areas where loggers and farmers have razed forest cover.

While some parties (including French President Emmanuel Macron) have overstated the amount of the Earth’s oxygen that the Amazon produces, as Science News noted, the destruction of the rainforest would mean a massive loss of biodiversity and dump more CO2 into the atmosphere.

Some computer models have suggested that continued burning and clear-cutting of the forest could reach a tipping point where the rest of the forest dries out and dies off; even if that does not happen, further destruction of the Amazon could irreparably fracture its fragile ecosystem. Indigenous groups whose homes are being encroached on and illegally destroyed have called the ravaging of the forest a form of genocide.

Particularly punishing for Bolsonaro were growing calls for a boycott of Brazilian goods and European leaders’ threats to kill a major trade deal unless something was done about the fires, the Times noted. The chief of Brazil’s Armed Forces’ Joint Staff, Lieutenant-Brigadier Raul Botelho, conceded to reporters that one aim of the operation was to restore “a positive perception of the country.”

However, Bolsonaro has not conceded entirely. On Saturday, he told reporters that claims the Amazon was burning are overstated, as many of the fires are in areas that were previously deforested. He also claimed that the situation was re-approaching normalcy.

Defence Minister Fernando Azevedo also tried to put a positive spin on the situation, telling reporters that the deployment “shows the concern of Bolsonaro’s government about this issue” and that “It was a very fast response,” according to the Beast.

According to the Associated Press, journalists reported widespread areas burned in the Porto Velho and Mato Grosso regions, as well as ongoing fires, on Friday and Saturday.